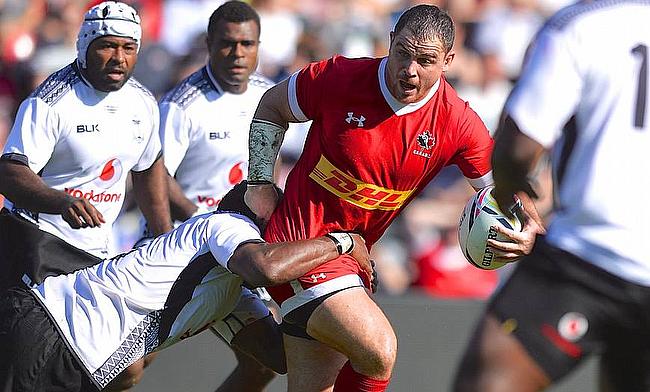 “I’m hugely thankful for the opportunity that the owners and the staff have put in me in the last year,” began Toronto Arrows forwards and defence coach Aaron Carpenter.

The 35-year-old was forced to retire a year ago following successive concussions.

“I was getting on in age a little bit, and I’m one of those people that kind of sees beyond themselves. I see opportunities for young guys and I wouldn’t want to be one of those guys that stuck around, holding up a spot for somebody that was pushing hard,” said a reflective Carpenter.

Finishing his career at Doncaster Knights, Carpenter played at several Championship clubs, picking up 80 caps for Canada along the way and now he is preparing for his new venture in the MLR.

“I got this opportunity to come back home, where my family is from, and I wanted to take the opportunity to promote the team and give some of my years of experience, moving towards a professional atmosphere.”

Carpenter was involved with the Arrows during their exhibition season, playing fellow MLR newcomers, Rugby United New York and the Canada Selects along the way.

“There were plenty of opportunities for the young guys and it was easy to pump them up for those games. It was disappointing in the end, with some of the results, it just turned out that we needed a little bit more preparation. Come again we’d do some things differently, it’s just one of those learning processes.”

Toronto have an interesting start to the term. Playing the first eight games of the regular season away from home, Carpenter explained that this decision was largely down to the adverse weather conditions that teams could face in Toronto early in the year.

“The other side of it is the weather conditions in the southern United States,” he said. “They didn’t want to play games coming into June and July when it’s muggy and 50 degrees. We are going to target a few of those games, so we come away with a really good road record, then coming home for eight games on the trot. We should be able to finish at least top two or three.”

Toronto are blessed with a squad featuring 13 Canadian internationals, many of whom were recently in Marseilles securing Canada’s qualification for the Rugby World Cup in Japan, while the rest of the team is made up of relative unknowns, recruited from universities and the established Ontario Blues programme.

Carpenter said: “You mix the guys with that experience with a bunch of young guys and you see if you can grow those young guys into the seasoned professionals they need to be. If they don’t make it after a few years, then you find somebody else. We’re just looking to be that factory of the Canadian national team.”

With the Toronto Arrows being Canada’s first professional rugby union side, Carpenter expects the national team to improve as a result: “Our owners are high on that priority. They’ve seen what the MLR has done for the USA, getting players into the shop window and getting success. It is also a chance for the players who play here in Ontario that want to show that they’re good enough. We’re going to give them opportunities to perform at that level.”

The young coach then moved on to player recruitment, an aspect that the former Cornish Pirate was seemingly excited about: “We’ve just scratched the surface really. I’m really excited about that possibility of going to other sports. For example, everybody in the world is looking for the big locks and stuff, so let’s go to a sport with guys that might not make it and transition into rugby.

“Give them two years so see if they can get the skillset down, because they’re going to be athletic if they’ve come from a basketball background, an American football background or a volleyball background. Those kinds of athletes aren’t easy to find, but now there is a chance for them to continue in a sport they maybe started in high school but dropped away due to another opportunity.”

Carpenter is honest in his assessment of MLR’s first season, suggesting that whilst the league is already a good product, it does still have a long way to go: “You can’t expect to lose 50% of your set piece and expect to win a game of rugby. A lot of teams do this, because they want to put on a good show, so there is a lot of run and gun, not thinking about territory and possession, which for a lot of teams could catch them off guard.”

Looking ahead to next season, Carpenter gave a candid evaluation of how he feels the Arrows will fare in their inaugural MLR outing: “We’re not getting ahead of ourselves, everybody keeps trying to pump our tires up and say that we’ll do really well. We don’t want to take anything for granted. We want to be in the top four and looking for hardware at the end of the season.”

Toronto Arrows first game of the season is away to NOLA Gold on Saturday 26th January. To learn more about the team, visit the Toronto Arrows website.