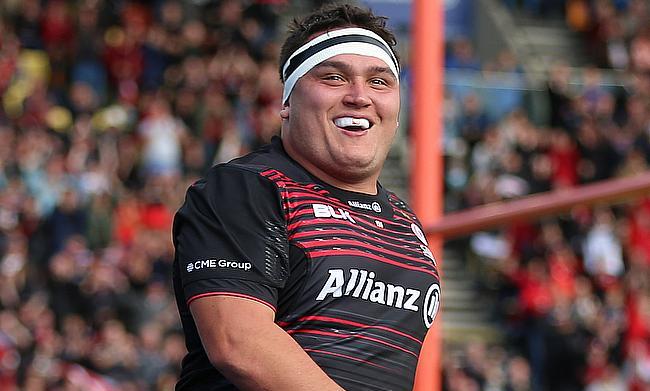 Jamie George has played for Saracens since 2009
©PA

Wasps’ ‘winning environment’ driving them to the play-offs
Erdington RFC named Gallagher Rugby Club of the Season
“Let’s not see it as pressure, let’s see it as an opportunity”: Bath and Bristol prepare for play-off weekend
The ‘desperation’ and ‘gratitude’ of an England training camp

It’s not often Jamie George comes into an England camp at the end of the season on a low. Generally, he and his Saracens teammates arrive at the door having added another Premiership or European Champions Cup crown to their collection.

This year is far different. Failing to reach the Champions Cup final and with enforced relegation, he and the rest of the Saracens players selected by Eddie Jones will be eager for some silverware as they aim to secure both a Six Nations Championship and an inaugural Autumn Nations Cup.

England will essentially be living in a bubble once the full squad for each of the competitions is announced. It will be similar to what England’s cricketers experienced this summer and fortunately, George can call on the likes of Sam Billings and Jason Roy to get a feel for the environment.

“We are slightly different in that we can’t go into each other’s rooms, so that adds another slightly different challenge to what they had,” George said. “It was interesting to hear about their experiences and I think there is always going to be highs and lows throughout this campaign, especially when you are in the bubble.

“The way that some days the lack of contact with people is going to get to people, but at the same time we are a really close knit group and we are going to be very aware that we need to be looking out for each other and be there for each other for when the potentially difficult times come.

“It was more (that you) need to look out for each other. I think they certainly had some periods that they had really great days, but they also had a couple of days, when it was raining, and they weren’t allowed out and all the rest of it.”

In both football and cricket, there have been examples of what would happen if players were to leave the bubble or violate the rules set out by the group that will be residing in the bubble. England fast-bowler Jofra Archer was fined and omitted from their second Test against the West Indies following an unauthorised trip home and the 25-year-old has since cited living in a bio-secure bubble as challenging.

In international football there have been two further examples. Starlets Mason Greenwood and Phil Foden were sent home after being pictured in the Icelandic press breaking England’s quarantine measures at their hotel shortly after making their debuts for the Three Lions.

Then in the last week, Jadon Sancho, Ben Chilwell and Tammy Abraham were omitted from Gareth Southgate’s squad after the three were part of a group of over six people that came together to surprise Abraham for his 23rd birthday.

Part of England’s leadership group whilst with the national team, George believes that it is part of his role to make sure that such instances don’t occur in this block of international fixtures.

“When we come into camp, Eddie lays out how he wants things to look,” George said. “Whenever we are in camp, everything is very much player driven and we have already had conversations with Owen (Farrell) and some of the other senior players about how we need to drive that, and it is very important.

“If the younger guys, in their first time in camp see us being pretty lax with the Covid rules, then they are going to follow suit. It is really important. We have got such strong team values that I am pretty confident that everyone will buy in.

“You realise that you have a responsibility that when you are in the England environment, that you’re adhering to everything that we want to do as a team.”

Making camp at the Lensbury Hotel, the England squad have been provided with a games room and other ways of entertaining themselves when not thinking about rugby. In the past, George and his Saracens teammate Elliot Daly have undertaken the task of entertaining the squad, providing some light relief to distract the players from the tasks lying ahead of them on and off the field.

Whilst the situation was much different last year, Jones and his players spent a significant period of time together. They had multiple camps in Treviso, as well as a six week stretch in Japan where the squad were together from the start of September all the way to the final in November.

Now, players and staff will be with one another 24/7, for roughly the same period of time. When asked by TRU if he saw some similarities between the two scenarios, the British & Irish Lion said that the World Cup experience wasn’t even something that he thought about initially.

“I hadn’t actually thought about it in that way, but that’s a very good point,” George said. “Some of the experiences that we have had, being away in Japan together, Treviso, there is certainly some similarities to what we have here, so I guess the big thing is that we are going to have to work it out along the way.

“There are certain things that we can’t do, but in terms of the training and that side of things, I think it is going to enhance our performance becaus everything that we have is at our doorstep and we are able to put a lot of our focus and our attention towards that so that is obviously going to be massive.

“That was very similar, to be fair, to the pre-World Cup campaign and when we got over to Japan. Maybe I will have to look back at what we did in Japan and that is probably a good idea for us to have a think about that and see the similarities between the two.”

George and his Saracens teammates walk into England camp in a completely unique scenario. Playing in the Championship next season, it is not yet known when the second tier of English club rugby will be starting with teams unwilling to start the campaign without fans packing out their stands.

At Twickenham, the effects of an empty stadium will be felt the most and this week, there has been a call across football for fans to be let back into grounds with a reduced capacity.

“We have got to adhere to what the government want and of course we want fans in the stands,” George said. “Twickenham is always such a special place to play and we have got such a good connection with the fans. What has been spoken about already is making sure we keep that connection with the fans, and we put smiles on faces through the way we are playing and fundamentally that is about winning games.

“Also, the way we go about it. Playing with a smile our face. So that has got to be our focus for the here and now. We can’t control if there is going to be anyone in the stands.”

Not having that clear direction on his Saracens schedule means that George will be able to commit a lot more to England with a Lions tour around the corner. Despite that uncertainty, the 29-year-old says that he has never had trouble parking his various commitments.

“You never really worry about one,” George said. “When I am Saracens, I am focused on Saracens. When I am here, I am focused on England. I feel like it is not going to be a massive issue. The fact that we are not going home too much and we are constantly here, I think just enhances the fact that we are going to be able to put all of our attention and focus on this, which I think is a massive positive.”