“Let’s not see it as pressure, let’s see it as an opportunity”: Bath and Bristol prepare for play-off weekend 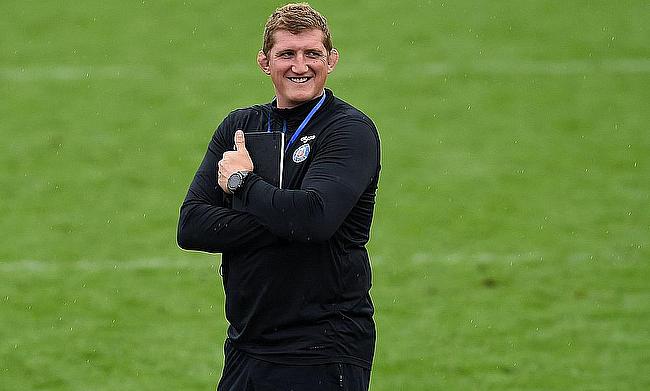 In Stuart Hooper’s eyes, the excitement and opportunity surrounding this weekend’s Gallagher Premiership semi-finals outweighs the pressure of the occasion.

The Bath Director of Rugby is speaking from experience. Hooper captained the Blue, Black and White when they last reached the play-offs back in 2015 as he guided his side to a thumping 47-10 win over Leicester Tigers.

Since then, the West Country outfit haven’t featured in the top four but after 60 minutes of last weekend’s clash against Saracens, Bath’s hopes of clinching a long-awaited semi-final spot looked extremely promising. However, the champions showcased their resilience to snatch a 17-17 draw at Allianz Park, meaning Hooper’s side were left to rely on other factors going their way.

Sale’s final day meeting with Worcester Warriors had been rescheduled for Wednesday following an outbreak of 19 coronavirus cases at the club and with Bath only managing to draw with Saracens, any kind of victory for the Sharks would have seen the men from the Rec drop out of the top four.

But another round of test results came back in the early hours of Wednesday morning and an additional five players and two members of staff at Sale were found to have the virus. The club had no other option than to postpone the fixture meaning Bath’s semi-final place, and a clash against table toppers Exeter Chiefs, was confirmed.

He swapped his boots for an ear-piece, and lead the club back where they want to be ?????? pic.twitter.com/azYmwjTI6F

“I think they made the right decision [regarding the Sale postponement],” Hooper told the media on Thursday.

“It is interesting because obviously after the Saracens game, the only thing that had happened was obviously that we drew the game which meant that our destiny within the competition was taken out of our hands.

“That was tough, but we pretty quickly switched to understanding that if we did go through, the only team we could play was Exeter. The guys, to be fair, had that moment of disappointment but we spoke in the changing room and said we can’t waste two days here. We have got to recover and we have to emotionally get ourselves ready in a place where we are ready to go and win a semi-final on Saturday.

“The waiting around on Monday and Tuesday was obviously unique and challenging, but we remained confident that the right decision would be made and prepared for Exeter.”

Before the lockdown period, Bath sat sixth in the Premiership standings and the Blue, Black and White were in need of some consistency if they were to seriously mount a challenge for a top four place this term.

But since rugby’s resumption, Hooper’s charges have looked like a side which has continually grown in confidence and seven victories from their nine fixtures has seen them make a return to the play-offs for the first time in five years.

“It was a long time ago, that!” Hooper said, when asked about his memories of Bath’s last semi-final.

“I feel incredibly proud of the group we have now. I think the whole period from pre-lockdown, during lockdown and post-lockdown, there has been a tremendous sense of ‘team’ amongst all of us. The level of perspective you get when you are not a player is that these opportunities are incredibly hard to come by.

“The players, now, are the ones who are excited and want to represent everybody that has done everything behind the scenes. They know the opportunity that is in front of them. Let’s not see it as pressure, let’s see it as an opportunity.

“The boys have been in good form and there is a huge amount of belief in the group that we can go to Sandy Park and get the win. We don’t want it to stop. We want to go there and do our very best.”

Anthony Watson shares the same hunger and desire as his Director of Rugby. The England international played alongside Hooper five years ago against Leicester, but Bath have been on the outskirts of the play-offs since then.

As the seasons have gone by, the versatile back as been driven to taste knockout domestic rugby once again and Watson admitted he may have taken Bath’s last semi-final appearance for granted.

“I remember that day!,” Watson said. “It was an unbelievable performance from the whole team. I remember Kyle Eastmond saying to me in the car that we are not going to get a better opportunity to win it [the Premiership] than this year for a while. I was only 21 at the time and I remember thinking ‘what is he on about?! Our team is on fire?!’

“We came second in the Prem, we were flying and I thought we were going to be back here next year, thinking so naively. You see how things change. It makes you appreciate when you do get to these positions, you have got to make the most of them.

“I am massively excited. It has been no secret that I have been desperate to win something with the club and on Saturday, we have got an opportunity to get one step closer. These must-win games are why we play rugby.”

As Watson and his teammates try to halt Exeter’s charge towards a domestic and European double, their West Country neighbours, Bristol Bears, visit Wasps on Saturday in the other semi-final.

Pat Lam’s side are featuring in the Premiership play-offs for the first time in 13 years and during that period, the club have yo-yoed between the top flight and the Championship.

The Bears’ current Director of Rugby took over the reins in 2017, immediately leading Bristol to promotion, and the club haven’t looked back since. Nearly exactly three years ago, they were taking on London Scottish in the second tier, but now the club’s ambitions have shifted towards the biggest prize in English rugby.

“The journey has been massive,” Lam said. “It is not easy to do [finish in the top four]. There are so many good teams in the Premiership and certainly from where we have come from, it is a significant amount of work that has got us here. We all understand that getting here is one thing, it is about getting to the next stage now.

“Because we had quite a few years in the Championship, the supporters are excited about it and they are right behind the team. We have got heaps of cards for the team coming through every day which is fantastic!”

Unlike Bath, who knew their opposition for the play-offs after Sunday’s final round of fixtures, providing they qualified, there was an element of unknown for Bristol because of the situation at Sale.

???'We are so close to being in the top four. Every Bristol player wants it.'

They discuss the top four, Pat Lam, his development and personal ambitions??https://t.co/3oWDlyJ92W pic.twitter.com/mpzFUmcU42

However, on Wednesday, Wasps were confirmed as their opponents and Lee Blackett’s side have certainly made their mark since rugby’s restart as eight wins from their nine fixtures leaves the Midlands outfit on top of the form guide heading into the semi-finals.

“We knew the potential was to play Wasps or Exeter, but before the decision was made, we cracked on and prioritised the things which we looked at that would be similar for both teams so we didn’t have to adjust too much,” Lam added. “Whilst it was a distraction initially, we just thought common sense would come through.

“I think what we have got to understand is that Wasps are on fire at the moment and they are certainly tough at their house. You have got to give a lot of credit to what Lee has done as well as their coaching group and as a team. As he says, they are playing with smiles on their faces and no doubt they will be excited. We are excited so it will be a cracker of a game.”

Bristol lost to Wasps on both occasions in the regular season, but their most recent meeting at the Ricoh Arena saw Lam select a second-string team ahead of a busy schedule for the Bears which included European duties.

As expected, the Bears boss has gone fully-loaded for their trip to the Midlands this time around and after a week of more headlines detracting from the rugby on the field, Lam hopes both semi-finals can live up to the occasion as all four sides aim for Twickenham glory.

“No-one expected Covid and everything was going nicely until that happened,” Lam added. “As long as everyone takes learnings from challenges and things that aren’t so good, we will become better and stronger out of it.

“I sort of sense for us, and no doubt the other Director’s of Rugby involved in the semi-finals this year, we sense the responsibility to have some great semi-finals. A lot of things have happened off the field, but what can turn it straight away is some great rugby. I have no doubt that Lee, Rob and Stu are keen for their teams to do well, play some exciting rugby and focus back on the game. We have a responsibility to really showcase what rugby can be like.”