The ‘desperation’ and ‘gratitude’ of an England training camp 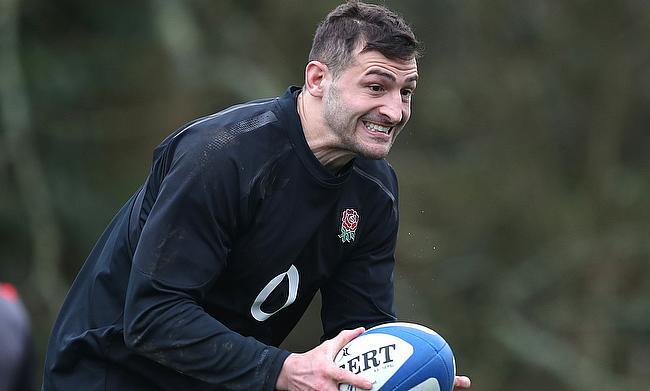 May has scored 29 tries for England
©PA

Exclusive - Rachael Burford: “We want to showcase our role models in the game to help inspire others”
Ankle injury keeps Courtney Lawes out of England's Autumn internationals
Piers Francis withdrawn from England's training squad after testing positive for Covid-19
Eddie Jones: 'Our job is to put smiles on people’s faces'

When England play the Barbarians in just over two weeks time, it would be close to eight months since their 33-30 victory over Wales.

In camp from Tuesday to Thursday this week, Eddie Jones, John Mitchell and Simon Amor have been getting an early look at the players who could play against the Baa Baas, in the conclusion of the Six Nations or even the Autumn Nations Cup.

England still sit top of the Six Nations Championship, winning three of the four games they played. After an extremely long time away from the international environment, John Mitchell is confident that the group can draw on previous experiences to help get back into the swing of things when they return to action.

“What we have experienced in the past has been fruitful,” Mitchell said. “I think we are just really, really grateful to be back preparing to play for England against another country and ultimately, we are embracing that and it is really important to us.

“I think the fact that we haven’t played competitive rugby of this level for some time is really a driver and clearly we are able to take some of the value previously, but more importantly, it is to reset our direction and where we are going and how we can maximise our opportunities.

Based at The Lensbury Hotel in London, it is a very different environment which the England players, coaches and support staff are walking in to this autumn. Twelve uncapped players have also joined this training camp. The likes of Alex Mitchell, Fraser Dingwall, Ollie Thorley, Alex Dombrandt, Alex Moon and Nathan Earle have had prior experience whilst it is a first taste of international rugby for Ali Crossdale, Jack Clement, Joe Heyes, Simon Kerrod, Lewis Ludlow and David Ribbans.

Clearly, this uncapped dozen have impressed the national selectors and no doubt have opportunities until at least the Barbarians fixture on October 25th to put their hands up. In the space of three days, Mitchell, Jones and Amor have quite the challenge to drive home all their messaging to those individuals and England's defence coach says that even in such a short space of time, players can take in a lot of the information given to them.

“You can learn a lot,” Mitchell said. “These players are very smart and it is about how you create the awareness and the thinking space around some of the stuff.

Jonny May is joined in the England squad by two of his Gloucester teammates - club captain Lewis Ludlow and 19-year-old backrow Jack Clement - and the winger believes that his teammates and other uncapped squad members will add value to the England camp.

“Lud’s has obviously played a fair bit more Prem rugby so I am happy for him to get his chance and Jack, what an opportunity for him,” May said. “He is probably pinching himself a little bit, but he is here on merit. He rips in, he is a good young flanker, a good guy and it is always great having new faces in camp.

“Eddie said it himself yesterday, those guys aren’t here to make up the numbers. There is opportunity and that always brings energy and raises the standards in training. That freshness and the desperation these guys have and the enthusiasm puts the group under pressure to get better and that is what you need in a performance environment.”

Since making his debut for England in 2013, May has gone on to score 29 tries for his country giving him one of the best strike rates in the squad. Having been a professional for the past 11 years of his career and an international for seven of those, May has experienced much change this summer.

At the onset of lockdown, the winger had just fractured his cheek and had not yet decided if he would be staying at Leicester Tigers or not. In the end, May returned to Kingsholm to link back up with Gloucester.

“The lockdown actually came at a good time for me,” May said. “It gave me a bit of a chance to ease up physically, and mentally and I fractured my cheek anyway so I was out for eight weeks. I hadn’t sorted out my contract, I didn’t know where my future was, so to have the opportunity to take a pause, reflect, refresh and reset, came at a brilliant time for me.

“I just made sure that every day I was doing everything I could to make sure that when we got going again, I was as fresh and resilient and ready as I possibly can be and I have got that energy where I really want to play all of the time and that is how I am feeling at the moment. I certainly made the most of it.”