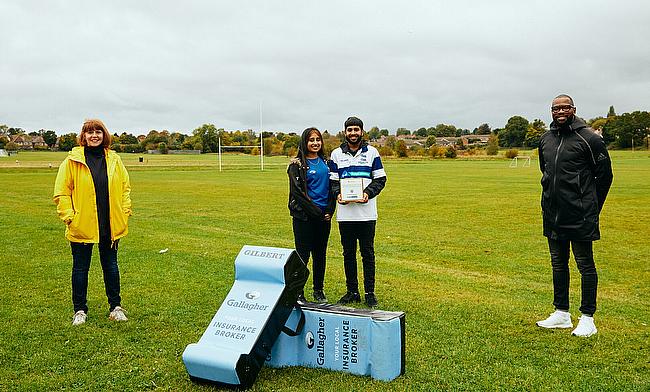 Erdington RFC have been named the Gallagher Rugby Club of the Season award having been recognised for their work in the community through rugby.

The club has been unveiled as the ultimate winner of the award in recognition of the their ‘Changing Lives Through Rugby’ initiative.

The programme provides volunteer outreach support to local police on the streets of North Birmingham and offers coaching in local schools in some of the UK’s most underprivileged communities, to engage young people at risk of being involved in knife crime.

This impressive community engagement programme follows a standing start in 2016 after the club had to be rebuilt following a major fire.

From well over 100 entries, six grassroots clubs were named as finalists for the Gallagher Rugby Club of the Season award, which celebrates and rewards local grassroots clubs that are making a significant contribution to their local community, on and off the pitch.

And @ErdingtonRugby is revealed as our winner and 1st ever Gallagher Rugby Club of the Season! ??????

An amazing win, an amazing club - watch their reaction as @ugomonye springs the surprise >#GallagherRCOTS pic.twitter.com/7uWr46bblo

Particular focus was placed on how clubs were able to demonstrate inclusivity, as well as the innovative ways in which they have increased participation in the sport at grassroots level.

Former England Rugby international, Harlequins legend and Gallagher ambassador Ugo Monye paid a surprise visit to Erdington RFC to congratulate the winners and speak to club representatives about what winning means to them and the wider community.

Ugo Monye, Gallagher ambassador commented: “There was only one winner for me for this competition. Erdington RFC shone amongst the rest of the shortlisted finalists due to their profound commitment to their community, and most notably youth participants, both on and off the pitch. To overcome such adversity in 2003 and get to the point they are at now is quite astounding and proves Erdington RFC is a fantastic winner of the Gallagher Rugby Club of the Season award.”