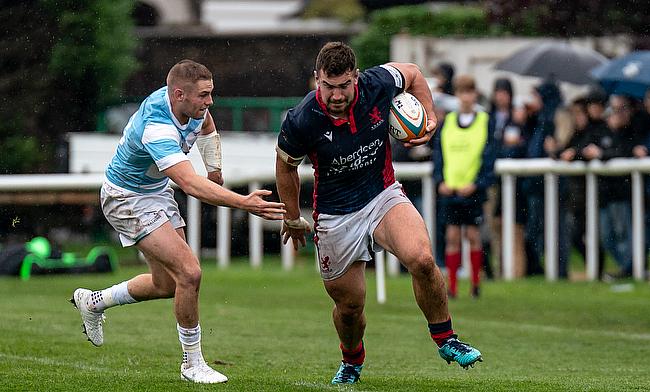 Exclusive: Harry Barlow - The former Harlequin hoping to take America by storm
Darcy Graham straining at the leash to get back to scoring tries
Zack Test - The Eagle that went to Loughborough
Lee Radford's new challenge in rugby union with the Dallas Jackals

James Malcolm believes the experiences he has gone through with Glasgow Warriors, Doncaster Knights and London Scottish in recent years will help him as he steps out of his comfort zone to move to Dallas in a few months’ time.

During the early part of the 2020 Major League Rugby season Mungo Mason, the back-row who had a spell at Edinburgh Rugby and was on the cusp of Scotland Sevens honours a couple of years ago, was tearing it up for Old Glory DC.

The rugby world was then halted by the global pandemic, but when the MLR 2021 campaign gets underway early next year, there will be an even greater tartan presence in USA’s top flight because Scotland winger Dougie Fife has joined the New England Free Jacks and, more recently, hooker Malcolm has agreed a deal with the Dallas Jackals.

Malcolm, the 25-year-old who earned 12 Scotland under-20 caps in 2013 and 2014, moved back home from London to Glasgow for lockdown and the subsequent phases, but will head out to Dallas for pre-season training, all being well, later this calendar year

“It was an opportunity that I didn’t want to miss,” Malcolm told TRU.

“Over the last wee while, I have heard great things about how rugby in America - and the MLR competition in particular - is improving and growing all of the time and I want to be a part of that.

“In the last few weeks, I have had some great chats with Allen Clarke and Elaine Vassie from the Jackals coaching team and I like the way that they think about the game and what they are trying to put in place at the club.

“For me it will be exciting living in the States, I have only ever been twice to Disneyland when I was a kid. Travelling to play the away games in lots of different places will be a different experience and I think building a culture within the playing group ahead of our first season in the competition will also be really interesting.

“The players will be coming from all over and we will have to settle into things pretty quickly when we do eventually all get together as and when Covid restrictions allow. Hopefully I can bring my experience to things and help us gel.”

“The Championship suited my style of play”

Malcolm mentions his experience and over the last few years, he has been around the professional game a lot.

He was on Glasgow Warriors books for a few years having graduated from the club’s academy in 2016 and he made 25 appearances for the Guinness PRO14 outfit - and was called-up to a Scotland training squad - before going out on loan to Doncaster in the English Championship for 2018/19.

“I loved being at Glasgow, playing for your hometown club is always a dream,” the man who came through the junior and amateur rugby ranks at Hutchesons’ Grammar, GHA and Ayr stated.

“Being there and learning from the likes of Fraser Brown was excellent, but there came a time where I needed more regular rugby and that came in the summer of 2018.

“As a rugby player you want to be playing as often as possible, so I headed down to Doncaster and enjoyed it. What I found early on was that the Championship was perhaps not as fast as the PRO14, but the set piece was certainly a big focus and that really helped me to improve that side of my game.

“The Championship suited my style of play and I just got stuck in there and tried to do my job for the team.

“While I was at Doncaster, my Glasgow contract was coming to an end, so my agent started to look around to fix me up for 2019/20 and London Scottish ticked all the boxes.

“I knew of the history of the club while I also knew quite a few people who had played down there before. They had nothing but good things to say about the place and they were not wrong.

“It us up there with my best ever rugby experiences and I can’t thank the people at London Scottish enough for their help and that season has left me in a good place ahead of the Dallas adventure.”

“I am very proud of what Rachel has achieved to date”

Growing up, rugby was always likely to feature in Malcolm’s life because his father Walter had played to a good level, but he admits he did not ever think the sport would become such a prominent thing for his sister Rachel.

She started off as a hockey player and had never picked up a rugby ball until 2015.

“It has been a hectic few years, but I have loved every minute of it."

However, fast forward five years or so and she is the Scotland Women’s captain and is preparing for a big Six Nations and World Cup qualifiers.

“I had never really considered Rachel playing rugby until she told me one day a few years ago that she had been down to training with Lichfield,” said Malcolm, who is currently training hard on his own and in the ‘bubble’ with his old pals at GHA.

“Since then, she has just taken to it and flown to the top of the game. She is a determined character and she is a natural, I am very proud of what she has achieved to date and I am sure there are more great things to come in the future for her.”