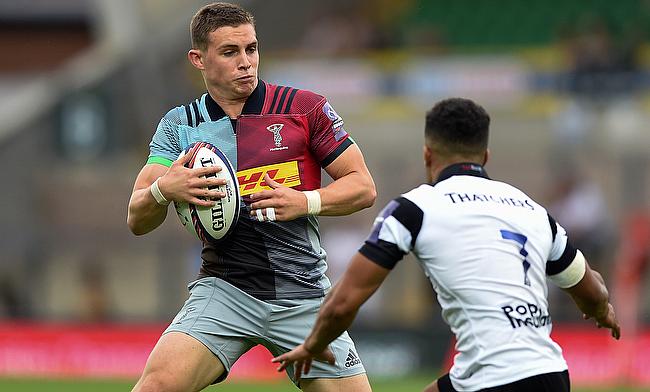 After two years at Harlequins, Harry Barlow is preparing for an entirely new adventure with New England Free Jacks in their second season of professional rugby.

It was a disrupted debut MLR campaign for New England as only five games into the year, the league was called off due to the coronavirus pandemic. After winning their first ever fixture against New York in Las Vegas, the Free Jacks were unable pick up any further victories in their final four matches and they didn't even manage to play a home game prior to the league’s suspension.

Having watched on from afar, Barlow has seen Major League Rugby grow as a competition and is excited by the prospect of joining the league. Coming to the States after two years as a professional player in the Quins academy, he is looking forward to what the future holds for him in America.

“It is incredibly exciting, just the on and off the pitch opportunities,” Barlow said. “The Free Jacks had their first year in the MLR this season, obviously it was cut short, but the stuff they did in such a short amount of time was super exciting. Off the pitch, New England as a region, especially Boston, is a hub for culture and sports.

“You have got the NFL, NHL, the Red Sox, it is just a massive base for sport in the US and an exciting place to go. Looking at the players, the new coach coming in (Ryan Martin) to the Free Jacks and the people I have already spoken to there, I just couldn’t say no. I really couldn’t pass on the offer and it is a new challenge that I am really looking forward to.”

Barlow has added motivations to head stateside. Whilst the former Cranleigh student might speak with an accent that has earnt him the nickname ‘Gentleman Harry’ already, his roots have mean that Gary Gold can consider the versatile back for Eagles selection.

With a father born in San Francisco and family spread across the country, Barlow comes to America with significant rugby pedigree. Representing England in several age grade sides, the 20-year-old is capable of playing in various positions in the backline and still has time to develop ahead of him.

“I have had my eye on the US 15s and sevens side, ever since school really,” Barlow said. “Knowing that I have that US connection, I have always had my eye on it, but this gives me a great platform to potentially get a US jersey, whether it be sevens or 15s. Yeah, that is the dream, but first I have got to focus on the Free Jacks and fitting in.

“I have always regretted not getting in contact because I was in the mix with England age grade over the years and last year with England U20s. Going over there now would be to try and prove myself, work hard and hopefully get noticed by the US coaches.”

Having been a part of the Harlequins academy since his early teens, Barlow has a good grounding in professional rugby. Joining a newly developed professional environment, he will be coached by New Zealander, Ryan Martin, who is joining the Free Jacks having most recently being with the Melbourne Rebels in Australia.

Added to this, Lubabalo Mtembu, former Sharks captain in Super Rugby, and Dougie Fife, former Scotland international, have signed on to join the team’s journey. The league as a whole is strengthening with the likes of former England captain Chris Robshaw and Fiji Sevens flyer Apenisa Cakaubalavu having linked up with San Diego and New York, respectively.

Barlow, himself, is still developing and he has been given plenty of opportunities to do so in England with Harlequins. Going out on loan to Worthing, London Scottish and Rosslyn Park to aid his development, he believes that the time in the National Leagues and the Championship will aid him well when heading to the US.

“Having had the chances to head out to those loan clubs have really taught me how to fit into different environments and get out of my comfort zone when I really don’t know that many people and especially at Worthing,” Barlow said.

“It really gave me confidence to just go out there and enjoy myself. They were so welcoming and the chance to play 12, 13, on the wings and the occasional game at full-back was really special. It was a really good time at Worthing for sure. The biggest thing I learnt there was just to enjoy myself, be less nervous before games and to enjoy it because it is a short career.”