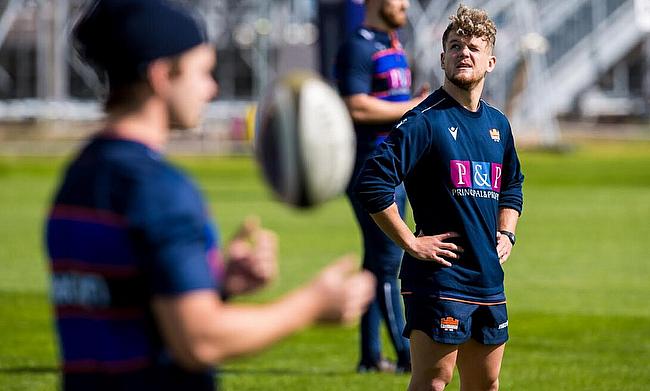 Ryan Grant: Scottish forwards certainly have what it takes to push for Lions spots
McMillan lays down the 'law' as she targets more caps for Scotland
Robbins finds balance is key as he looks forward to the future
Move south can help Jonny fulfil his ambition to roar like a Lion, says big brother Richie

Darcy Graham bagged four tries on his last outing back in January - and now the Edinburgh Rugby winger has recovered from injury and is determined to get straight back to scoring ways against arch-rivals Glasgow Warriors on Saturday.

The Guinness PRO14 2019/20 season resumes at the weekend after an extended break and Edinburgh know that a good result against Glasgow in the first clash back followed up by another against the same opponents on August 28, both at BT Murrayfield, will earn them a home play-off semi-final in their bid to win the title.

Given there has been no rugby in Scotland at any level since early March, the players from both professional sides will be straining at the leash to get back onto the pitch.

And none more so than buzzbomb finisher Graham, who suffered a knee injury soon after grabbing his four tries against Agen back in January and his setback also saw him miss the Six Nations with Scotland as a result.

The 23-year-old is now fully fit and told TRU: “I’d like to think I’ve hit the ground running in training of late, I am ready to explode back into a game now and chuck my body back into things.

?? Which GIF sums up your mood heading into match week? pic.twitter.com/55fvoFOOOg

“We’ve been cramming so much into the last four weeks at training, it’s been pretty intense and tough on the body, but it’s about getting us ready for the knocks and bumps that are coming.

“There’s always a point to prove in the Edinburgh-Glasgow games, there’s always that history behind them and it’s going to be a great match on Saturday.

“Our big focus is to win these next two games which would set us up nicely for a semi-final.

“It has been such a strange time for everybody and everyone has dealt with the lockdown and subsequent phases in their own different way. I have just been working hard because I knew as soon as we were back, big games would be coming thick and fast.

“I feel in good shape and I want to play rugby with a smile on my face again.”

“I found it very hard to watch rugby when I was injured, especially the Scotland games”

For a man who had notched five tries in his first 11 Tests for Scotland and played at a World Cup a few months earlier in Japan, the knee injury came as a massive blow to Graham who was looking to really kick on for club and country.

Initially he did manage to get back to training after Scotland’s matches against Ireland and England, but a recurrence of the knee injury during a national squad training session put him out of the next two encounters with Italy and France.

The good news for him is that Scotland are likely to face a number of matches from late October until early December - including the remaining Six Nations clash with Wales - and Graham said:  “I can’t wait to play for Scotland again, but to do so I need to do my bit with Edinburgh and find form.

“It was pretty tough getting the knee injury soon after the Agen match. I was just hitting my form going into the Six Nations and I felt I was in a good place.

“My body was feeling good and I was thinking about going out there and having a huge Six Nations and trying and push for a starting spot with Scotland.

“To get injured before the first game was gutting and to miss the whole tournament [apart from the delayed games] was heart-breaking.

“I found it very hard to watch rugby when I was injured, especially the Scotland games. That Ireland game in the Six Nations opener, I found it really hard to watch. It’s not easy, but the club were good to me at Edinburgh.

“The strength and conditioning guys know how tough it is [getting your head around an injury] so they gave me a week off at the start of the issue and then it was a case of getting back in and getting back on the horse again.”

“The back three are getting more ball and everybody is happy!”

One of the things that was most impressive about Edinburgh’s play prior to the lockdown and subsequent phases - as they went top of Conference B - was their attacking game.

It has been a ‘work in progress’ for a couple of years under head coach Richard Cockerill and assistant Duncan Hodge, but now it is firing.

A back three of Graham, Duhan van der Merwe and Blair Kinghorn will cause any defence problems and the former believes the way the centres link at the club - led by Mark Bennett - has really helped in that regard.

Missing the boys! Ready for everything to go back to normal now? . Hope everyone’s staying safe ???

“I have noticed a huge difference in the centres, if you look at the try I scored in the last Glasgow game at Christmas time for example they are going ‘hands on’ and square, there are no big loopy passes and that is something Duncan Hodge has been working hard with us on,” the winger explained.

“Going square, shifting the ball, no miss passes, running onto the ball and just working on our skills that way is helping us so much in attack. The centres are getting more touches and the back three are getting more ball just because our passing is so much better than previously and everybody is happy.

“It is really working for us, we are attacking more and we need our skills to be sharp if we are going to beat Glasgow twice and then challenge for the PRO14 title.”