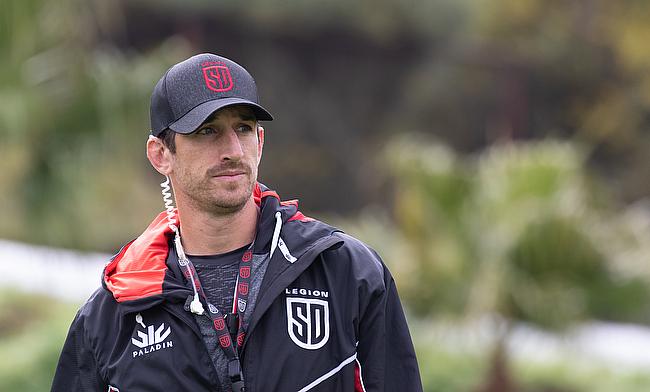 Zack Test represented the USA at the 2016 Olympics
©Griff Lacey

In recent weeks, Zack Test’s San Diego Legion side have made waves worldwide after signing Chris Robshaw from Harlequins.

For Test himself, he spent some of his formative rugby playing days in England whilst a student at Loughborough University. After a year of American Football at the University of Oregon, he won a scholarship to come over to the UK in 2008 and he came to the East Midlands with a tremendous amount of pedigree.

Growing up playing rugby in California, Test arrived at Loughborough off the back of a successful USA U20s campaign with the aim of playing rugby full-time. He even consulted with Loughborough alumni and USA Rugby stalwart, Salty Thompson, about moving to England to carry on his education there.

“It was a good jump, something different,” Test said. “I was learning a new culture, a new style of play, the level was better, and Loughborough is one of the best schools in England. It was more understanding about how I fit in the team, what I needed to do as part of the team and part of the university. It was good.

“Everyone that I came in contact with was just an outstanding person. They wanted to learn about me, I wanted to learn about them. It was very much a friendly environment where everyone was open to one another, wanting to have a good time and get the most out of their experience at uni. On the rugby pitch, it was awesome to learn the new culture and the new style of play.”

Studying sports psychology at the university, Test slowly became more and more involved with the USA Sevens set up which was slowly but surely moving towards professionalism. At the time, he felt that he had to follow his dreams of playing professional rugby so he left the XV-a-side game behind temporarily to represent his country at the 2016 Olympics prior to his retirement a year later.

Legion has been making plenty of noise in the rugby community so MLR talked to @Nthanielchannel & @ZTesty5 for an inside look at @SDLegion.?
?
Augspurger and Test talk Nonu to @ChrisRobshaw, the new coaching dynamic, Draft picks, and more. pic.twitter.com/743NnGrlNx

“When I headed out there, I had just gone onto the sevens circuit and after that first year, there would was talks that we would be going professional in the States,” Test said. “It was a decision for me to stay there to continue my studies or go and follow my dreams of becoming a professional rugby player on the circuit.

“I was really enjoying travelling the world and playing on the sevens circuit. I just made the decision based on where I wanted to go with my rugby. It wasn’t leaving the 15s game behind but cementing my status on the Sevens circuit and building my skills there, to then translate those skills back over to 15s.”

Regularly getting to catch up with his former Loughborough teammate, Phil Burgess, whilst on the World Series, Test is now able to recruit from universities for his San Diego side.

Recently, the Major League Rugby Draft took place with San Diego selecting Patrick Madden and Cole Zarcone. With the spotlight now being on college rugby, Test believes that universities in America have the capability to produce players ready for professional rugby, similarly to Loughborough.

“Loughborough has been an established university and building good quality rugby players that have gone on to play in the Premiership and all over the world,” Test said. “We have some similar set-ups over here in the United States, University of California, Berkley has been at the forefront of all that. They have produced many, many Eagles and boys have gone overseas and done very well.

“And, the college scene is continuing to grow. Saint Mary’s University has produced some very good players in the last few years and we have a couple of their players on our squad. There is also Kutztown, Arkansas State, Life University in Atlanta that are doing an incredible job so the college scene is really growing in the US and there will be many having an impact like Loughborough.”

Having been an assistant coach with San Diego since the inception of MLR, Test is now co-Head Coach with former Scotland international Scott Murray. Both have been involved with the team for some time, working together to align the forwards and backs, and before the 2020 season was cut short, the side had won each of their five opening games.

In June, San Diego became the epicentre of a lot of England’s rugby media attention. Signing former England captain, Chris Robshaw, the side is set to be a threat next season, especially if Ma’a Nonu decides to come back to southern California for 2021.

“I am very honoured to be co-head coach with Scott Murray, he brings a whole lot of experience from his time in Scotland and playing in France,” Test said. “He and I have created a really close bond as assistant coaches these last two years together and I think we have the same vision and the same drive to make San Diego one of the best clubs in America.

“We are very excited to have Chris, boots on the ground, because not only within the squad but within the community, he is going to have a huge impact and bring his experience and knowledge to help grow what we started in year one. It is an exciting time to have these big names like Chris coming over.

“Everyone in this pandemic is kind of itching to get back to sports, so I can’t wait to get Chris and everyone back in and get back to what we were doing last year before the pandemic hit.”