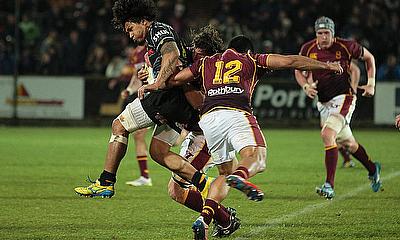 After Wellington dispatched North Harbour 43-0 earlier today to make it two wins from two, here is a preview of the rest of the action in Round Two of the ITM Cup.

Tasman opened their ITM Cup campaign with a 35-20 victory away at Waitkato. In fairness, their victory could’ve been by a greater margin, but ill-discipline cost them and allowed the hosts to get back into this contest. However, it was a bonus point win and the perfect start for Tasman.

Their opponents this weekend are Bay of Plenty and they got the job done against North Harbour as they won 20-11. It was a priceless four points against an inconsistent North Harbour who have struggled to get going in this competition so far.

The Steamers know that this weekend’s clash against Tasman which will be a tough ask after they produced an excellent performance in 2014 and continued in the same vain last week. Bay of Plenty will be looking to Keepa Mewett, wingers Tino Nemani and Chase Tiatia and fly-half Nic Evemy to inspire them to victory as they were excellent in their win over North Harbour.

Newly promoted Manawatu nearly pulled off the result of Round One as they lost 36-35 to Counties despite producing a remarkable comeback. They were 36-14 down at half-time and scored 21 unanswered points, but it was too little too late when momentum was very much with them. Despite this, they will be pleased to have secured the bonus point and their first points back in the Premiership.

As for Waikato it was a difficult day for them against the 2014 runners up last weekend and they will be searching for their first victory of the campaign on Saturday.

Waikato have re-signed Stephen Donald, but their fifth highest points scorer of all time is unlikely to feature this weekend. His team will have to be wary of Manawatu who were impressive on their Premiership return. They will be encouraged that their narrow defeat to Counties was on their travels and they will look to use their lineout once again to cause their opposition problems.

Northland were unable to regain the Ranfurly Shield after they were beaten 39-10 by Hawke’s Bay at McLean Park in Napier last weekend. The hosts controlled proceedings as they led 27-3 at half-time and they pressed on after the break.

In terms of Southland, after 80 minutes of breathtaking rugby, there was nothing to separate themselves and Auckland at Rugby Park as the sides drew 23-23. Southland led 23-16 with 28 minutes remaining thanks to tries from Kieran Moffat and Elliot Dixon – who had an impressive Super Rugby season with champions Highlanders. However Auckland fought back and levelled the scores 11 minutes from time.

The Stags now travel north knowing their performance against a very strong Auckland side will put them in a good position this weekend. As for Northland, they will have to bounce back from a humbling opening day defeat. After round one of fixtures, it seems like you have to favour Southland on this occasion.

Otago could not stop Canterbury in their opening day fixture as they were beaten 38-24 in Dunedin last Saturday.

The hosts were second best on the day with Canterbury leading 26-10 and even though Josh Dickson and Matt Faddus crossed in the second half for Otago, the game was well out of their reach. It was always going to be a tough first assignment for Otago.

In terms of Hawke’s Bay, Captain Brendon O’Conner was pleased by their performance over Southland and it was more than a great start for the Magpies. Ryan Tongia was on song for Hawke’s Bay and that maybe someone Otago will have to watch out for on Saturday.

Auckland may have felt slightly disappointed that they only drew with Southland last weekend as they had a great opportunity to seal a win in the final 10 minutes of the match.  A poor pass to Ash Moeke allowed Auckland captain Ofa Tu'ungafasi to rush up and smother him behind the advantage line, awarding fly-half Mitch Hunt with a match-winning penalty attempt, but he couldn’t convert it.

Even though Auckland were disappointed, current champions Taranaki were probably hurting more as they were beaten 19-14 by Wellington in New Plymouth. It’s a sign that Wellington’s stay in the Championship won’t last long and once again Taranaki couldn’t overcome this hoodoo against the Lions. Wellington have lost just four times to Taranaki since 1976.

Auckland will take confidence from Taranaki’s poor start, but like last week, this will be another gruelling encounter for last year’s champions. Is the pressure all on Taranaki this weekend?

Canterbury’s win over Otago put them joint top of the Premiership Division alongisde Tasman and Counties. Richie Mo’unga was on form last week for Canterbury as was Reed Prinsep with Tom Taylor putting in a solid display with the boot.

As for the Counties, they put their slow start to 2014 to bed last week against Manawatu as they flew out of the blocks with Toni Pulu scoring twice early in the game. Their ball retention was very good and their transitions from their pack to their backs were very effective. Captain Jimmy Tupou, loosehead prop Pauliasi Manu and flanker Sam Henwood were tremendous.

This weekend, Canterbury will have to watch out for the youthful backs which Counties have at their disposal. Scrum-half Richard Judd made a fine start to his Counties career whilst Piers Francis, Sam Vaka and Pulu were a threat all evening. It won’t be easy for Counties though as Canterbury could well be in the mix for the title come October.