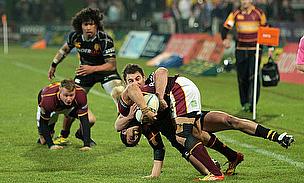 The ITM Cup 2014 kicks off next weekend - who are you backing to win?
©Scott Donaldson

We talked rugby to a great many spectators and players in 2013 about the game, its structure and its prospects. Naturally the top players featured in our discussions but so too the Heineken Cup, Top 14 and Premiership.

What was very interesting was the knowledge and passion for rugby at other levels. You can see the coverage we gave National 1 and National 2 in England plus the BUCS Rugby.

Rugby people want to see great rugby. One competition that captured the imagination of our readers was the ITM Cup and the reporting of Scott Donaldson. Here he takes us through his thoughts for 2014.

What do you love about the ITM Cup? I love seeing future stars of New Zealand rugby. I also love the ways that the provinces get behind the ITM Cup and the Ranfurly Shield also goes up for grabs - it is currently with Counties - Manukau.

There is a video above to whet your appetite. This video includes some great tries from both the ITM Cup Premiership and ITM Cup Championship.

It is great seeing exciting players like Ihaia West and Ardie Savea earning Super Rugby contracts through their performances. It is also being great seeing teams like Counties-Manukau and Tasman dominate the ITM Cup Championship and move into the ITM Cup Premiership.

The usual suspects will most likely dominate the ITM Cup Premiership. Canterbury will start as favourites ahead of Wellington and Auckland, while Counties-Manukau and Tasman are expected to battle for the fourth spot in the seven team competition.

Both of these teams now have an abundance of Super Rugby players which they didn't have in the past. Taranaki keep getting the chequebook out and import players, while Waikato look to have a rather disappointing team on paper, which is interesting given how strong the Chiefs have been in recent seasons.

My pick: Canterbury, while I think Counties Manukau and Tasman could make the semi-finals. Watch for Wellington and Auckland to go close too.

Hawke's Bay will start the ITM Cup Championship as favourites. They have recruited some quality players and will rely heavily on Ihaia West to dominate for them. Otago have the first Ranfurly Shield challenge and this could shape their season. Their coach Tony Brown has plenty of input into their success.

Bay of Plenty and Southland should round out the semi-finals, although there is usually one bolter in the ITM Cup Championship. The Stags will rely on their solid core of experienced Super Rugby forwards and Lima Sopoaga, while they have lost some of their quality young players, they have some exciting imports who could help to provide them with  some much needed X Factor, but the jury is still out.

North Harbour is probably the biggest threat to these other four teams under coach Steve Jackson. This Harbour team looks good on paper and could finally perform to their potential this season.  Manawatu and Northland are expected to struggle.

The ITM Cup Championship is home to the best mascots in my view with the Taniwha, Magpies, Turbos and Stags typifing provincial pride.

My pick: Hawke's Bay to dominate with Otago, Southland, BOP and North Harbour to battle it out for the minor placings.

Who are you picking to win the ITM Cup Premiership and Championship?