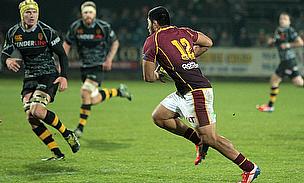 Who are you picking as the ITM Cup gets underway?
©Scott Donaldson

Waking up this morning, we expected to see reports of the Women's Rugby World Cup, the ruthlessness of England, the catalyst for rugby growth in Ireland, the French crowds and that 90 metre Canadian try.

Instead, it was ITM Cup. There was our much loved Beau Robinson from Super 15 and Sky's Rupert Cox plus Brian Moore and that 90 metre try.

The fact is that the ITM Cup has seen its popularity rise in the northern hemisphere and one guy who has helped, is TalkingRugbyUnion's Scott Donaldson. Here he reviews Round 1.

ITM Cup 2014 is here with two and a half months of provincial rugby action. The ITM Cup is an interesting competition these days without the All Blacks and with games running from Thursday to Sunday meaning that knowing team selections before the start of the round is difficult. There is also the tendency for teams to rotate their squads to avoid player burnout.

Some interesting points to note:

The early rounds usually see the odd upset before the best teams completely dominate with some massive winning margins.

Counties Manukau may struggle away from home without the Ranfurly Shield to inspire them.

Teams will rotate players depending on their schedule, so check who is playing before picking a result to avoid disappointment.

There is always the odd win by Championship teams over Premiership teams. Round 1 is a good chance with Tasman hosting Hawkes Bay.

Canterbury is favourite to win the ITM Cup Premiership, but they have lost some of their experienced non All Black regulars and so watch for Auckland to compete in 2014.

Wellington have lost too many players to injury in 2014.

I am mainly picking the home teams to win ITM Cup Round 1 matches with the exception of Counties Manukau in the first game.

There are some great games in ITM Cup Round 1 with Canterbury vs Auckland a likely final in two months time.

Southland vs Bay of Plenty is a likely ITM Cup Championship semi-final with the home ground important for the Stags. Otago, Wellington, Northland and Tasman should all win at home.

Hawkes Bay might prove to be a handful for Tasman in the cross over game, while Counties should be too strong away from home for Taranaki who may struggle in 2014.

Who are you picking?