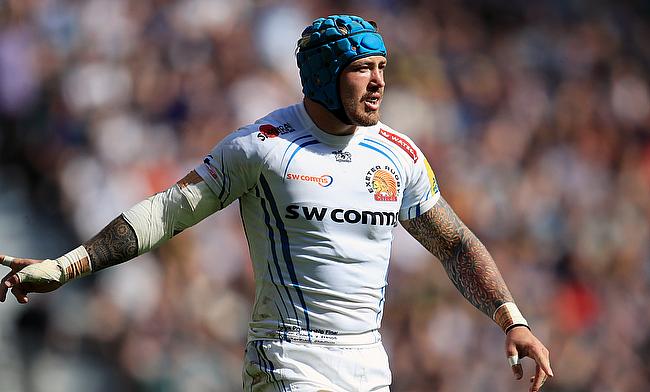 Jack Nowell starred with a double for Exeter Chiefs
©PA

Exeter Chiefs have kept their hope of retaining the Gallagher Premiership title alive as they defeated Sale Sharks 40-30 in the semi-final at Sandy Park on Saturday.

This is the sixth consecutive time Rob Baxter's men have reached the finals in the competition and will be eyeing their first back-to-back Premiership title when they face Harlequins at Twickenham Stadium next weekend.

Jack Nowell, who returned from injury for the Chiefs starrted with a double while Luke Cowan-Dickie, Tom O'Flaherty and Alex Cuthbert also scored a try apiece. For Sale, Rohan Janse van Rensburg kept them in the hunt with a double with Daniel du Preez also scoring a try but they eventually fell short by 10 points.

Exeter entered the game with a double blow of losing Dave Ewers and Sam Skinner to four-game bans while Sale had their own injury problems with AJ MacGinty, Cameron Neild and Akker van der Merwe all ruled out of the encounter. With Sam James also holding up during a warm-up session leading to the game, they were forced to make a late change.

The visitors started the game with a setback after losing Manu Tuilagi to sin-bin in the fifth minute as his arm struck the jaw of Richard Capstick, who had to leave the field for a Head Injury Assessment and did not return. With the numerical advantage on their side, Exeter stepped up the gears as Cowan-Dickie led with their opening try in the 6th minute and four minutes later Henry Slade sent O’Flaherty over the line. Skipper Joe Simmonds managed to kick one conversion as they raced to a 12-0 start.

Robert du Preez with a long-range penalty kick in the 18th minute started the proceedings for Sale Sharks but his effort was cancelled by Simmonds, who slotted a three-pointer in the 24th minute. With Rohan Janse van Rensburg and Nowell trading tries the scoreline became 22-10 in an action filled opening 30 minutes.

As the break was approaching, Sale Sharks managed to reduce the gap down to nine points with du Preez kicking another penalty as the teams finished the opening half with a 22-13 scoreline.

Simmonds with a penalty kick early in the second half restored 12-point lead for Exeter but Sale clawed their way back after Arron Reed went past Slade to set up Janse van Rensburg's second try in the 46th minute and du Preez improved making it 25-20. Nevertheless, Nowell once again showed his class with brisk pace and movement as he went past the defence of the visitors to dot down in the 51st minute and Simmonds' conversion made it 32-20.

Another penalty kick from du Preez kept Sale in the game but a cross-field kick from Simmonds caught them by surprise as Cuthbert seized it to cross the whitewash in the 67th minute as Exeter went into the final 10 minutes with a 17-point cushion. Daniel du Preez with a touchdown in the 71st minute provided Sale a hope but with no further breakthroughs, they could not narrow down the gap further as Simmonds slotted another penalty kick in the 77th minute to ensure Exeter reached the final for the sixth consecutive time.