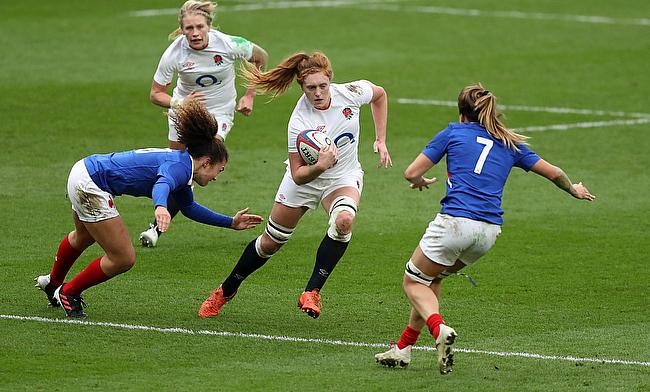 Why England’s Red Roses are under ‘no illusions’ heading into the Six Nations final
Highlights: Women's Six Nations - Round 3
Maud Muir Exclusive: The teenage prop making an impression for Wasps and England
Finding Her Voice: Danielle Waterman speaks out about gender inequality and online abuse

Saturday marks yet another opportunity for England to continue their dominance in the northern hemisphere.

For a side that has won their last 13 Six Nations matches, suffering a defeat has not appeared on their radar in this competition for over three years.

The Red Roses will be looking to maintain the status quo when they take on France in this weekend’s final, but if they are to get one over their nearest rivals, Simon Middleton may well be looking for his whole squad to contribute once again.

Last time out, Italy made the Six Nations champions graft for their win in Parma, but England’s replacements helped swing the pendulum in their favour in the second period.

Amongst those who made an impact from the bench was Harriet Millar-Mills, and she also scored the Red Roses’ fifth try as they cut loose to secure a 67-3 victory.

“It was pure luck, wasn’t it?!” Millar-Mills laughs when we discuss her score. “Alex [Matthews] did all the hard work! Her run was so good. I did the simple bit!

“The whole game was a real test, though. For 50 minutes, it could have gone either way and Italy were the better team in the first half. Both teams were fighting for everything, but it also meant we had to change what we were doing so we all had to make a difference.”

Her try-scoring exploits may be a welcome addition to Millar-Mills’ own highlights reel. The 30-year-old is playing with a smile on her face again after a horrendous run of knee injuries which saw her miss 22 months of rugby.

Before the Wasps star was restored to the international set-up prior to the 2020 Six Nations, her last appearance for the Red Roses was in the 2017 World Cup final against New Zealand. Even on her return, Millar-Mills’ playing time has been stop-start due to the Covid-19 pandemic, but the forward now feels like she is back on the right track.

“My motivation for coming back was because I wanted to play rugby and I love playing rugby,” says Millar-Mills. "My mindset when I was rehabbing was if I am not good enough to play for England anymore, then that is not a problem. I am going back to play rugby. If England happens, it happens.

“So, it is nice to score, but you have to keep working hard to get better, fitter, faster, stronger. During the times when I was out, the levels of fitness and the standard went up. When I first came back, I knew I wasn’t the same player and even before that, I didn't know if I wanted to carry on.

“I started to get back on form towards the end of the Six Nations last year and Covid happened. I started to get into form just before Christmas and then we had a break in the Premier 15s and I think until I have a good run of games, I don’t get my eye in. It is only now that I am getting back to the player I was before.”

Millar-Mills has been named in Saturday’s matchday squad to face France, the team she earned her first cap against back in 2011. She began her love affair with rugby at local club Manchester before moving to different teams including Chester, Sandbach and West Park Leeds.

She then represented Lichfield Ladies, Firwood Waterloo and Bristol prior to her move to Wasps in 2017 and both the domestic and international scene in England has taken steps forward throughout her journey in the sport.

This year, the Allianz Premier 15s is arguably flourishing more than ever - despite the challenges of the pandemic - whilst the Red Roses’ progress since the introduction of full-time contracts in 2019 has been unrelenting.

The coverage of the women’s game is also increasing and after the BBC stepped in to buy the rights for this year’s Six Nations [with the Red Roses’ first two fixtures shown on the iPlayer], it means England’s final with France on Saturday will be broadcast live on BBC Two.

I cannot comprehend how BBC 2 are showing a recycled 2014 episode of Flog It! (which has already been shown 6 times before) on Saturday while England are hidden away on BBC iPlayer. Yes we are grateful etc, but this is the ultimate insult to women's sport https://t.co/DZHyOX2pB3

“It is great for women’s rugby that it is on the BBC because it means it is so accessible,” says Millar-Mills. “We all know people who look for something to watch and scan TV channels, but Saturday’s match is something they can now watch if you know what I mean?

“We might actually tap into an audience that otherwise might not have tuned in. When it is on Sky or BT Sport, people wouldn’t have switched over if they don’t pay for those channels. Being on terrestrial TV, we might attract a different audience that wants to watch it if they are just scanning the TV guide.

“For my first cap, it wasn’t even streamed! There was no footage of it. My Dad tried to follow it on Twitter, I think! The first tour after that, there were actually updates on the radio. We weren’t even in the radio era then!

“People didn’t think women’s rugby would get a crowd so they didn’t show it. It is that awful wheel of nobody wants to invest money into it because nobody watches it, but nobody is going to watch it until it is put on TV and invested in.

“Somebody has got to break the cycle and say ‘we are going to support the game’ because that is such a key part in the development of the sport and I do mean the whole sport and not just England. If it is accessible for people living in Wales for example, then they will look to their local team. It is not about ‘I want to play for England?’ It is about ‘I want to play rugby.’”

If England and France serve up another dramatic fixture as they did at Twickenham last November, then this weekend would be a perfect advert for the women’s game.

Both autumn clashes - which were shown on BBC Two - reached a combined audience of 1.91 million and it emphasises Millar-Mills’ point about making the game more accessible.

The Red Rose also believes the postponement of this year’s World Cup in New Zealand - due to the Covid-19 pandemic - will only help create a better spectacle for potential broadcasters and consumers.

“Time is never a bad thing, is it? The Prem 15s is continuing to push our own performance levels because our league has been able to go ahead this year, but imagine those other players who haven’t been able to play any league rugby because of Covid? Imagine them going into a World Cup under-prepared? Imagine what that does for their own development?

“In order for us to grow the game, you need to have really good games so people watch it and enjoy it for what it is rather than just thinking ‘it is just women’s rugby.’ The only way you do that is by giving players every chance to perform at their best so it is better for the game that it has been pushed back.”

Although Millar-Mills is looking at the bigger picture over the next year, England’s growth and development will also be at the forefront of her mind.

The balance of experience and youth is a formula which Middleton is still tinkering with and Millar-Mills’ versatility is certainly adding to the strength and depth which the Red Roses boss has at his disposal.

“It makes me a great sub!” Millar-Mills jokes. “Honestly, it is something I am always working on. If I am versatile, at least I can give it my all in all these different positions. I have the experience of playing four, five, six and eight so I could do a job!

“I think it is a testament to Midds and testament to the squad. I think if you had to pick your England team, I think everyone’s would be different because everyone in the squad has a different role and has such a big impact. Even when we make subs, the team is almost just as strong because of our strength in depth."

Whilst England’s fully-contracted players stayed in camp last weekend, Millar-Mills was back balancing her job as a maths teacher alongside playing for Wasps in the Allianz Premier 15s.

After returning to the classroom on Monday, the equation for Millar-Mills and England is now their only focus. Clinch a seventh straight win against France, and a third successive Six Nations title will be secured.

“I think winning any Six Nations is memorable. In the past, teams have had their periods of success. Ireland won it for a few years running as have France, but we are on top at the moment and it would be nice if we stayed there after Saturday! We know France’s quality and they showed that against Ireland last week in their excellent victory so it will be a challenge and an opportunity we are looking forward to.”

The Women's World Cup is taking place next year, but what about being part of the Men's competition in 2023? Find out more via sportsbreaks.com here