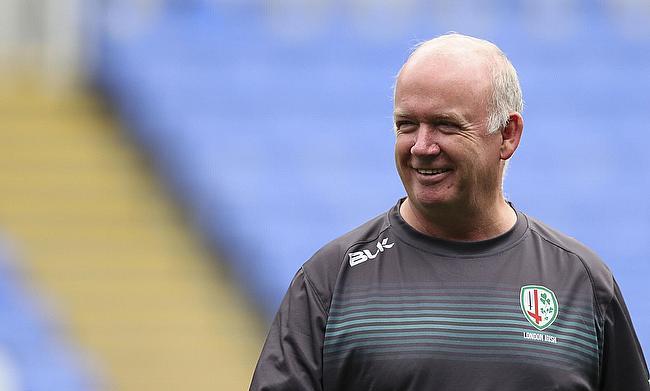 Alex Lewington Exclusive: 'It’s more about driving our own standards'
Video Highlights: Gallagher Premiership - Round 11
Northampton Saints’ David Ribbans: Sometimes you have just got to grind it out
Match Centre: Wasps 10-16 London Irish

There have not been too many times in recent seasons when London Irish have found themselves on the cusp of the top four.

Beating Wasps 16-10 last weekend, it was a tenacious effort by Declan Kidney’s side to take home the win. The boot of former Ireland international Paddy Jackson, as well as Ollie Hassell-Collins’ try, was enough to help the Exiles maintain their chase for a top-half finish.

On Friday night, they face a Leicester Tigers outfit who fell to a 17-3 defeat against Bristol Bears last time out, but Steve Borthwick has named a near full-strength side to take on Irish.

A bonus-point win for the Tigers could see them draw level on points with their visitors, but London Irish did beat Leicester 22-9 at the tail end of November at the Brentford Community Stadium.

The Exiles head into this game having won three of their last five matches, their only loss coming three weeks ago away to Exeter Chiefs.

Arguably, the team’s key performers have not been their international superstars who were brought in to help the club re-establish itself in the Premiership. Instead, youngsters such as Tom Parton, Ben Loader, Theo Brophy-Clews and Hassell-Collins have all stepped up.

Arriving in West London nearly three years ago now, Kidney says the recruitment of Sean O’Brien, Waisake Naholo, Nick Phipps, Curtis Rona, Adam Coleman and others, has helped the younger players at the club learn the game as a professional.

“When we arrived, I was wondering how come all these young lads were leaving?” Kidney told TRU. “Joe Cokanasiga, Jonathan Joseph and Anthony Watson had gone. The club has produced a lot of good players and I was just wondering why they were leaving.

“I think part of it was because maybe they didn’t have the players to look up to, so I think that’s why we tried to get in a few players what would help set a bit of standards and also they would have to look up to some of those. The back three are working off Waisake. We have a couple of hookers in the first year of our academy, and they are working off of Gus (Augustin Creevy).

“What Ben (Donnell) is picking up off the likes of Sean O’Brien and Blair (Cowan), and lads like this, I like to think you can’t quantify it.

“That can rub off on them and it has helped them to say ‘okay, now I know where I stand’, rather than them just getting on the team, playing a few matches and why it is not working out. They actually know what it takes to get there.”

It is this attitude that Kidney is using to create a London Irish side that should hopefully be competitive in the years to come rather than the yo-yo team which they have been labelled as in the past.

Asking Kidney if he would define a characteristic of his team, the Irishman was quick to say that he would not do so, but did heap plenty of praise on his playing group.

“The minute you use a word, it is like you are putting us in a bracket,” Kidney said. “I think we show some of the good aspects of rugby. I think we fight for one another. I think there is a generosity in the team, that players play off one another. There is no stars in it and I think they are ambitious as well.

“They are looking to improve, so again, I think the trouble is you give a word in a session like this and then that is us bracketed, but we’re different but we don’t try to be. I must say, I have obviously worked with a couple of groups, they are a smashing group to work with because there is such a diversity in the group.

“I suppose that is even in the nickname, the Exiles. We are from 12, 13 different corners of the Earth and we have lots of different personalities that come into that, but they are good lads and we’re just learning off one another.”

For Friday's meeting with Leicester, Kidney has made six changes to the side that started last weekend in Coventry, with Will Goodrick-Clarke and Lovejoy Chawatame coming in to start in the front-row. Rob Simmons starts at lock, whilst Blair Cowan and Albert Tuisue add some bite to the back-row.

?? Mafi X Simmons in the row
?? @TerrenceHepetem in at 12
?? @_loaderr and @OHassellcollins on the wings

The only change in the backs sees Terrence Hepetema replace Brophy-Clews at inside centre as the 29-year-old prepares to face his old side.

Having played for Leicester between 2013 and 2014, he believes his former club will be relishing the visit from the Exiles despite the Tigers' poor result on the road last week,

“If you look back to that Bristol game, they rested a lot of players,” Hepetema said. “They probably have targeted us as a big one, a home game, Friday night, on BT Sport, they will be up for it.

“I think if you look too much into past form or dropping a few games here or there, you can become complacent so we are not too worried about their previous performances. We know they will be on the ball on Friday night.”

Leicester’s last home game was a 27-8 win over Wasps, and despite being reduced to 14-men for the majority of the fixture, the Tigers were the dominant side thanks to the territory-based game orchestrated by Richard Wigglesworth and fly-half Zack Henry.

Whilst Irish are more than aware of how their hosts are likely to play, Hepetema is keen to express that he and his teammates must focus on themselves before getting too worried about their opposite numbers.

“We definitely look at them, we would probably look at key trends,” Hepetema said. “They like to kick a lot. They are willing to kick all the way up to halfway, even over halfway, so our back three will be ready for that.

“But, I think when it comes down to it, we have got to get our own stuff right and look after our own backyard before we worry too much about what they are going to bring.”