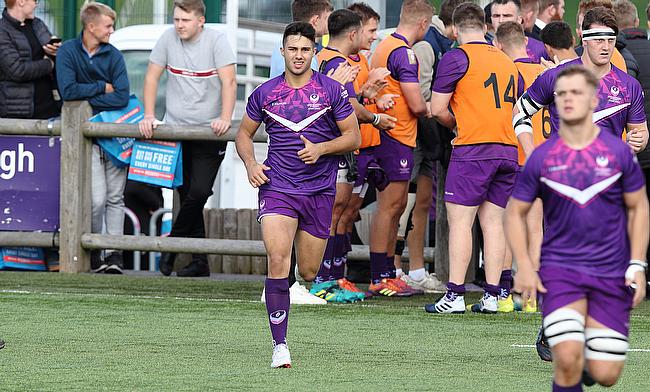 Dan Kelly was born and raised in Manchester
©Still Sport

University of Bath’s Aaron James - 'It's great to be part of a pretty good story'
Hugo Stiles: Former BUCS Super Rugby star on life in Hong Kong
Jake Cooper-Woolley: Going to university was ‘very beneficial’ for my rugby career

Brought up in Greater Manchester, Dan Kelly first picked up an oval ball at Rochdale RUFC as an under six, playing a good amount of his rugby there before attending Kirkham Grammar for his sixth form education.

Part of the Sale Sharks U18s side as well, Kelly played alongside many of his school contemporaries. The likes of Kieran Wilkinson, Sam Dugdale and Teddy Leatherbarrow were the year above Kelly, all of whom are now able to call themselves professional rugby players.

“To be fair, I would say that was the changing point when I was 16,” Kelly said, when asked about his time at Kirkham.

“I was looking to go to college and Kirkham was such a great place and there are about seven internationals in the year above me in my first year there.

“Learning from them guys really drove me on and it is the same with what has happened at Loughborough. I was around good coaching and talented people. It just kicked me on a bit further. Kirkham was massive education wise and rugby wise. Aled Trenhaile has done a lot for me and really helped me over the last two years.”

Cannot thank @KGSrugby and this man enough for the last 2 years. A great set up full of great people @KirkhamGrammar pic.twitter.com/qCZUOvmMnc

Not picked up by Sale Sharks for an academy contract, Kelly made the decision to further his education at Loughborough. Going straight into the National League side, Kelly played 13 games at the weekend before going into the BUCS Super Rugby side.

“Coming straight from schoolboy level, where the lads aren’t particularly massive but are very skilful, going to Nat 2 where you are playing against 25-year-old's who are fully grown and just want to smash you to pieces really, it is good to adapt,” Kelly said.

“I had to adapt my game and then go into BUCS, again where there are some skilful players. It has been really good for my game, I would say, to adapt to different sorts of playing styles in the different leagues.”

Loughborough finished their regular season fixtures in BUCS Super Rugby last night, the side running out 48-26 winners against Swansea in Wales. Not playing a part in that game, Kelly is expected to be involved in their play-off run over the coming weeks when the side face off against Cardiff Met.

In National Two, Loughborough have struggled for consistency this term. For a while it had looked as though they could make a tilt for the play-offs, but a slump in form has meant that any likelihood of an immediate return to National One decreased.

Over the yearsm the university has become well known for churning out high quality talent. The likes of Ben Kay, Sir Clive Woodward, Phil Burgess, Fran Cotton, Henry Pyrgos and many more established names have passed through the doors in Leicestershire, with Kelly expected to be one of the next players to flourish after his time in the East Midlands is done.

Irish qualified, Kelly’s performances in purple were recognised by Noel McNamara and his coaching staff, who snapped the centre up for their Six Nations campaign. Kelly, remaining honest, believes that it was because of his game-time in the United Kingdom that allowed him to showcase his talents.

“The likes of Gerard Mullen and Jim Henry have really helped me to kick on and obviously there is a real good programme here,” Kelly explained. “As a player we have a team in BUCS and a team in National Two and the amount of minutes that I have played, I couldn’t have asked for any more game time, as that is where you improve.

“It has given me the opportunity to play this good quality of rugby. The training has been unbelievable every week, so I suppose as an individual, I have really come on leaps and bounds since I have come here.”

Playing in each of Ireland U20’s Six Nations games this year, the final two postponed due to the coronavirus, Kelly was one of the most consistent performers and started against England at Franklin’s Gardens when the Irish blew their hosts away with four first half tries.

“I may stick out a bit more because I don’t sound Irish but, to be fair, the boys have integrated me really well,” Kelly said. "I’ve not felt like a spare part at all and we’re all as one really. I like that camaraderie between one another, that closeness has made us even better and has helped us on the pitch.”

Before their final two fixtures were postponed, Ireland were top of the U20s Six Nations table on 15 points, three points ahead of France, but still with a game in hand on their opposition. It is unclear when these games will be rescheduled for so the next opportunity that Kelly will have to rejoin his Ireland teammates will be this summer at the World Rugby U20 Championships in Italy, with the competition a huge motivation for the 18-year-old.

“I’ve just got to keep improving, try and get as far as we can in BUCS with Loughborough and then if I am in good form, I’ll get picked for the junior world cup this summer, which would be amazing if I was.”