by Will Sherrington  Friday 19 February 2021 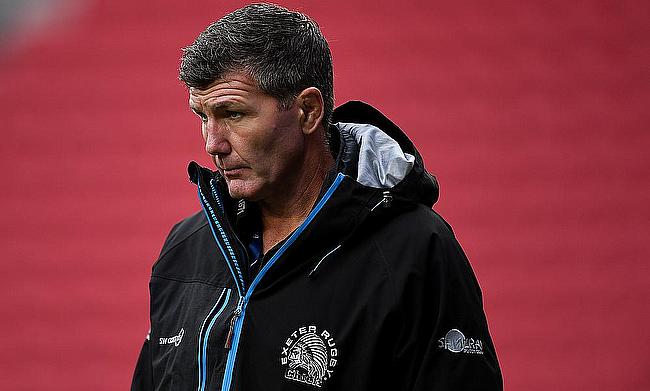 Exeter, who have won their last three matches, face a resurgent Northampton Saints side this weekend
©INPHO/JMP

Second in the table and gunning for back-to-back Gallagher Premiership titles this year, Exeter Chiefs go into the weekend in sterling form ahead of their clash with Northampton Saints.

Chiefs will be hoping to put the pressure on league leaders Bristol Bears as their title defence starts to take shape.

‘Focus’ seems to be the buzzword in the Exeter camp as Director of Rugby Rob Baxter feels the recent run of three consecutive wins has been down to hard work and belief.

“Defensively, we’ve stepped things up well. We’re looking hungrier in defence again, and we’re making a lot of tackles on the opposition side of the gain line, which are good and disciplined collisions.

“That’s something that we will look to carry on with. Our defensive systems don’t change all that much depending on who we play."

Northampton surprised a few last time out as they earned a well-deserved 22-17 victory on the road against 2020 Premiership finalists, Wasps.

The Chiefs boss is wary of the quality in the Saints squad but insists he is focusing on his own team’s game in his match preparation.

He said: “We’re aware that Northampton are a good side and that they’ve got threats. We’ve played them plenty of times, and we’ve had mixed results against them, and they’ve played very well here [at Sandy Park] in the past too.

“We are very inwardly focused on what we’re trying to achieve, our energy, and our drive at the moment.

“Northampton will be the same. They’ll feel they’re going pretty well at the moment, and their biggest focus will be themselves; it won’t be us.”

Last weekend, the Saints weren’t in action after their clash at home against Newcastle was cancelled due to positive Covid-19 tests in the Falcons camp.

Baxter believes break weeks can work either for or against a team but suggests it could give Northampton a boost ahead of Saturday’s fixture.

“If Saints have used this week off really well, it could energise them. If they haven’t used it well, they’ll be a very similar side to what they were a week ago. We’ll only really know with hindsight.”

Retaining the title will be the main objective for Exeter this season, and as we approach the halfway mark in this campaign, the Chiefs sit just one point shy of league leaders Bristol, which is testament to the players’ desire to win and win again.

Baxter has been instrumental in cultivating the winning mentality at the club. Despite interruptions to the schedule this season, he believes he is getting the best out of his ‘well-oiled machine’.

He said: “What we’re actually doing is focusing on each game really well and I wouldn’t say that is necessarily going through the gears. I think that it is just maintaining a focus.

“If anything, we’re probably just a good old diesel that’s chugging along pretty nicely. We’re not reporting too many faults at the minute, and there are not many gears grinding. On the whole, we’re working hard, and we have very good foundations.”

The Six Nations has stretched Premiership squads this year more than ever. Looking for strength in depth, the Chiefs can call on 24-year-old fly-half Harvey Skinner who will start on Saturday afternoon.

Skinner was impressive against London Irish last weekend after coming on as a substitute. He looked sharp, and his maturity beamed through in his understanding of the importance of his role in the team.

“As a ten, you’re the voice, and you’re calling the shots in attack. If you’re quiet, then things aren’t going to happen around you.

“You’re the guy that needs to boss things, and if you’re coming on and looking for extra stuff to do that we don’t do as a club or a team, things aren’t going to go to plan.

“For a guy coming on as a ten, especially me, you’ve just got to stay in the system and the opportunities will come. As long as the team plays well, that’s the main thing.

Hoping to use his first-team exposure to nail down a starting position, Skinner praised the competitiveness and depth seen in the Chiefs squad during the Six Nations period.

“The international boys are playing international rugby for a reason. We have such a competitive squad that if you’re in the non-23, you’re still training, trying to impress, and you’re keeping on top of your game.

“It shows as since the Six Nations boys have been away, we’ve had boys coming in to fill their spots that are doing just as good jobs.

“When they come back, those Six Nations boys have got to put in the extra groundwork to get back in the team. It’s good to have these competitive places all over the park.”

Reflecting on Skinner’s recent performance against London Irish, Baxter underlined the importance of the fly-half’s teamwork and commitment.

He said: “I thought he looked very good. Harvey has been running in and around a 15 in our 15 on 15 stuff for nine months flat out, and he’s been one of the key drivers of that and I think that showed at the weekend.

“He showed he was very capable of stepping in. He talked very well, which was important and he showed a real understanding of what we wanted in our set plays."