by Will Sherrington  Thursday 14 January 2021 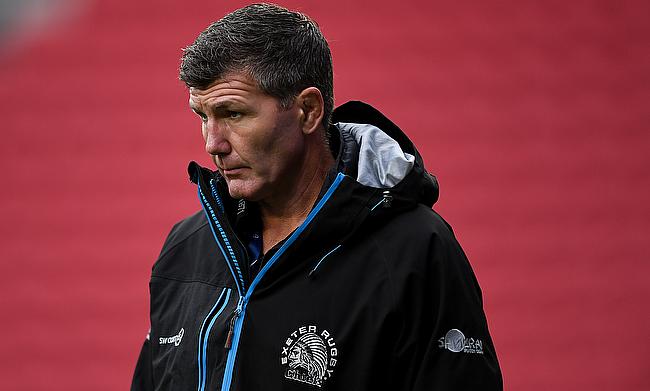 Champions Cup and Challenge Cup competitions suspended temporarily
Match Report: Gallagher Premiership: Exeter Chiefs 7-20 Bristol Bears
Rob Baxter: “Getting over it is no different to what we have always done
Exeter's Rob Baxter and Joe Simmonds among New Year Honours

Despite calling for league games to be brought forward to fill spare weekends and aid potential fixture congestion, Rob Baxter has revealed he now believes the break is the correct decision for the sport.

This comes after the PRL ordered a two weeks pause to the competition whilst the EPRC also suspended rounds three and four of the Champions Cup after the French government advised their clubs not to travel due to Covid-19.

Baxter said: "From a rugby perspective, I don't mind saying that I was one of the people who said this is an opportunity to free up weekends later down the line.

"It does seem now that that is not being considered as one of the options and we're not going to over compress the calendar. So now, with hindsight, a couple of weeks break feels in the bigger picture, the right thing to do."

At a time where the UK is in national lockdown, the Exeter boss believes that it is sensible to align rugby with the rest of the country.

He said: "The reality of it is, as much as we all want to continue playing the sport, we do also respect the fact that we are some of the privileged few that have been allowed to carry on in some kind of normality compared to a lot of people.

"The Covid situation has to take precedence, and because of that, we just have to get on with it."

Exeter's Champions Cup defence is now in doubt with their remaining group stage fixtures against Toulouse and Glasgow Warriors postponed.

Baxter intends to focus on taking advantage of the break, seeing it as an opportunity for his squad to regroup and get back to full fitness ahead of their Gallagher Premiership game away to Worcester at the end of the month.

He said: "We were thinking that there was a big game coming this weekend against Toulouse, but I think we've known for a few days that that was unlikely to happen.

"For us in particular, with the amount of rugby we've played in such a short period with only a two-week break between seasons, we've now got three weeks to prepare for Worcester, which is twice as long as our pre-season preparation for our first game of this season.

"There has been a fair amount of player engagement this week which has been really good. The break has given us the time to talk about what we didn't genuinely get to address in pre-season and that's why I'm hopeful that this will be a positive period for us."

Last month, Exeter Chiefs suffered with an undisclosed number of Covid cases amongst players and staff causing them to forfeit their December European Champions Cup fixture against Toulouse.

Four weeks on, the Chiefs have now fully recovered from the outbreak. Baxter considers his team fortunate given the circumstances and believes his players are mentally strong as they head into the second half of the season.

He said: "Whatever anybody says, there is an element of fear to catching it. If you've gone through your period of isolation, your family are ok, and everybody you know is ok, there is an element of relief. So I think that most of the guys are mentally ok with [having had Covid-19]. I don't think anybody has got what you'd call a 'mental hangover' from it.

"It has affected everyone slightly differently. We're very fortunate that it doesn't look like anything long term. We don't now have players or staff who still have issues and are still struggling."