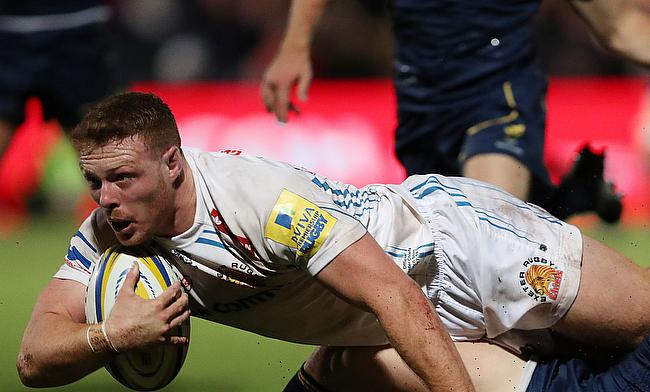 Sam Simmonds continued to be impressive for Exeter Chiefs
©PA

Exeter Chiefs have reduced the gap over top placed Bristol Bears as they defeated London Irish 26-3 in the ninth round of the Gallagher Premiership at Sandy Park.

This is Exeter's seventh win from nine games as they continue to be at second place with 33 points while London Irish are at sixth place with 22 points.

It took Exeter Chiefs just four minutes to get their first points on board when Sam Simmonds powered his way over the line with his brother Joe Simmonds converting to make it 7-0.

Rob Baxter's men doubled their tally 10 minutes later when Jack Yeandle found Sam Simmonds and eventually Dave Ewers went over the line with Joe kicking the conversion to take their lead to 14-0.

As the Chiefs were penalised for not rolling away, London Irish got an opportunity to open their account with Paddy Jackson slotting a straightforward penalty goal to reduce the arrears to 11 points before the home side lost skipper Joe to a nasty head blow just before the break.

The Chiefs were the quickest to get off the block in the second half with Alex Cuthbert broke through to dot down and Joe's replacement Harvey Skinner kicked the conversion to make it 21-3.

Exeter made a series of attack in search of their bonus point try but London Irish were stern in defence but the breakthrough for Rob Baxter's men eventually came in the 72nd minute when Motu Matu'u was sent-off for a high tackle on Ian Whitten, who had to leave the field and was replaced by Sean Lonsdale with the replacement immediately finding himself in the thick of action as he fed Sam for his second try in the game.

Skinner missed the conversion but Exeter done enough to complete a 26-3 win as they look to reclaim their top position in the table.