Henry Slade: Looking forward to 'getting one over' his Exeter teammates 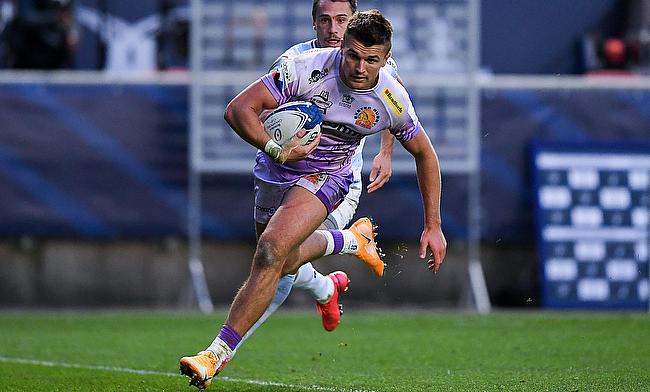 Wales head coach Wayne Pivac: “The Six Nations is where we are going to be measured”
England don’t need any ‘extra motivation’ for Calcutta Cup clash
Jack Cosgrove Column: 'England are an excellent side, but there will be a quiet confidence in the Scotland squad'
Cameron Redpath to make his Scotland debut in Six Nations game against England

“I’ll look forward to catching up with both, but I’d like to get one over on Hoggy, that’d be good,” Henry Slade told TRU when asked about which of his club teammates in the Scotland team he’d like to get the better of this weekend.

Having won a Champions Cup and Premiership title with Scotland captain Stuart Hogg and lock Jonny Gray last year, Slade will be putting friendships on hold at Twickenham on Saturday afternoon.

On face value alone, the Scots' impacts on Exeter has been massive. Having only progressed from the Champions Cup pool stage on one occasion before last season, Hogg’s influence at Sandy Park, in particular, has impressed and Gray’s arrival from Glasgow saw the 26-year-old instantly become an integral part of Rob Baxter’s team.

Like Slade, Gray and Hogg will also be starting in the Calcutta Cup game on Saturday and the Englishman feels like knowing each other so well could give him and his Exeter teammates an edge in the game.

“I obviously play with Jonny and Hoggy, knowing little bits about them, what they like to do probably does help,” Slade said. “But it definitely adds to the mental side of things and getting up for it and getting one over on those boys would be good.

“Next time we see them, it would be good to catch up over a coffee or something. I’ll definitely be a lot smugger if we win.”

With the @SixNationsRugby returning on Saturday, myself and @c_heal were joined by @Charlie_Beckett to preview the tournament.

Here is a clip of the podcast where we discussed England's Sarries contingent??

Having become a regular starter for Eddie Jones since 2017 November tests, Slade offers a left-footed kicking option, as well as being a capable distributor to keep his country on the front foot in attack.

Regularly playing at outside centre at both club and international level, on several occasions in the Autumn Nations Cup, the 27-year-old lined up with both George Ford and Owen Farrell operating inside him.

For many, having those three creative players renowned for their kicking ability made England’s game plan of continuously going to the boot for territory very clear. In particular, that skill helped Exeter in the Premiership final against Wasps with Slade's kicks to touch piling the pressure onto his opposition.

England have been adamant that they are developing an attack capable of helping them win the 2023 Rugby World Cup, but since the Autumn Nations Cup, Jones and other members of that England group have admitted that in the tournament they were unable to play the rugby they would have liked.

“We have been trying to move on our attack for a while and we have been introducing new things in the autumn that we weren’t quite able to do really because maybe the conditions weren’t conducive to it because it was quite wet a lot of the games,” Slade said.

“I know it was raining today and the weather has not been great recently, but hopefully we get a few more dry days throughout this tournament and we are able to implement what we have been working on.

“I don’t think that changes whether Fordy (George Ford) or Faz (Owen Farrell) are playing at 10. They are both top quality players. Both are very good at the line and both are very good kickers, both great leaders.

“I don’t think whichever one of them is playing at 10 makes a massive amount of difference. They are both top quality players and like I said hopefully, we can put out on the field what we have been working on.”

On Saturday afternoon, England will be coming up against one of the most unpredictable attacks in world rugby. This is primarily down to the enigma that is Finn Russell. Racing 92’s mercurial fly-half barely played any international rugby at all last calendar year, but has now made amends with Scotland coach Gregor Townsend and has been in fine fettle since returning from injury.

When Slade and Russell last came face to face, it was the Champions Cup final at Ashton Gate. Playing for the full 80 minutes, the Exeter man scored a try and contributed hugely to quelling the Scotsman's threat.

Having had that recent experience of playing Russell, it is hoped that Slade will be able to offer the defence some advice on how they can best deal with the jack in the box player that the Scot is.

“We watched a lot of his games before that game and hadn’t played against him for a while. I think you see more actually being up close and in person. You pick up on cues, body language, where he is looking, and I think that definitely has helped.

“We will keep watching and seeing what sort of things he is up to, but generally, we have got to be alert for anything because he is fairly unpredictable in some of the things he does at times, so we are just going to have to be on alert and get ready to pounce on whatever he is doing.”