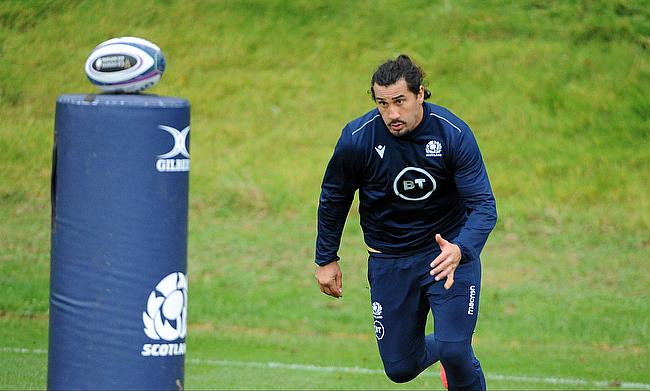 Lee Anne Steel: “Grassroots rugby is the lifeblood of the sport”
The old and the new: Cowan and van der Merwe urged to grab their opportunities
Finn Russell included in Scotland squad for Autumn internationals
Ryan Grant: Scottish forwards certainly have what it takes to push for Lions spots

When you are caught up in the heat of battle for 80 minutes, then trying to focus straight away on the next game as well as balancing club and country commitments, sometimes rugby at the top level can become overcomplicated.

Certainly, for amiable London Irish and Scotland back-row Blair Cowan that is how things felt around 2015 when he was part of the national team squad that was knocked out of the World Cup at the quarter-final stage after Australia were awarded a late penalty at Twickenham.

The New Zealand-born player only went on to earn two more caps in 2016 for the country he qualifies for through his mother - taking his tally to 17 - before he fell out of favour.

Then 29, Cowan wondered if he would ever make it back into the Scotland fold as the years ticked, however now 34, he is playing some of the best rugby of his career and was one of the in-form players at the breakdown area in the Gallagher Premiership.

It is not just on the pitch, but off it, where Cowan has rediscovered his mojo and he heads into this week with Gregor Townsend’s squad at Oriam on the outskirts of Edinburgh aiming for cap number 18 in the friendly against Georgia at BT Murrayfield on Friday night.

It has been four years since Blair Cowan's last international cap, but the forward has been included in Scotland's plans.

And Gregor Townsend has backed the London Irish man and the uncapped Duhan van der Merwe to make an impact this Autumn.https://t.co/cBW2NDeeCP pic.twitter.com/CnxT56yYX5

So, what has changed things?

“I’m approaching the game from a far better place now and I realise what’s important to me: family, enjoyment and the game.

“As far as confidence goes, it’s more of a state of mind for me. Looking back to when I was originally in the squad and played at the 2015 World Cup, I was always worried about making a mistake or worried that I wasn’t doing the right thing.

“The lesson I learnt from that was how to be able to sit back and enjoy the moment and just realise how amazing it is to play for your country and how special these [top level] environments are.

“As a result, last week when I came up here to the training camp, I worked my arse off, but enjoyed it. Now I make sure I enjoy the moment: the boys, the coaches and the intensity of the environment.

“It’s always a pleasant surprise [to get the call-up from your country].

“No matter how long you play rugby for, the feeling of actually getting that phone call never changes. To be honest, I’d never shut this chapter in my career, but as you get on a bit and the team evolves you become realistic - to the point that it was a really nice surprise to be recalled.”

Cowan admits that he became “disconnected” from others and went into his shell towards the end of 2015 and 2016 and it took some time - and quite a lot of soul searching - for him to pinpoint exactly what was wrong.

“I think every player experiences it, it doesn’t matter at what level, there are those dark periods.

“I was probably too afraid to ask for help when I was not in a good focus spot. I probably dealt with a bit of depression and what I thought were the answers were the complete opposite and made things worse.

“That went on for a period, I’m not blaming anyone, it’s simply on me and how I was dealing with certain situations. I stepped back into isolation and probably seemed distant to a lot of people. You get disconnected and people probably don’t know what’s going on.

“I was lucky enough that some people recognised it, I was able to talk to the right people to guide me through it. It was nothing to do with Scotland, it was just the ups and downs and it was just my own headspace that I needed to clear.”

When Cowan last played for Scotland, Jamie Ritchie was yet to earn a cap for his country.

Now he has become a vital parts of Townsend’s game plan and Cowan feels Ritchie, the 24-year-old Edinburgh Rugby man, is just one of a number of young leaders in the playing group.

“There are a lot of youngsters who were getting their first or second cap when I was with the squad last and to come back in and see the maturity, not just on the field but off the field, is great,” Cowan stated.

“These guys have got plenty more years of international rugby ahead of them, so it gives me comfort knowing that Scotland’s core is going to be in a really great place.

“The likes of Jamie Ritchie and others have really impressed me in the way that they carry themselves for such young fellas.

“It gets me excited, coming up here and getting involved with these guys.

“You can definitely feel there’s a tight cohesion, it’s not a ‘sheltered’ cohesion, it’s open to anyone that comes in. I’m just happy to be amongst it.”

Scotland v Georgia takes place at BT Murrayfield on Friday (7.30pm) and is live on ITV4