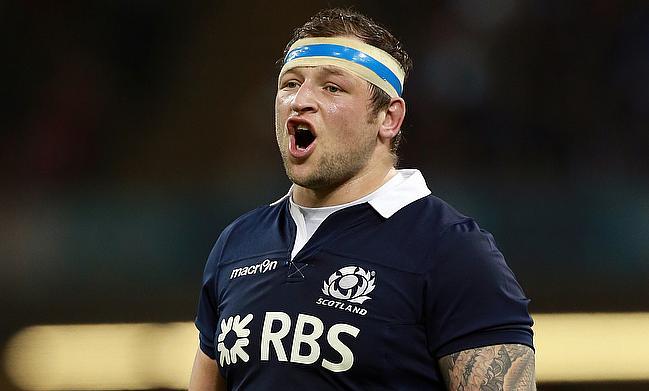 McMillan lays down the 'law' as she targets more caps for Scotland
Looseheadz x TRU Podcast: Hamish Watson discusses the 2021 Lions tour
Move south can help Jonny fulfil his ambition to roar like a Lion, says big brother Richie
Scotland and Lions legend Renwick: Hogg can sidestep his way back to top form

Getting selected for a British & Irish Lions tour is all about building up some momentum and hitting form in the 12 months leading up to the trip and former tourist Ryan Grant believes a number of Scotland’s current pack have it in them to force their way into head coach Warren Gatland’s plans for 2021.

Just over eight years ago, Grant was in South Africa with Scotland when he received the call from Gatland to tell him to pack his backs and head for Australia as soon as possible.

He replaced Wales’ injured loosehead prop Gethin Jenkins on that tour, but is one of only a few Scots to have featured under Gatland’s watchful eye that year and in New Zealand in 2017.

Grant, the former Glasgow Warriors’ man who is now 34 and retired from the game, knows that there is lots of competition for places from players from England, Ireland and Wales to contend with, but he believes some of Scotland’s forwards could edge towards a seat on the plane to South Africa next summer.

To do that, they will have to perform well for their clubs and their country over the next few months during in a packed schedule and he thinks they have it in them to do just that.

“The Scotland forwards have improved a lot over the last 12 months or so with the injection of some new faces especially with someone like Pieter de Villiers coming in as scrum coach,” Grant told TRU.

"It's nice to have your name included in the ‘maybes’, but that position is hotly contested. There are a lot of good sevens and back-rowers so we will just have to wait and see." ??

“John Dalziel has also just been installed as forwards coach and he has moved up the coaching ladder pretty quickly so he is highly thought of by head coach Gregor Townsend so hopefully he can help the pack hit even greater heights too.

“In terms of the Scottish forwards who can push for Lions selection. second-row Jonny Gray is a ‘must have’ in my opinion.

“He has a ridiculous work rate, does not miss a tackle and although he is not the flashiest of players, he puts in the work, game in and game out and deserves to be there.

“If loosehead prop Rory Sutherland can get another good five, six, seven Tests under his belt for Scotland then he can also give himself a chance.

“I think he was the best loosehead in the Six Nations before lockdown came and his name will be in the hat. When I went on the Lions tour, I only had 11 caps and Rory could be in a similar position, so I’d love to see him make it.

“Back-row Jamie Ritchie is a young player who keeps getting better and better and is becoming a real leader for Edinburgh and Scotland while he carries ball well and never takes a backward step.

“Hamish Watson [another back-row] is undoubtedly one of the best back-rowers going around at the minute while others in the Scotland pack like [hookers] Stuart McInally and Fraser Brown will also want to put themselves in the mix.”

“Coaching wasn’t something I thought I’d get into, but I have really enjoyed it”

Grant, who won 25 Scotland caps between 2012 and 2015, is still involved in rugby as he coaches at his local club Glasgow Accies.

Over the last two seasons, he has worked with the forwards at the Tennent’s National League Division Two outfit, but recently, it was announced he will be head coach when the 2020/21 campaign does eventually get the go ahead to start.

“Coaching wasn’t something I thought I’d get into, but I have really enjoyed it,” he stated after replacing Andy Jackson in the role.

“The club is just up the road from my house and I agreed to work with the forwards back in the summer of 2018 and it was good keeping my hand in and also seeing club guys just enjoying their rugby and trying to get better.

“It was my way of giving back to the game I guess and being asked to be head coach is an honour.

“I am very much on a learning curve with it all, but we have a great group of guys at the club on and off the pitch and their response to keeping fit over lockdown and now getting down to the strictly controlled sessions we can have at the moment has been top class.”

Not content with working hard on that project as well as coaching and bringing up a family, Grant is also taking part in a fundraising cycling challenge on August 21.

Couple photos from our stop in Luss @ryangrant85

Check out the link in previous tweet to donate folks ?? many thanks pic.twitter.com/PtCVAEhCQX

“I am not a regular cyclist, but it is for two great causes and it will be great to do it with my close mates,” Grant stated. Jacko has had me out on the bike doing some training and we have been steadily building up the miles, but I know I am going to be very sore after this challenge!

“We're doing this to raise money for two charities close to the team's hearts: the My Name'5 Doddie Foundation and Unite Against Cancer.

“If anyone can spare a few pounds to sponsor us, I'm sure it will make the pain and inevitable chaffing a little more bearable and would be greatly appreciated by us all.”

To find out more and support Grant and co on their charity challenge visit https://www.gofundme.com/f/cycling-the-caledonian-way