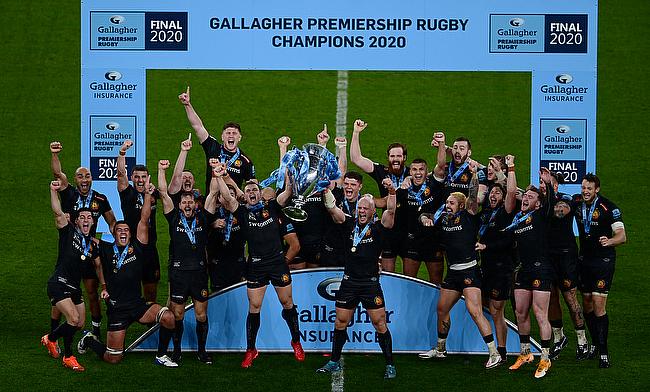 It was hardly a classic affair at Twickenham as Exeter Chiefs beat Wasps 19-13 to clinch a domestic and European double.

As the rain came down, TRU’s Joe Harvey watched on as Rob Baxter's side became English champions for the second time, three years after they beat the same opponents to lift their maiden top-flight title.

When previewing a final, you generally think about the exciting brand of rugby each side has played in order to get to this stage of the season.

More than often, the final starts slowly with the teams working one another out and keeping their cards firmly to their chests. This final was no different.

After plenty of kicking to one another, Wasps were presented with a penalty roughly 40 meters out. Only one man for the job. After slipping out of his undershirt, Jimmy Gopperth struck the opening points and essentially kick-started a final that up to that point had left much to be desired.

Wasps wanted to take control of match and Exeter wanted to claw their way back into the game and it would be the desire of the European champions that shone through.

Henry Slade did what he does best and identified that the drifting Wasps defence wouldn’t be able to catch him with his momentum going the opposite way. The England centre broke through to dot down and put the Chiefs in front.

After Joe Simmonds’ conversion, Wasps got in on the try scoring action. It was another fantastic run, this time from Jacob Umaga who skipped past the challenge of Stuart Hogg to go under the posts. Gopperth would convert and the increasingly poor weather conditions saw the game turn into a series of scrums, that would then turn into penalties and then kicks to touch.

Two Simmonds penalties would give Exeter the lead at half-time and leaving it finely posied.

It would take 19 minutes for the first points of the second half to be scored. If anything the downpour got worse over the break and it really showed in the way that each side were unable to get any sort of rhythm.

Simmonds would respond to another penalty Gopperth, with the 23-year-old’s effort seemingly sitting up in the air for an eternity before the flags were raised by the linesmen.

Each side would still bring gasps from those inside Twickenham. Slade and Umaga traded quite brilliant kicks to touch, but their teammates were unable to capitalise on the individual brilliance of their best ball players.

A tense second-half would be decided by Simmonds after Exeter had soaked up some intense pressure from Wasps.

With five minutes to go, Lee Blackett's side won a penalty deep inside the Chiefs 22 and rather than opting for a kick at goal, the Midlands club went for the lineout drive which proved costly as Jonny Gray reached highest to retain possession for Exeter.

The Chiefs then went up the other end and camped themselves in the Wasps 22 and it was only a matter of time until their opponents broke and gave away kickable opportunity. Simmonds duly nudged the ball over to spark Exeter celebrations and that feeling of despair for Wasps.

I''ll try not to mention the weather.

As much as neither side recaptured their style of play that propelled them to the Premiership final, there was still that intensity, that intent that we are all so familiar with in elite level sport.

It is difficult to say if Wasps' fairly unstructured lead-up to the game had an adverse effect on their performance, with four of their pack unavailable as a result of Covid-19. In the final five minutes, Lee Blackett's side could have and probably should have mauled over in the corner, but the team were unable to capitalise on an initial positive drive.

Exeter were by no means perfect as their infamous driving maul was unable to make a huge impact, with the Wasps pack challenging well at that facet of the game.

What Exeter were was simply relentless, uncomprimising in their waves of attack.  Henry Slade kicked to the corners well and Joe Simmonds landed any points on offer. Their ability to get proper field position was the decider and Rob Baxter admitted that his team had to dig deep to pick up their second batch of Premiership final winners medals.

Regardless of the final result, one fairytale would be ending. Wasps seemed down and out when Lee Blackett took over and their run to Twickenham was really the story of this season and in some ways, it has felt like a real turn of the page for a club that had been led by the same man in Dai Young for the best part of nine years.

As for Exeter, the pages of their book keep on being written. Ten years ago they were promoted to the Premiership and now they have two Premiership titiles and a Heineken Champions Cup in their trophy cabinet. The question is now, what is next?

I suppose we will find out soon.