Exclusive: Stephen Varney - We are dying to get a victory 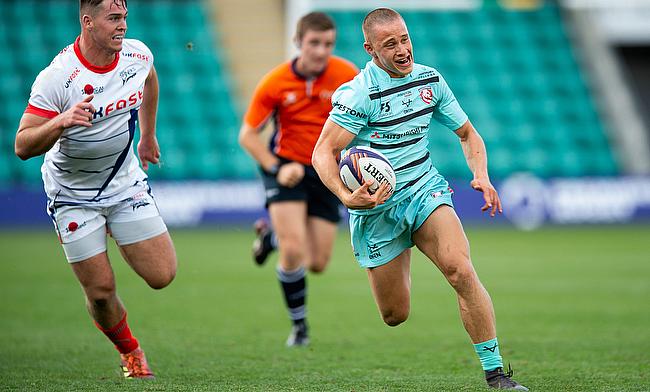 Still only 19, Stephen Varney is already establishing himself for Italy.

Qualifying for the country thanks to his Italian mother, the Welsh-born scrum-half only received a call-up to the Azzurri's U20 side in January, which make his rise all the more impressive.

For much of the 2018/19 season, Varney represented Hartpury in the Championship, but it was in the 2019/20 campaign where he really made his mark.

After a flurry of appearances for Gloucester before England went into lockdown, Varney was mightily impressive in the Cherry and White following rugby's restart.

He played in six Premiership fixtures and Varney's performances led to him being included in Italy's squad for the conclusion of the Six Nations and the Autumn Nations Cup.

However, less than a week later, Varney would receive some unexpected news.

“We had a [Covid-19] test and later that evening the doctor rang me," Varney told TRU. "I was in my room and he said; 'don’t come out, you’ve got Covid.' It was a shock because I didn’t have any symptoms or anything, so it was a shock at the time, but I am glad it is over.

“I was locked away for 10 days in my room. I tested negative two days later, which is a bit of a pain because I knew I didn’t have it at the time. They brought a Watt Bike into the room, some dumbbells and stuff, so I kept myself busy.

“It was tough mentally and then coming out, I’m not going to lie, the first session we did, I was absolutely blowing! My legs were heavy. I didn’t feel great but I have got my fitness back now and I am excited for the rest of the tournament.”

Since his return to full training, Varney has found himself involved with the matchday 23. He came off the bench in Italy’s 28-17 loss to Scotland and the young scrum-half is amongst the replacements again this weekend in Paris as he and his teammates attempt to topple a much-changed France.

For Italy, this will be their first fixture for two weeks as their clash with Fiji was cancelled after Covid-19 tests found 29 positive cases in the Fijian camp.

It means Varney and his colleagues have had time to dwell on that aforementioned Scotland defeat, but in truth, Italy were much the better side.

Matteo Minozzi scored arguably the try of the first weekend and the Azzurri performed extremely well in the scrum as they pressurised Scotland. It wasn’t until nearly 50 minutes in that Gregor Townsend’s side put the hammer down to run away with the fixture.

Varney even had to watch on as his clubmate Jake Polledri was stretchered off the field following a serious injury.

One of several young Gloucester players to be representing their respective nations this autumn, Varney believes that the new coaching staff at Kingsholm have helped massively with his international achievements so far.

It was the perfect start for George Skivington and @gloucesterrugby at the weekend and young scrum-half Stephen Varney was amongst the tries for the Cherry and Whites.

We chatted to him back in April about his development and the benefits of #UniRugby https://t.co/wVaufaI51x pic.twitter.com/rLJRqU86Rm

“Since the new coaching team have come into Gloucester, I’ve had a lot of opportunities which I am really thankful for and a lot of guys there are getting opportunities,” Varney said.

“Jack Clement (who took part in an England camp), Louis Rees-Zammit (Wales), all of us have been getting opportunities and it is a really good environment at Gloucester at the moment and then the call came along to go to a camp for Italy for the last two Six Nations games and I couldn’t really say no.

“It was a great opportunity for me. I feel like it is going to develop my game and improve my game in the Premiership with Gloucester, so I feel like I am in a good place and I am excited for the last two games and going back to Gloucester also.”

France have made 14 changes for Saturday's meeting with Italy. Baptiste Serin will captain the side and the scrum-half, along with Matthieu Jalibert, are the only two survivors in the starting XV from Les Bleus' victory over Scotland last weekend.

As for Varney, he is hoping to offer an impact off the bench - starting behind Marcello Violi for a second consecutive international fixture - as Italy aim to win their first game since the World Cup last year.

“As a team, we’re trying to put a performance out each week and we are dying to get a victory," Varney said. "We are working so hard for it. I feel like eventually it will come and it is going to be a tough challenge this weekend, but I have a lot of faith in the boys to do it.