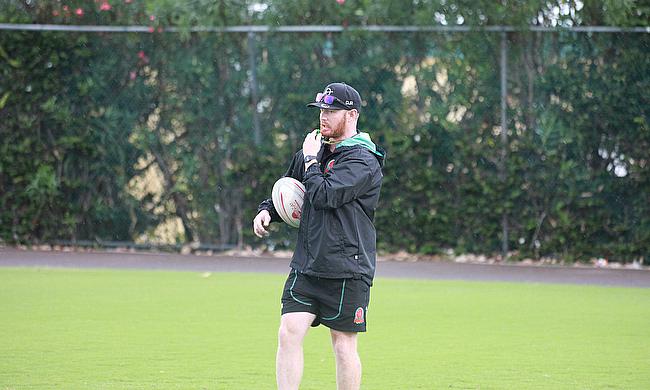 Like for the players, the opportunity of going to Bermuda for the World Tens Series was too good to turn down for the coaches.

For David Ross, his 2019/20 season came to a crashing halt at the start of March, less than a year into his backs role at Nottingham. He had arrived at Lady Bay after some time spent in New Zealand and combined his new job in the Championship with the Head of Rugby position at Nottingham Trent University.

As a result of the league’s cancellation, Nottingham would finish sixth in the Championship. Whilst head coach Neil Fowkes was balancing his time in the East Midlands with the scrum coaching role at Wasps, his colleague Ross jumped at the opportunity to do some hands-on coaching in the World Tens.

“More than anything else, being a rugby coach, I just wanted to be coaching again,” Ross said. “We were just kind of doing the staged return to play protocols that the RFU have in place and I think the opportunity to come out here and be involved at a professional level and get some real competitive rugby was too good to turn down.

“It is a really exciting, new format that the World Tens are trying to put in place. There is a couple of new law variations and I think as well, there is a very, very high level of player here. We have got some of, if not the best sevens players to ever play the game.

“To be able to go up against those guys and getting the honour to coach someone like a DTH van der Merwe who has played at four World Cups for Canada and is a Glasgow Warriors legend is amazing. I am a Warriors fan. The opportunity, just on all levels, was too good to turn down.”

Miami kicked off the entire tournament against the star-studded London Royals on October 25th. It was a fairly humbling encounter to start their World Tens journey, falling 23-6 to their opposition, but they returned strongly to beat Phoenix 32-0.

After two weeks of fixtures, Ross’ team finished fifth overall and this was no mean feat: “More than anything else, the challenge of our team is we literally have players from all across the world,” Ross explained. “It is not like the Royals for who the majority are based in England or the SX10 team that are all based in Africa. Our challenge is actually more of a team cohesion challenge and is one where we have probably focused more on that and the rugby has taken care of itself as a result.

“It has just been awesome and I think that it has challenged me in several different ways as a new format. I have done quite a lot of sevens coaching, 15’s as well, but 10’s isn’t actually something that people have a lot of experience in because it is not readily played across the world.

“There is a couple of big tournaments here and there, Hong Kong being one, but it is a new format so that brings different challenges from a tactical point of view. We have had some big wins and some really great performances where we narrowly lost out. The adrenaline sure gets going again and you find yourself suddenly getting a bit more vocal on the side of the field.

“It has been really great fun as well because you get hooked into the process when you are in that professional environment day in, day out and not having had it for seven months, it has been good to get back into it.”

With the London Royals having won the World Tens Series league competition last weekend, this week the seven teams will be playing in the Cup competition. This will be a straight knockout and Miami have drawn the highly physical Ohio Aviators.

Keen to join us on Sat? Here’s how the final #WorldTensSeries knockout round looks as our magnificent seven teams hunt down the Cup.

Join us then. We’re off for a beer. ?? pic.twitter.com/MLsaG1cmJQ

Thanks to winning the league, the Royals have moved directly to the semi-final stage of that competition, where they will face the winner of the Sun's game. On their opponents in the quarter-finals, Ross says that the clash against Ohio has already become something of a grudge match between the two US-based sides, the fixture even seeing the very first penalty shootout between the teams on Tuesday.

“We have beaten them in the two games we have played with them thus far,” Ross said. “There is a real edge to our games because we have got several North American players and they are all North American. There is a lot of friendships and a lot of rivalries between the guys.

“We play a totally different style of rugby to them, which is interesting. I think a lot of people will be cheering us on because 10’s is very much about using space and using the ball and attacking where there are no defenders whereas they are a very 15’s based team, a lot of mauls, scrums and a contact focus.

“So, it is a real clash of styles, so that as a first game of the tournament of the next round is going to be awesome.”

After this weekend, those that have made their way to the North Atlantic will have to focus their thoughts to returning home. For the players who will be heading back to England and other parts of the UK, they will be walking into a national lockdown which is a far different reality to the one they are currently living.

Yesterday, the RFU belayed the fears of those involved with Championship rugby, stating that they still had every intention of seeing the second division in action, with January 2021 the proposed start date for the competition.

It has been a challenging 12 months for the Championship as a whole, with the most notable point being the significant cuts in funding made by the RFU. This, as a result, has seen Ross’ Nottingham adopt a semi-professional model but regardless of this fact, he is still confident that the team can perform above the level that many feel they are capable of.

Having also recruited players transitioning away from the game at a full-time level, there is even a chance that this could be one of the strongest Nottingham sides in several years.

The Miami Sun are off to a great start after defeating tournament favourites the London Royals in a dramatic @WorldTens matchup from Bermuda ?? pic.twitter.com/SfXg9Aoo0p

“We have assembled a squad that we are looking forward to working with this year,” Ross said. “It is potentially a stronger squad than we have had in the previous couple of years. Some of those guys haven’t touched a rugby ball for seven months now, so there is a long process to get fit and healthy, but something we are really looking forward to.

“Nottingham is a team and I have only been there a season. Nottingham is a club that has always punched above its weight historically so it is just another challenge for us that we’re really looking to embrace and I think because we are used to punching above our weight, it is just something that we will take in our stride.”