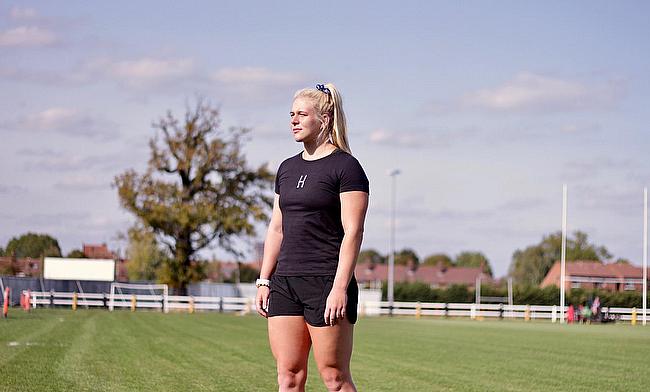 Abi Burton, who has recently signed for Wasps, is also an ambassador for the mental health foundation, Looseheadz
©Looseheadz / Perception Agency

TRU x Looseheadz Podcast: Callum Sheedy
Exclusive: Alex Davis on the England Sevens start-up
Exclusive: Sydney Gregson on why her goals haven’t changed
Exclusive: Richard de Carpentier - It feels like the only people not supporting us are the RFU

Over the last few weeks, Abi Burton has been quick to show her support. The 20-year-old has taken to Twitter to post messages of congratulations to some of her England Sevens colleagues who have managed to secure contracts in the Premier 15s and the Gallagher Premiership.

But whilst Burton’s positivity is necessary, it is the product of a difficult situation.

This summer was supposed to be a dream come true for Burton. She should have recently returned home from Japan having represented Team GB at the Tokyo Olympics following her second season on the World Series.

However, all of that changed due to the impact of Covid-19 and whilst the rescheduled Olympics is set to take place next summer, the pandemic has hit Burton and her team-mates severely.

Last month, England’s men and women’s rugby Sevens players were made redundant by the RFU and the decision to cut the programme meant their only source of funding was taken away from them. Since then, some of the biggest stars in the sport have been searching for alternative employment in order to keep their Olympic hopes alive.

“It has been a tough time as to be expected, but we are now coming out the other side,” Burton, who has recently signed a 15s contract with Wasps, tells TRU. “A lot of us had our lives planned, especially me as I had two more years left of my contract and I moved my entire life down to London after being up north. It has been tough, but you have seen how resilient it has made us all.

“You would expect this situation to break us, but we have stayed resilient and we are not afraid to talk about it. We are not afraid to say how much of an impact this has had on our lives financially, socially and within our dreams of going to the Olympics.

“Seeing guys like Norts [Dan Norton] scoring for London Irish, Will Muir going to Bath, the girls getting their contracts, you have to support everyone’s choices. We all have to live and as players, we have to keep playing which will help our Olympic preparations.

“Yes, it has been difficult, but it shows the people that we are. We are not going to go down without a fight. We want to give ourselves the best opportunity to win a gold at the Olympics.”

Burton’s England Sevens colleague, Alex Davis, told TRU last week the players haven’t been given any ‘clarity’ on what the future holds for the programme or when they might be able to pull on the England jersey again.

With this in mind, the players have decided to take matters into their own hands by launching a crowdfunding initiative to help their preparations towards Tokyo 2021.

Burton says the early response has been extremely positive, having already raised a combined total of just under £15,000. Whilst England Sevens are continuing to look for funding from elsewhere, the players are also seeking investment from sponsors and high net worth individuals.

“We couldn’t just sit back and the crowdfunding pages are an idea which we all had,” Burton adds. “The RFU have said they will support us, but they don’t have the financial support for us at the moment. We understand the world is in a difficult place, but we just have to be proactive.

“Throughout the last couple of weeks, the boys have been amazing. They know so many people. The aim is to speak to different investors and try and talk to them to see how we can potentially fund our programme.

“It has meant us girls have had to step up because we don’t know as many people as the men. Not a lot of us have been in the professional environment as long as them. If there is something that they find and one of us fits better to it, we all talk through it on our big group chat about what we can potentially do to help us raise money.

“Everyone picks up what needs to be done and we are massively supportive of each other and that’s the kind of England family I am part of.”

And whilst the ‘England Sevens family’ are working together to try and achieve their Olympic dreams, Burton is conscious of the bigger picture as the players aim to also protect the future of the sport.

“I want us to create a sustainable programme so that it goes on for years and years. I want to be in a position where if I have kids and if they want to play rugby, there is that pathway through.

“Fair enough, we are doing what we are doing now because we want to get to the Olympics, but after that, we want to dictate the next generation’s future as well. If we do have another global pandemic, we want to be in a position where Sevens as a sport doesn’t suffer.”

Having progressed through the performance pathway before earning a professional Sevens contract at the start of 2018-19, Burton knows how beneficial the programme has been to her on a personal level.

In an interview last year with NewsChain, Burton revealed how rugby gave her confidence not only in her abilities as an athlete, but it also shifted her mindset around body perception.

Before rugby, Burton took part in athletics and swimming, but she admitted the derogatory comments she received regarding her body image affected her performance levels.

The discussion around perceptions of women in sport has come to the fore in recent weeks after Canterbury, Ireland Rugby’s official kit sponsor, used female models rather than members of the national side to launch their new jersey.

This sparked the #IMENOUGH campaign, led by Wasps star Flo Williams, and Burton, who also set-up her own Instagram page - @abs.olutleypositive - last year to try and influence a social change, hopes initiatives such as this can help female athletes become more recognisable as role models in rugby and across sport.

“It is something I am very passionate about,” Burton says. “The reason why I created my page was because of these derogatory comments made by people who don’t really understand what it is like to be a woman within a masculine dominated sport.

“I had it all growing up; ‘She’s more muscular than all the boys. She looks like a man.’ All of that I have gone through.

“The #IMENOUGH campaign has been what I have been waiting for. When all of this came out, I messaged Flo and I was like ‘thank you so much for speaking out about this stuff.’ We now have an opportunity to keep this going and it is making a difference already.

“In rugby and male dominated sports, we want to be role models and we want girls, when they grow up, to feel comfortable in saying they want to be a female rugby or football player.

“When I came to the Sevens programme, my two role models who I looked up to were Alex Mathews and Amy-Wilson Hardy and it is amazing to now run out onto the same pitch with them.

“With Scaz [Emily Scarratt], Mo [Natasha Hunt], Hannah Botterman and all the girls in the Sevens set-up as well, those faces, our faces, are what the next generation sees. We need to showcase our women. We want to change the views for the next generation.”

“The rapid growth of women’s sport across the globe has shown a vast increase of interest and investment from governing bodies. Despite this growth, we are still fighting to be recognised as role models on a commercial platform. The media continues to shed light on how far we have to go in order to be accepted in a male dominated sport. It’s time to change the stereotypes around what is ‘masculine’, ‘feminine’, ‘muscular’ and ‘rugged’. The ‘Enough’ campaign is our way of showing we have had ENOUGH of derogatory comments about the way we look. We play rugby because we love it and our bodies are a reflection of relentless hard work and dedication.” - @abi_burton talking about why the #ENOUGH campaign means so much to her and other sportswomen. Head over to LooseHeadz.co.uk now to get your #ENOUGH T-shirt and show your support ??

Whilst Burton knows more still needs to be done in order to break down the stereotypes surrounding the female game, the 20-year-old has also been tackling the stigma when it comes to mental health after becoming an ambassador for the foundation, Looseheadz.

Looseheadz also recently launched a collection of statement t-shirts and by working together with Flo Williams and the Perception Agency, their aim is to promote gender equality in sport through their #ENOUGH initiative.

“The work which Looseheadz do is amazing,” Burton said. “That’s why I wanted to be a part of it. The work that they do behind the scenes to be able to promote the awareness around mental health, I applaud everyone who is involved with them. I don’t think they understand the impact they have.

“I think because we are professional athletes, we get put on a pedestal a lot that we don’t have the same issues as people in ‘normal society’ but sometimes it can be worse, especially in rugby. By us sharing our struggles, it helps because it can promote people to talk and that is massive.

“As soon as their #ENOUGH campaign came about as well, I didn’t even bat an eyelid. They are massively supportive of us whether that is me, Sydney [Gregson], Eloise [Hayward] or all the other female players they have on board as their ambassadors.

“That’s what we need in this time as well especially with all the England Sevens stuff that is going on. You need someone to back your corner a little bit and that is exactly what Looseheadz have done and I am proud to be associated with them.”