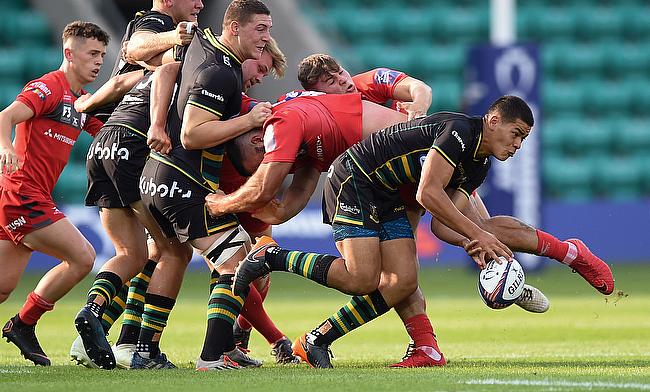 Having been born in Rotorua, Connor Tupai is as ‘Northampton’ as they come.

Following in the footsteps of his father, Paul, in pulling on the Green, Gold and Black jersey, Tupai Jnr originally attended the Northampton School for Boys before taking his steps into the Saints senior academy.

In the 2018/19 campaign, he made one appearance in the Premiership Rugby Cup but there are now special moments from last season which the scrum-half can cherish.

In October, Tupai made his Gallagher Premiership debut against Worcester Warriors before collecting two further top-flight appearances for the club. He also faced Leinster in back-to-back fixtures in the European Champions Cup.

Every minute which Tupai has soaked up for Northampton is, in many ways, the culmination of a life’s ambition to play for the Saints. Not only did he watch his father represent the club on 73 occasions, but he was also an avid viewer of Dylan Hartley's performances.

Paul Tupai took the fellow Rotorua native under his wing when they both joined Northampton and Hartley would babysit Connor and his sister, Leah.

As a result, Tupai Jnr now refers to the former England captain as his big brother: “He babysat me when I was little. My Dad kind of babysat him when he first came over and now, me and my girlfriend, we babysit his kids. I’ve got a bedroom in his house and all that and he looks after me.

Paul Tupai retired from playing in 2018 whilst with Bedford in the Championship which brought his 28-year career to a close. Over 12 months later, Connor would watch on as his 'big brother', Dylan, hung up his boots because of injury.

With Northampton having had such an impact on his life, Tupai says that playing for the team is the fulfilment of a dream that he first had when he was six.

“It was something that I dreamed of and saw in my future at a very young age,” he said. “I remember watching my Dad play when I was about six through a glass window in the family box. Ever since then, I always saw myself playing for Saints, so when I first did, it was a big thing for me and my family.

“I have grown up with Dylan Hartley by my side, so watching him all my life in the Saints colours was also a big thing for me and something I wanted to do with him. I didn’t get to do that, but having him at the club when I was playing (for the academy) was a big help for me as well and it is massive for my family.”

After making four appearances for Saints prior to December last year, Tupai was parachuted in to play in Northampton’s Champions Cup pool games. With the half-back division decimated by injury, he came off the bench in the first clash with Leinster just a day shy of turning 20.

One week later, he was named in the starting XV at the Aviva Stadium in Dublin. It would be just his second ever start for the club and a first in European competition.

“The few times I was named in the team, I had no idea about it,” Tupai said. “I found out in a meeting. Like most other people on a Monday morning or Monday afternoon, your name gets put up on the whiteboard and that’s about it really. It is a bit of a shock, but 20 minutes later, you are on the training field.

“If I was in the team, great, and I tried to learn and nail my role as much as possible. If I wasn’t, nothing changed, I prepped the team as best as I could, kept my head down and trained as hard as I could and that was it really.”

When challenged with playing against multiple European champions, Leinster, it would have been fair to assume that the 20-year-old would have been nervous at the prospect of taking on Garry Ringrose, Robbie Henshaw et al.

“I try to enjoy it,” Tupai added. “When I go out in the warm-up, I sort of have a look around, take in the atmosphere and just try to take as much pressure off myself as I can. I’m not really an overthinker. I felt no pressure when I was playing in those big games.

“When I played against Leinster, I was almost the least nervous I have ever been, in a weird way. I felt like throughout the whole week, everyone took the pressure off me, all the coaches told me to just go and enjoy it.

“I have been more nervous for school games than I was for that game and that was the biggest game of my life. I just like to enjoy things and take them as they come.”

Suffering a wrist injury that kept him out of the Premiership’s restart in the summer, Tupai is now ready to kick-on for the 2020/21 season and Northampton begin with a trip to Sale.

Back at it again.

Your Saints for our @premrugby opener under the lights in Sale ? pic.twitter.com/mVCPMBxuYm

Saints enjoyed a strong start to the 2019/20 season before a poor run of form from January saw the club fall out of top four contention.

With a brief pre-season ahead of the new campaign, Tupai says that the players have been working hard on their team cohesion.

“As a playing group, we felt that we were lacking a bit of team cohesion,” he said. “Because of Covid, it is quite hard to get together on social kind of events, but we have really been working on being a tightknit group since we have come back.

“The boys are all bonding together where we can, young lads included, and we just want to go back to basics, start our season how we did last year and just build momentum.

“We lost all of our momentum and it was a downward spiral from there, so I think we know how important momentum is. Other than that, we haven’t really changed much, we are just going to try and do our basics well and go for it.”