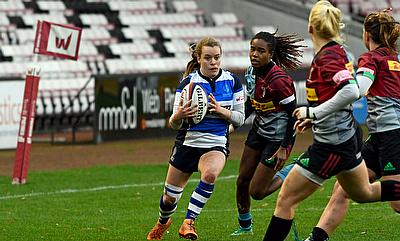 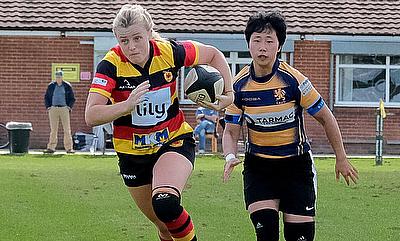 Coaches who have worked closely with Scotland newcomers Evie Tonkin and Alex Wallace believe there are a number of players coming through the ranks in the English lower leagues who are capable of following their lead and go on an achieve great things in the game.

Full-back/winger Tonkin, 22, is now in her second season in the Tyrrells Premier 15s with Darlington Mowden Park Sharks, but made her way in the game via Keswick, Leeds Beckett University and Harrogate.

And centre Wallace, 23, is loving life at Championship North One outfit Harrogate Ladies since she moved there in the summer of 2018 having previously also played rugby league for Castleford Tigers.

Both qualify to play for Scotland through family connections and Tonkin already has a Sevens cap under her belt.

With Scotland facing a big year leading up to the XV-a-side World Cup qualifiers, their head coach Philip Doyle has cast his net wide in a bid to get the right mix in his squad that could have a chance of making it to the showpiece event in New Zealand in 2021.

As a result, Tonkin, Wallace and fellow uncapped player Evie Gallagher have been included in the squad for the Autumn Tests which start this Sunday against Wales and conclude seven days later against Japan.

Also in there is teenager Sarah Denholm, who was an unused replacement in the second Test win in South Africa last month, and while she and Gallagher came through Biggar and Stirling County respectively Tonkin and Wallace have played all of their rugby down south.

And Justin Loveridge, the head of programme and co-head coach at DMP Sharks, and Harrogate Ladies head coach John Hardy, feel there are other players who are playing or have played in the English leagues below the Premier 15s who can soon go on and play in that league and perhaps even for their country.

“Without a doubt there are players out there in the lower leagues who can make a difference in the Premiership and can maybe even go higher and play for the likes of England, Scotland and Wales,” Loveridge told TRU.

“Look at Evie, came to us last year having played well in the lower leagues and at county level for Yorkshire.

“Last year she played for our development team and then in the Premiership and she has started to thrive at this level now.

“This year Lois Brown and Amy Orrow came to us from West Park Leeds and Kendal in the lower leagues and they have been doing a great job in the back-row. They have brought something extra to us.

“I think there are other players out there who could cut it in the Premiership. I think as the women’s game continues to get bigger and better we will see more and more players coming up through the levels and it’s exciting.”

And Hardy added: “We would never stand in the way of a player wanting to test and better themselves in the Premiership and from what I have seen in our league this season there are a few players more than capable of making that step-up.

“The drive and determination that some of the players have is unbelievable and if anyone does make the step into a higher league then they always go with my best wishes, like with Evie when she went to the Sharks.”

Scotland main man Doyle names his 23 player squad to take on Wales on Friday afternoon, so what kind of player would fans at Scotstoun and on BBC ALBA see if Tonkin was selected for Sunday’s clash?

“Evie has great footwork while her running lines off 13 in attack really cause teams problems and she makes good yards,” Loveridge stated.

“She got a Scotland Sevens cap in the summer which was great and then she wasn’t in our matchday squad for the opening few league matches of 2019/20, but she has battled her way back in and she has made the number 15 jersey her own at the minute.

Congratulations to the 5?? Sharks named in Scotland’s squad for their Autumn Tests! #MowdenFamily #AsOne https://t.co/3JwTIca7su

“Like all of the players that we have brought in during recent times what I like about Evie is that she is not afraid to keep learning while she also buys into the positive group dynamic we have here at the club.

“In the group we have Heather Kerr and Tamara Taylor who have been there and done it with England, some Scotland girls, some Spanish girls and some England age-grade caps and they mix really well.

Hardy added: “Evie played for Harrogate previously and she is fast and has good feet. I know the sacrifices she has put in to get to this point so I hope she gets a cap.”

“Alex knows how to spot a gap”

Wallace has been one of Harrogate’s star performers since she joined a club that was moving up though the leagues.

“This is Alex’s second season with us, she was a dual code player growing up so she has played rugby league for Castleford Tigers too,” Hardy said.

“Since she arrived last season she has come on leaps and bounds and she has been playing outside centre for us.

“We are very proud of her for making the Scotland squad and for the hard work that she has put in, it is great to see that hard work does pay off.

“It is a great club environment here and I think Alex enjoys that.

“We have 98 registered players this season which is huge for us and we try and create a good environment for females to come and play in whether they are beginners, want to play socially or want to push on like Alex has.”