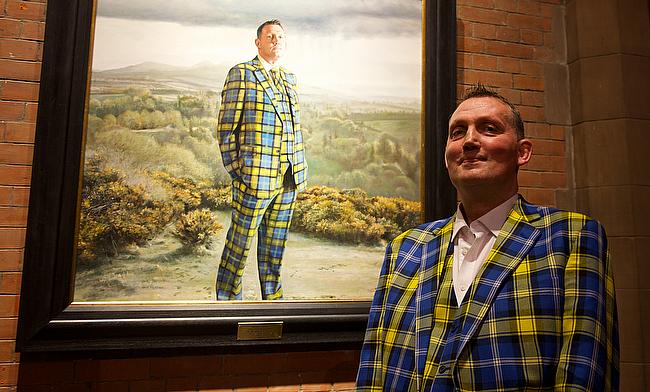 'What might have been': Moore looks back to the day Scotland scared the All Blacks
Young Edinburgh-based rugby duo to take on 24-hour charity challenge
‘Playing in a World Cup in New Zealand would be a very special moment’
‘Afterwards it felt like I had played in a World Series sevens event!’

Every rugby supporter, as well as many sports fans from across the world, will be raising a glass to mark Doddie Weir’s 50th birthday on Saturday.

Through earning 61 caps for Scotland between 1990 and 2000, touring with the British & Irish Lions and providing energetic punditry and after dinner speaking wearing his trademark tartan suits, Weir was already well known by the rugby fraternity prior to 2016.

However, since then - when he was diagnosed with motor neurone disease and made it public in 2017 - his smiling face has become even more familiar because of the tireless work he has put in to raise awareness and vital funds for MND.

He, and the dedicated team behind him, have left no stone unturned in their research and the way Weir and fellow sportsmen with MND like Rob Burrow and Stephen Darby have used their platforms to raise awareness, has been inspiring.

thank you very much. leave a bottle at the door https://t.co/G9tevQ0qfT

Saturday, July 4 sees former second-row Weir turn 50 and as well as spending a quiet day at his base in the Scottish Borders with wife Kathy and sons Hamish, Angus and Ben, ‘the big man’ will no doubt be inundated with phone calls and messages from friends and old rugby pals.

Three men who will certainly be in touch with Weir will be his ex-Scotland teammates Gary Armstrong, Bryan Redpath and Craig Chalmers.

“Doddie is such a brilliant guy, he is always the life and soul of the party and we have been great mates for many years,” Gary Armstrong, the former Scotland and Lions scrum-half, told TRU.

“I was in the Scotland set-up for a couple of years before Doddie came into things, but I knew him well from the Borders where we had played against each other for Jed-Forest and Melrose.

“Some folk would be nervous coming into a dressing room that had just won a Grand Slam, but not Doddie!

“Straight way he was the big, daft laddie in that group, but Doddie isn’t as daft as he makes out and he was an excellent rugby player.

“He became my best mate when we both joined Newcastle Falcons in 1995 and that was such an exciting time for us both because we were stepping into an environment where there were top class players from all around us in the squad.

“It was kind of sink or swim for us, but we spurred each other on and we fitted in really well down there and loved the attitude within the group. We started winning trophies and it was just a brilliant time.

“He could be lazy at times, but he is a competitive bugger like me and we just really hit it off and spent a lot of time together. Whenever we needed a laugh in the dressing room Doddie was the ‘go to’ man and they were special, special times.”

Armstrong, now 53 who earned 51 Scottish caps, admits that the spirit Weir has shown since his MND diagnosis has been “unbelievable”.

“When I got the phone call a few years ago to tell me about it I was in shock and didn’t know too much about MND to be honest, but his spirit soon snapped me out of moping around and I have tried to help out with fundraising ever since,” Armstrong states.

“I have never met a more determined man in my life than big Doddie that is for sure. He is an inspiration to me and many others around the world and I hope he has a great birthday with the family.”

“He was pretty slim and wiry, but he certainly wasn’t bullied out there on the pitch”

Bryan Redpath played in the same Melrose team as Weir and the scrum-half played 60 times for Scotland between 1993 and 2003.

He turned 49 himself on Thursday of this week and, ahead of Weir’s 50th, said: “Doddie and myself were coming through into the senior ranks at Melrose at around the same time and from a young age, he was a physical player who could hold his own.

“When you think at the time he was playing second-row/back-row as an 18-year-old and was up against some big old units in the packs of our Border rivals, he could have crumbled, but although he was pretty slim and wiry, he certainly wasn’t bullied out there on the pitch.

“Between 1989 and 1995 we had won a number of top flight titles with Melrose and it was just a great club and a great bunch of boys.

Joining us on the podcast this week is @DoddieWeir5 ??

“We then all went our own ways into the pro game, but I remember the times at The Greenyards with much fondness and when we had some down time off the pitch, Doddie was always one of the ones mucking about and making everyone smile.

“Everyone knows the reputation our coach at the time Jim Telfer had for hard work and being serious and he never quite knew how to take Doddie and his joking about, but Jim brought the best out of the big man and they shared many a good day together at all sorts of levels.”

Even though Redpath and Armstrong were competing for the same Scotland number nine jersey, when they were away with the national team, they were known as ‘The Three Amigos’ alongside Weir.

The man who has gone on to have a stellar coaching career recounts: “We all took our rugby seriously as soon as the first whistle went, but we could all be known to joke about a bit and try and make each other laugh, even when the national anthems were being played!

“Doddie was at the heart of a lot of that and he was such a well loved and respected figure in our Scotland dressing room. What he has done for MND awareness in recent years has been very special too, a top, top man.”

“Doddie was winding me up in his usual jovial fashion!”

Craig Chalmers, the Scotland and Lions stand-off, played with Weir for Melrose and for Scotland over many years, but one of his most vivid memories of being on a rugby field with him came when they played against each other.

“I was playing for Harlequins and Doddie was captain of Newcastle in a European Shield semi-final at Headingly in Leeds in April 2001,” Chalmers said.

“As I ran out for my warm-up Doddie and Gary [Armstrong] were already winding me up in their usual jovial fashion and the first half was pretty poor, but we managed to get a win in the end - we came through 17-12 and I scored all of our points - so I had the last laugh on the two of them.

“In typical Doddie fashion though, he was straight over to me after the game to congratulate me and shake my hand while Gary still gave me a lift up to the Borders later that night and we were all, and still are, great friends.”

Chalmers, who appeared for Scotland 61 times between 1989 and 1999, also remembers when Weir’s tartan suit ‘craze’ began.

“All of the Scotland boys were specially made tartan suits at one stage - I think I still have mine in the back of the cupboard somewhere and I don’t think they really suited many of us, but Doddie’s suited him and things seemed to go from there,” Chalmers recalls.

“Back in those days, the suits weren’t fitted and I think we looked pretty ridiculous, but Doddie was always different from the crowd and for some reason he was able to pull it off!

“He has made the tartan suit his own and he has worn them with distinction for many years now.

“In his life Doddie has taken on everything head on and with a smile. He also had a steely determination from his early playing days which maybe not everyone saw, but that steeliness has certainly been evident in spades since he was diagnosed with MND and I am in awe of the courage he continues to show.”

Find out more about the My Name’5 Doddie Foundation via myname5doddie.co.uk and get involved in the virtual cycling fund raiser being held on July 4 via doddie5-ride.co.uk