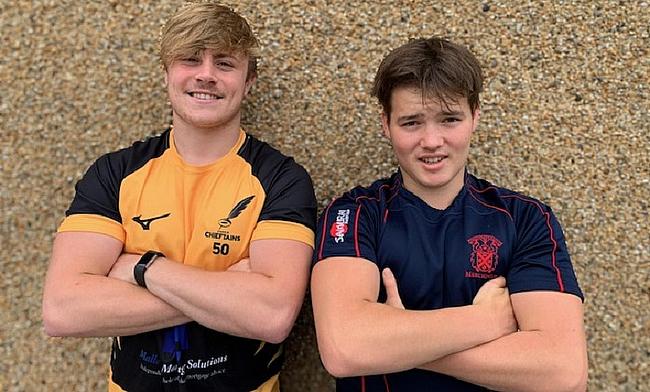 Howat not feeling sheepish as she prepares to test herself in the top-flight
‘Afterwards it felt like I had played in a World Series sevens event!’
Bundy took on Bresler and now he is ready for French challenge
‘This is your Everest boys’: Duo taking on mental health charity challenge

Their 24-hour fitness challenge does not take place until later this month, but already young Scottish rugby players Charlie Brett and Toby Gray have raised over 200 per cent of the charity fundraising target they have set themselves.

After the weekend just gone, the duo had already raised £4,030 after setting an initial goal of £2,000 thanks to the generosity of family, friends and the wider rugby community north of the border.

Of course, they want to raise even more in the next few days before the challenge gets underway and the neighbours from the Colinton area of Edinburgh have been putting in the hard yards to make sure they are well and truly ready for their mammoth task.

“During the early part of the lockdown period we were keeping in touch via WhatsApp and we were keen to keep ourselves as fit as we could and not let our fitness levels drop with a break from rugby coming in,” Brett, the 21-year-old who plays for Currie Chieftains in the Tennent’s Premiership, told TRU when asked how the challenge came about.

“We saw that Southern Knights’ Super6 captain Craig Jackson had taken on this type of challenge for 12 hours and I thought it would be good to replicate it. Toby agreed, but being younger and perhaps more of a risk taker than me, he said ‘why don’t we do it for 24 hours?’

“After some thought I said ‘let’s do it’ and over the last month or so we have been training hard and since Scotland entered phase 1 [on May 29, easing restrictions slightly] we have been able to train more together in the garden.”

Chieftains Charlie has smashed his target fundraiser amount already before the event has even taken place!

Can you support him even more...?

Brett and Gray, who is now 17 and is at school at Merchiston Castle School where he plays his rugby, have been neighbours for many years and their parents are good friends.

On cranking the challenge - which will take place in his front garden, Gray states: “I wanted to really make the challenge something we really had to focus on and work hard towards because we are raising money for a great charity.

“We started our training by going for 4 or 5km runs around the block and over the last couple of weeks we have had the treadmill, the static bike and the rowing machine all in position and that has allowed us to test out the logistics of the challenge and how each hour will pan out.

“Recently we have done ‘test’ runs going through sections of the challenge, but we know that 24 hours will really push us, especially when we are doing it through the night.

“No matter how hard the challenge becomes both mentally and physically it will be nothing compared to what those who are dealing with cancer are going through.”

Brett, who has previously played Touch for Scotland, adds: “It is great to be able to do the challenge together because we will be able to push each other on when times get tough during the period while our respective parents have been a great support to us both and will be again when it is ongoing because refuelling is going to be very important.”

On the day the boys’ sisters will be helping out with a bake sale with any money raised going to NHS Charities Together.

“Rugby is a real passion for us both”

Brett played a number of games for the Currie Chieftains first XV - who were about to go into the end of season title play-offs back in March before 2019/20 was declared null and void - at full-back and was enjoying being part of a young, exciting squad at Malleny Park.

“Currie is a great club and over the last year there has been a really good atmosphere among the boys,” the former George Watson’s College pupil explains.

“Coaches like Mark Cairns and Ally Donaldson have been great to work with while our senior players like Fergus Scott give strong leadership and they encourage the young guys to play an attacking style of rugby which is really fun to be a part of.

“We were feeling good heading into the play-offs, but we will just have to regroup ahead of the next campaign.”

Currie head coach Mark Cairns said of Brett: “Charlie is a top guy which was probably best shown by how he remained a big part of our squad in 2019/20 after sustaining a season ending injury against Jed-Forest in November. Prior to that he was having a fantastic season.”

On the 27th/28th of June, myself and @charlie_brett10 will be taking on a 24 hour challenge to raise money for cancer research which is a charity that is currently close to us. The link to donating is in my bio. Any support and donations is very much appreciated. #cancerresearchuk #challengeaccepted #ggtth

In terms of his rugby, Gray, who turned out for Watsonians Warriors as a youngster, plays as a hooker for Merchiston and still has the end of this term and then one full year of school left to go in 2020/21.

“There is a great rugby programme in place at Merchiston led by head of rugby Roddy Deans and as well as working together as a squad at training, we also get the chance to work on our individual skills a lot,” the teenager who has represented the first and second XVs said.

“And to see the likes of Jamie Dobie [now with Glasgow Warriors], Dan Gamble [now with Edinburgh Rugby on an Academy contract which will become a professional one] and others who have played for Scotland under-20 head out from the school in the last wee while and do so well, spurs myself and my teammates on to push on ourselves when rugby returns.”

Merchiston head of rugby Roddy Deans said: “I am really impressed by Toby and the challenge he is undertaking. It is good that he has something to focus on and keep him focused while rugby is on hold.

“He is a hardworking rugby player who gives his all to training sessions and matches. In the year just ending he got a taste of first XV rugby and he will be looking to push on and be a key part of that squad next year.”

To get involved with the boys’ fundraising efforts visit https://www.justgiving.com/fundraising/tobyandcharlie24hrchallenge