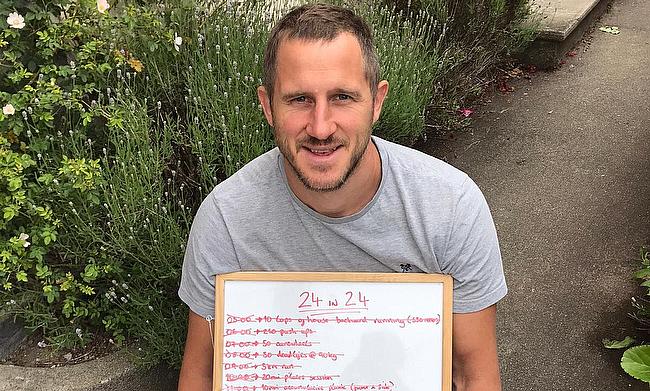 ‘This is your Everest boys’: Duo taking on mental health charity challenge
Sydney Gregson: Hopefully we can help as much as we can
McMichael ready to roar when rugby returns
John Dalziel keen to see Kyle Steyn shine with Scotland Sevens

During his playing days, Mark Robertson was always someone who liked to push himself - and that trend has continued into his coaching life and led to a recent charity challenge.

Robertson, who played XVs for Melrose, the Border Reivers, Edinburgh Rugby and London Scottish, is perhaps better known for his exploits on the sevens field.

He represented Scotland on the World Series for many years in over 50 tournaments and was part of the Great Britain squad that won a silver medal at the Rio Olympics back in 2016.

For the last year or so Robertson, who retired from playing in 2017, has been living in the Auvergne-Rhône-Alpes region of France with his family having landed a coaching role with Top14 club Clermont Auvegne.

Of late, like most people throughout the world, the family endured a spell of lockdown due to the Covid-19 pandemic and Robertson wanted something to focus on to keep his fitness up.

Unbelievable journey with this group of mates. A privilege to represent team GB and get the chance to showcase 7s to the world. Overwhelmed by the number of messages I've received over the past few days. Thanks so much... #rugby7s #rio2016 #olympics

“When the lockdown started in France, I started posting my workouts on my Instagram page,” the 35-year-old told TRU.

“For the first few weeks that was generally pilates because I had been suffering with quite a bad back at the time. I wanted to try and vary things as much as I could over the weeks because in rugby we have the highest amount of movement variations than any other sport.

“If team sport athletes are not including twisting, turning, fast movements, slow movements and endurance movements in their individual training, then the risk of injuries when they return to team-based training is pretty high.

“So, rather than tell rugby players and other athletes who follow me on Instagram what to do, I showed them through videos.”

Robertson then watched the ‘A Mile an Hour’ documentary and saw that the central character ran each hour, for a full day to equate to a marathon and he also set-up different physical challenges within that.

It got Robertson thinking…

“He slept within that time, taking 20 minute naps here and there, but I wanted to try and set-up a challenge that would really test me and would also raise money for a great charity in the shape of Make-A-Wish,” Robertson, who raised £2792 in the end, stated.

“So, I decided to set myself a different physical challenge on the hour every hour for 24 hours - the 24 in 24 Challenge - with no sleep in between and I got some of my old team mates to get involved in some of the challenges via video link and we posted them on Instagram.

“Strangely I sometimes miss the feeling of the end of a World Series sevens event when you are physically struggling and mentally destroyed too - and this certainly helped recreate parts of that!

“It was tough going, that is for sure, but when I had the likes of [ex-Edinburgh Rugby captain and Scotland Sevens player] Roddy Grant, [former Scotland Sevens player Scott Wight, Scotland Women’s hooker Lana Skeldon and even my dad [Keith, who earned 44 caps for Scotland between 1978 and 1989 and is now 65] join me along with many others. It kept my focus going and was good fun.”

“The challenge at Clermont is exactly what I was after”

Prior to coaching in France, Robertson was a strength & conditioning coach with the Scottish Rugby Academy.

He enjoyed that role greatly, but always kept his feelers out for what might come next and the move to France came at the right time in mid-2019.

“France has been a new challenge for myself and is exactly what I was after,” the man who lives with wife Alexa and daughters Tessa (6) and Mia (4), said.

“It was a big decision for myself and my family to move across here, but Clermont-Ferrand is very multi-cultural area because the headquarters of the Michelin tyre company are here and there are people from all over the world working there.

“The club also has a lot of different nationalities on the playing and coaching staff and that has been really nice too with folk helping us to fit in while the French people have been excellent with us.

“I have a lot of variety within my role which is good for my development while I am also trying to learn French.

“Through the role, I am learning all of the time and I cannot wait for the time when it is safe to be working with the players again on the training pitch.

“We have obviously been keeping in touch via Zoom and WhatsApp, but nothing beats getting out and working with the boys and I want to keep growing and developing as a coach with, hopefully, a number of strings to my bow.”