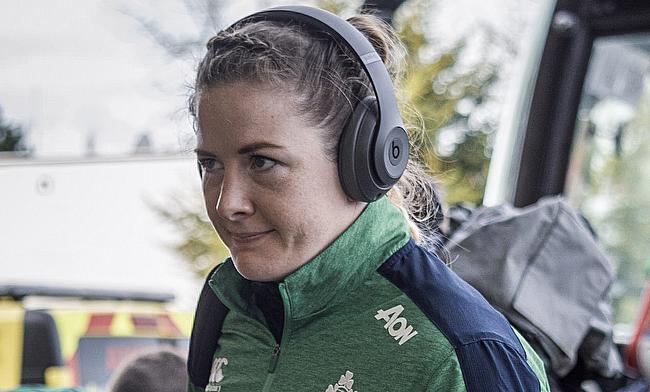 Lauren Delany made her Ireland debut in 2018
©John Ashton

Darren Lamon: 'We see this opportunity as completing the Sharks family'
RFU invite clubs for next three seasons of Tyrrells Premier 15s
Kate Alder Column: 'I'd be lying if I said going into another break is easy'

It was announced at the start of this season that changes would be made to the Tyrrells Premier 15s.

Automatically the likes of Bristol Bears, Wasps, Gloucester-Hartpury, Loughborough Ligtning, Harlequins and two-time champions Saracens were selected to be part of the competition until at least 2023.

For DMP, Worcester, Firwood Waterloo and Richmond it meant that they had to reapply to be involved as a core team in the competition. Little over two weeks ago, it was confirmed that the latter two sides would no longer take part in the women's top division. Both Richmond and Waterloo have rich legacies in the women’s game, with many naturally upset that the two clubs are no longer at the forefront of their sport.

Then come the players. Having experienced the top level, it is understandable that individuals will want to continue testing themselves in the highest club competition that the women’s game has to offer. For some, they want to continue with their international ambitions. One such player is Waterloo’s Lauren Delany.

Only taking up the game in 2014 whilst living in Milton Keynes, it was Delany’s move to the North-West that gained her international recognition. Whilst in the south, the back three player was in National Challenge Two and Three, then upon arrival at Waterloo, it was the heady heights of Championship One before three years in the top-flight.

It was performances in green, white and red that resulted in Delany pulling on an Ireland jersey for the first time. Since thenm the 30-year-old has been a mainstay in the international set-up, representing her country on 11 occasions, and Delany believes that it was her time on Merseyside that offered her the opportunity to play international rugby.

“I think they have been unbelievable in my career,” Delany said. “I 100 per cent believe that I wouldn’t be where I am today, in terms of joining the Irish team, if it wasn’t for joining Waterloo and I massively put that down to the first two years with one of the coaches there, Steph Veal, who I learnt off the most about rugby.

Finding out an hour before the RFU's announcement that the club would no longer be part of the Tyrrells Premier 15s, Delany believes that if she were to be honest with herself then she could understand why the decision was made to cut the club from the competition.

“It was certainly a bit of a shock to the system and we were just mega disappointed I suppose,” Delany said. “If I was completely honest with myself, and a few of the senior players have discussed it, it was maybe not completely unexpected. If you look at our results, I think we came ninth, ninth and then 10th this year.

“In comparison to a lot of the major teams, not much of a surprise, but it doesn’t take away from the disappointment and all the hard work that has been put in over the last few years to come to an end for the club.”

Delany’s desire to be the very best is evident. A relative newcomer to the game in her 20’s, the Ireland international is surrounded by world class athletes every day at work. As the performance nutritionist for British Cycling, the Irish international can be found in the company with the likes of Jason and Laura Kenny at the Manchester Velodrome, as well as plenty of the sports science industries brightest minds.

“I definitely was inspired by a lot of the athletes and seeing their dedication day to day," Delany said. "I was almost a bit jealous of them being a full-time athlete and then, when I got called into the Irish team in 2018, I saw it as a bit of a challenge, thinking that; these athletes are training to this level and have this dedication, how can I match that?

“They definitely inspire me and it is great to be there, in that environment, and I suppose that is definitely one of the elements in terms of my character that has helped me to develop so quickly in wanting to be the best I can be. Challenging myself to go out of my comfort zone as much as possible.”

It is that motivation that has Delany on the edge of World Cup selection next year and it is a prospect which drives the full-back on. With just over a year to go until the tournament takes place in New Zealand, Delany is honest about what her future may hold.

“I think I’d be an idiot to not try and continue playing in the top-flight in England. I am really keen and really excited to develop, improve and play with some of the best players in the world. Waterloo are aware and really supportive, and I suppose I am keen to talk to as many clubs as possible to see what opportunities are out there.

“I’m not closing the door on any team at all to be honest and with everything that is going on in the world at the minute, I’m in no rush to make any decisions or to make any commitments. I’m always keen to learn more, to try out new things. The sky is the limit.”