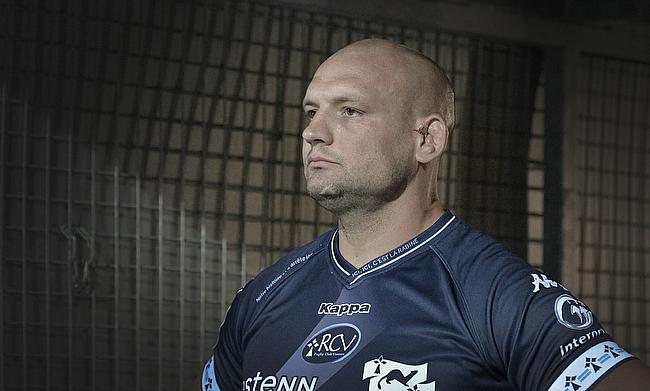 Kendrick Lynn on 'disrupters' Lyon
Peter Lydon on signing for Richard Hill's Rouen Normandie
Vereniki Goneva switches from Harlequins to French side Stade Montois
Tom Varndell: National League values are what rugby is all about

In February, Daniel Tuohy made headlines by describing rugby as ‘rotten to its core’. Now, just over five months on from that statement, Tuohy spoke to TRU's Joe Harvey about his feelings towards the game.

Rather eerily, the image at the top of this article was taken minutes before Daniel Tuohy’s career came to an end.

A club captain for Pro D2 side Rugby Club Vannes, Tuohy’s journey began in his hometown of Weston-Super-Mare, before moving on to greater things with Exeter, Ulster and Ireland.

Lining up for Vannes in their first home game of the season against Oyonnax, the 35-year-old was hoisted by his prop to collect the kick-off. Being lifted at the front and back, his wing got in place behind Tuohy if he was unable to collect the ball. The rear lifter clashed with the winger’s foot, resulting in the Irishman falling to the ground.

Slightly dazed after his head made contact with the turf, Tuohy looked at the palm of his left hand. It was facing in the opposite direction. Thinking it was just a dislocation, he tried to put his limb back in place, but it quickly became clear the reality was much worse. In fact, the humerus bone in his left arm was not only dislocated but broken.

As a result, there was radial nerve damage to the 11-times capped Ireland international, quite common for an injury of this type, and he required surgery. Describing the injury as ‘friendly fire’, Tuohy has now made a significant improvement in his recovery after nearly 10 months of rehabilitation.

“For some people it takes three days, three weeks, three months, all the way up to 18 months or three years,” Tuohy explained to TRU. “It can really take that long. At the time, I suffered a lot of muscle atrophy around my forearm and my arm up until around Christmas. My fingers and my arm were completely useless.

“If you can imagine your hand sitting in a limp wristed position, I just couldn’t move it. I would stare at it and try and move it, but the nerve was not sending the message to the hand to move. It was a tough couple of months, and I saw some improvement after the new year and fast forward seven months, my hand is moving fine.

Read if you wish. pic.twitter.com/hMeQwUgGSW

“I have still got nerve damage to my fingers and the sensation on the top of my skin is not 100%, but day to day living is fine. I knew pretty early on that I was going to retire through the danger of re-injuring this. I could completely paralyse the nerve. I was unlucky. I remember telling my wife that it would be the last injury I put her through. I have had plenty of time to get my head around it.”

As alluded to at the very start of this article, Tuohy described rugby as ‘rotten to the core’. Strong words. Having picked up the game as a 17-year-old, he fell in love with the values of the sport during a period where rugby was still shifting between the spectrum of professional and amateur.

Now a quarter of a century into being a professional sport, rugby union is polarising. Of course, there are tremendous positives about the game being professional and athletes being allowed to play the sport they love full-time, but there are still those that believe that the reason the game was enjoyed by many is dulled with all the money that has come into the sport.

“I first fell in love with rugby, properly, when I was 17,” Tuohy said. “I fell for it because there was always an element of hands on coaching, an element of camaraderie, a little bit old school mixed with a progressive mindset. I think now, and money is incredibly important because they (clubs/unions) are all being run by businesses and I fully understand that, but there is a real human element that has been sucked out of rugby.

“Shortly after what I said, a lot of things have come to fruition. The Saracens thing blew up, but the comment from me was borne out of the wages scenario in the Championship. Having played in the Championship myself, I think that with English rugby and all over really, they are so top heavy that they seem to forget the guys that had a hand in getting them there.

“England players, and it’s not their fault, they have done an unbelievable job negotiating £25,000 per Test match. About 50 per cent of that England squad has played in the Championship and then Championship boys are scrambling around for medical insurance on £20k a year. You just ask yourself why you are putting yourself through this mental and physical torture when you see guys around you getting cut.”

Playing for Exeter and Bristol in the Championship, Tuohy’s name was made in the white of Ulster. Gathering 11 caps for Ireland over five years, the lock forward gained his international debut just a year after moving to Northern Ireland from Exeter.

Scoring a try whilst on tour to New Zealand, the 35-year-old believes that he overachieved in some sense, having only picked up the game as a 17-year-old, but also that he underachieved in not gaining more caps.

Potentially moving into coaching as a stop-gap before starting a career further removed from the rugby sphere, Tuohy has thoroughly enjoyed his time in France. A loan, organised by Bristol, to Stade Francais led to him to Vannes in Brittany. The club has recently made headlines, having brought Nick Abendanon out of retirement in order to turn out for the Pro D2 side.

On Talking Rugby Union in recent weeks, we have highlighted the changes taking place in the Championship and Premiership. A series of pay cuts and a movement to semi-professional rugby means many players are on the look out for clubs. In France, there are essentially three professional leagues, with the potential for some of those players to relocate onto the continent in order to make their living.

“It is going to leave a lot of guys out of contract, normally they can find sanctum in the Championship, think about converting into the real world, but I think now, guys are going to start looking elsewhere because I don’t think the money is always going to be there in English rugby. In France, it is a completely different model. You have presidents at each of the Top 14 clubs and you go down to Pro D2 and there are 16.

“So, there is 30 professional clubs all run by separate presidents that don’t have to answer to anybody. When you step down to Federale 1, every one of those clubs is professional or paying a liveable wage. You are talking a lot of clubs and a lot of rugby players. There is only a certain amount of spots for non-French players, but I have seen a massive amount of guys looking to try and get here.

“I have spoken to guys and said that if they go to Fed 1, don’t think that you will go there and change all these guys so that they are training professionally, eating professionally and thinking about rugby to be the best they can be. You have to enjoy what France gives you as a country because it is just an incredible country, an amazing place to live and the weather is fantastic, but don’t think that you are going to come here to become a better rugby player.”

TRU Talks: Nick Williams on his career, retirement and the Pro14