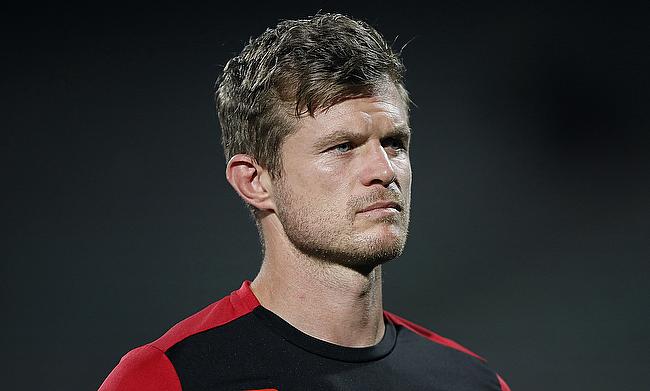 Kendrick Lynn has been with Lyon since 2013
©MarcGalaor/LOURugby

Lawes, Biggar among 19 players to sign contract renewals with Northampton Saints
Japan 2019 most economically successful Rugby World Cup ever
Who will win the 2023 Rugby World Cup?
Philippe Saint-Andre - Back in rugby with Montpellier

As a player, Kendrick Lynn twice gained promotion to the Top 14 with Lyon.

In 2014, he played a vital role in helping the side secure a place in the top tier of French rugby, but Les Loups went on to suffer an immediate relegation back to Pro D2.

However, Lynn was able to regain top-flight status with the club once again in 2016 before retiring in order to begin his coaching career with the side.

Moving to France seven years ago, Lynn had previously played for the Highlanders in Super Rugby as well as the New Zealand Sevens side. Joining a youthful coaching staff at Lyon as a backs coach, the French outift have become a consistent performer in the Top 14, finishing 10th, fifth, third and they were on course for second spot in 2019/20 prior to the cancellation of the competition due to the coronavirus pandemic.

Working alongside Director of Rugby Pierre Mignoni, forwards coach David Gerard and scrum coach David Attoub, the average age of the side is only 40, with Lynn believing that the staff represents the team and the way in which they are viewed.

“Although we are historically one of the oldest clubs in France, we are almost the new boys on the block, the young up and comers that have come up from the second division and I think the staff reflects that a bit,” Lynn said.

“It helps bringing in a bit of extra energy, quite current with what is going on in the game. I think we also have to be mindful of the fact that we are young, and I guess that we need to make sure that we are learning as much as we can and bring an energy, an enthusiasm and communication with the team.”

Following changes to the French Federations JIFF regulations, less foreign players are allowed in a matchday squad meaning that there is more of an emphasis on the production of players through the academy systems. For Lynn, although Lyon were re-established in the Top 14 as a result of foreign talent, the Kiwi is embracing the way in which French rugby is adapting.

“When we first came up, we had a clear plan,” Lynn said. "We had an older squad, a more experienced squad with guys who knew how to win and help in those tough games.

“From then, we have put a lot more focus on developing our academy, which was a work in process as well. Bringing in younger, French, dynamic players and developing our game plan to suit. We were starting from zero in a way, even though we had been up and down.”

In recent weeks, the rugby world has been edging closer to contentment and an alignment of international and club calendars. Whilst many of the world’s unions are in conversations about this, French clubs have been far less enthusiastic about the proposed changes.

Proposals have been described as flawed by Paul Goze, president of the Ligue Nationale de Rugby (LNR), and the organisation is due to be supported by European Professional Club Rugby, the group that organises the Heineken and Challenge Cups. Lynn says that he does understand reservations by those in French club rugby.

“I think in general, French rugby is in a pretty awesome state in all honesty,” Lynn said. “I know that the national team has been having average results for 10 years, but I think that is going to change. The Top 14 and Pro D2, they get really good crowds, really good followings, they have got it pretty sweet and I guess it is protectionism where they are asking why should they change something that isn’t broken.

“In situations like this, they need to take into account what is the greater good. I hope the main thing that gets taken into account is the player welfare, in terms of minutes played, that kind of thing, because the French competition is so long. We play 26 games in the Top 14, you have got play-offs on top of that if you make them, you have got pre-season, Heineken Cup or Challenge Cup.

“It’s a grind and the issue is that it dilutes the product. It is not possible to play your best team week in week out. You get the benefit of more games, more television rights, all that stuff, but the product is diluted. To me it is about finding a happy medium between reducing the amount of games so that we can play our best team as consistently as possible, whilst saving players physically and mentally.”

This summer alone has seen a changing of the guard for Lyon. Julien Puricelli, the long serving French lock, has retired at the age of 38 whilst experienced campaigner Carl Fearns also leaves the south of the country to join Rouen in Pro D2.

There have of course been an array of new arrivals at the Mamut Stadium with the likes of Joe Taufete’e, Remy Grosso and Izack Rodda all signing up to ply their trade in the city next season. With the team making consistent improvements in each of their past four years in the Top 14, Lynn believes that Lyon’s mindset has changed drastically.

“I feel like we are making progress every year and I think on-field results have shown that, but you can also see it off-field with our culture and the players self-belief,” Lynn said. “When you are a club that has come up from the second division, that is one of the hardest things to get by, understanding that we are good enough to go through it. I think that is what halted us a little bit in the last couple of semi-finals we made.

“I think it is a psychological thing, but a thing that we are continuously trying to grow along with our leadership, and I am absolutely stoked. I hope that when we get back, we don’t just pick up where we left off. I hope that we can show that we have evolved even more. That’s what we’re consistently trying to do here, to evolve, not stand still and keep pushing the boundary. That’s how we see ourselves, as a bit of a disrupter if you will.”