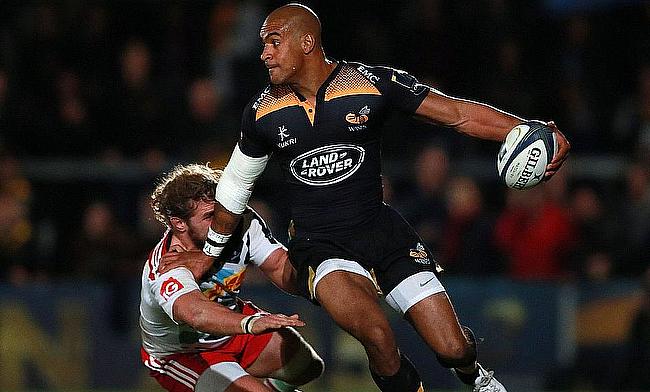 The Springbok at Lockwood Park
Altrincham Kersal: The rugby club which is helping to feed the community
Barnes ‘Big Lift’ smashes fundraising target
“I put my hand up straight away to volunteer” – Henley prop Primett on helping to fight Covid-19

Uru’s leap up the rugby pyramid is credit to the set-up at the GK IPA Haberden and whilst National League players progressing towards, and into, the top flight environment is becoming a well-trodden path, Bury are now experiencing the flip side of that rugby journey.

Last week, the club announced the appointment of Tom Varndell as their new Skills and Attack coach and instead of waving goodbye to a hot prospect in the game, the club are welcoming the Premiership’s all-time record try-scorer to Suffolk.

Joining the Pro-Am as a coach and player next season Tom Varndell
A fantastic opportunity from #wolfpack to #minis!! We were already excited for next season but now we can’t wait!! See our website or @buryfree for full details #rugby #bserugby #bignews #rugbyfamily pic.twitter.com/YOJM7pWuEi

“The vision the club have got is great and it is great to see their plans,” Varndell tells TRU. “I was having a catch-up with the other coaches earlier in the week and the club have improved really well.

“I guess they understood where their weaknesses were and where they needed to be to compete in the league they are in, but also, they can look forward and look up the league as well.

“The drive they have is massive. Although I am fully aware it is not Premiership level or Championship level, they still want to be going out to be a team which is successful. It doesn’t matter which club it is. They have that same goal.

“Also, with the National Leagues, their values are what rugby is all about. Rugby is built on clubs like this. Without these sorts of clubs playing and achieving, the game wouldn’t hold up. It would fall apart. I am actually looking forward to getting my hands dirty with these teams because it is what rugby is about.”

Varndell will join Bury in a coaching and playing capacity, but he admits there is more of an emphasis on the former after the winger recently called time on his professional career. A conversation with his old England 7s coach and current Wolfpack Performance Director Terry Sands followed and it has presented Varndell with an exciting new challenge.

“My top-level days are well and truly behind me,” Varndell says. “I think I realised that 18 months ago. It isn’t anything to do with my love for the game because I absolutely love the game, but in terms of my own drive and hunger for it, it just wasn’t the same.

“When you have played for Leicester, Wasps and Bristol in the Premiership, it’s hard to generate that same amount of enthusiasm and also it has taken its toll on my body!

“For me being the person I am, I do need that outlet though. I need that something for my competitiveness and hopefully I can still do a job whether it be coaching or doing a little bit of playing for Bury.”

With a playing career spanning almost two decades, it is easy to see why Varndell is opening a new chapter in National Two South.

The winger certainly made his mark in the Premiership with Leicester, Wasps and Bristol as his relentless knack to score tries helped him enjoy individual and team success.

His journey continued for another three years after leaving Bristol and to say it was a rollercoaster ride, might be an understatement. Short stints with Scarlets, French Pro D2 side Soyax-Angouleme, Nottingham and a return to Leicester followed before his most recent spell in the Championship with Yorkshire Carnegie.

Varndell admits his time with the Leeds-based outfit was ‘interesting to say the least’ as the 34-year-old was part of a Carnegie side that suffered 14 successive losses in the Championship, which included some humbling defeats.

With the season concluding early due to the Covid-19 pandemic, last month, Yorkshire’s inevitable relegation to National One was confirmed but the option to coach, play and balance his work with sports company Elite Player Management appealed to Varndell.

“Having the balance is so important,” he says. “The sports agency stuff is all-consuming. I am loving the journey and loving doing it, but Bury gives me that release as well.

“I always said that even when my full-time professional career would come to an end, I wouldn’t just leave the game because it has given me so much enjoyment.

“I only ever played the game because I enjoyed it. It was never job, but it only started to become a job over the last couple of years because physically, I probably couldn’t do what I wanted to do. I am 35 this year and these guys are now younger, fitter, faster and stronger!”

Vardnell knows all about the talent young players possess in today’s game. Emigrating into the sports management industry with EPM highlights this, but his own experiences have also given him a first-hand account of how the lower leagues in this country can aid the development of promising athletes who are bidding for a career in the sport.

“Just look at the England team. I reckon 80 per cent of that squad has played in the National Leagues,” says Varndell. “They’ve all come through and all been loaned out at some point. It’s so important that the rugby and the rugby fanbase back all the lower leagues because without those leagues, you don’t have a Premiership and you don’t have a Championship. You don’t have a pathway for younger lads to come through because not every lad plays for England U20s and goes on to play senior rugby in the Premiership.

“A prime example from my younger days was Tom Biggs. He was nowhere to be seen in the academy systems. He was down in a pea factory and he played lower level rugby, but went on to have a very successful career. Players develop at different rates and what the National Leagues do, they provide a place for players to hone their skills.”

This year has shown how amazing sport is at bringing people together. Different cultures, ethnic groups and beliefs, sport has a way of breaking down barriers. I have been to other side of the world and back again. I have made friends and connected with so many different people. For everyone who has been on this journey with me I thank you. France, Australia, Malaysia, USA, Hong Kong and the UK what a year. Now as I embark on a very new chapter I want to help the players of the present and future by working with Elite player management to create a amazing player welfare scheme to help give players all over the world something to make use of. With your help this can happen. Please read the link below. Spread the message and get involved. #playerdevelopment #sportmanagement #future #rugby #sports #mentalhealthawareness #start #makeadifference #networking #fortheplayerbytheplayer #togetherwearestronger #epm #everybody #unite #wellbeingatwork #teamworkmakesthedreamwork #getinvolved #usa #france #malaysia #australia #help https://docs.google.com/document/d/10_t3l0r7mMSARyoQYcSOnrZycglJhvJ8mIW57cVxS4E

Varndell highlights the National Leagues as an excellent breeding ground for forwards in particular and jokes about having to ‘stay away’ from the attritional packs if he does lace up his boots for Bury in 2020/21.

Scoring tries is something which has never been tedious for Varndell and whilst he may get the chance to cross the whitewash next season at the GK IPA Haberden, or when he visits the likes of Rochford Hundred and Redruth, this new experience for a player at top of the Premiership record charts is something he is relishing.

“The foundation of rugby union comes from these clubs like Bury,” he says. “That is why I started playing rugby when I was nine-years-old because that is what I loved. I can imagine there will be a lot of banter and I am looking forward to the after-match stuff as well. They are a little bit looser down in National Two than they are in the Premiership!

“I am very excited by the challenge and one of the reasons for that is that you want to pass on your knowledge and your experience. You want to meet new people. It is going to be great and it will be a different environment, but at the same time, rugby players are rugby players

“Everyone wants to win. Everyone wants to enjoy it and everyone wants to be successful and when we play, we are all cut from the same cloth so in terms of that, I am not expecting anything different to what I experienced at Leicester, Wasps and Bristol. It is about going out there and being part of a team and enjoying journey.”