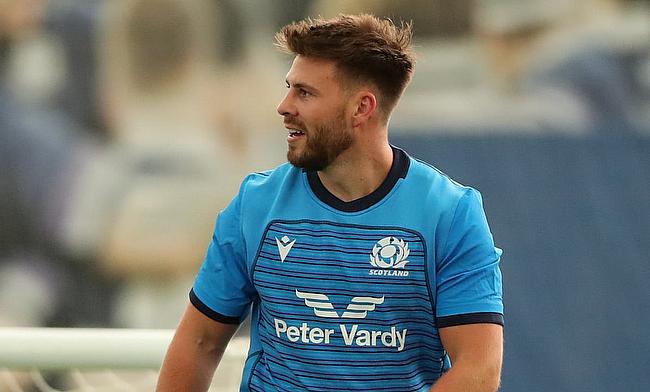 Price struggled without a routine during the first lockdown, but since then, he has taken his game to the next level
©Rugby People

Scotland international Ali Price pens new deal with Glasgow Warriors
'They were lovely phone calls to make': Edmunds and Davidson given chance with Scotland Sevens
Plenty of positives from 2021 for Scotland, but lots more to come in 2022
Price is getting it right: “Ali does everything with a smile on his face”

Like many of us, Glasgow Warriors, Scotland and British & Irish Lions scrum-half Ali Price has had his ups and downs since the pandemic first struck in March 2020.

And, in the week that it was announced that the 28-year-old has signed a new deal with the Scotstoun outfit, the former Wisbech Grammar School and Bedford Blues man has opened up about a period 21 or so months ago that helped him change his mindset and really take his career to the next level.

“I think initially I got a bit lost at the start of the first lockdown in terms of not having a schedule and the uncertainty, I guess,” Price told TRU.

“Everybody was obviously going through it and at the time, I lived on my own and I struggled with not knowing what was going on or when we’d be back doing anything.

“I lost the plot for 10 days, in terms of I was pretty much nocturnal. I ended up staying up all night and sleeping during the day.

“I was playing the PlayStation with some of the boys and it is the thing that sticks in my mind because from then on, I had a change of mindset.

“I had had like four or five beers or something at it was 4pm in the afternoon and a couple of the lads were like ‘what are you doing?’ and at that point, I was like ‘you are right, what am I doing?’ so I set my alarm for 9am the next morning to go out for a run and from then I got the running bug that is for sure and I sorted myself out.”

Sportsmen and women are well known for liking their routine. They are creatures of habit.

In normal times, they have a training schedule for the week and competitive fixtures all mapped out in front of them as well as coaches and other support staff making sure they stick rigidly to the regime.

Last March, that was suddenly taken away from Price, who has been with Glasgow since he joined as a 20-year-old on an Academy contract in 2013.

Returning to the moment when he started running again last year, Price continues: “It was like a switch had been flicked and when we started to get back into rugby, I was obviously in good shape and was able to fulfil my role as a nine and enjoy my job being back around the boys.

“I then met my girlfriend and she moved in and things are good. I don’t really know if that one moment way back is what triggered it all. There has been a number of steps that have helped me grow up off the pitch and helped me on the pitch too over the last year and a bit.”

“I do [empathise with people who have struggled during the various lockdowns and such like]. I don’t know what it is within me, but when I’ve realised that something is starting to slip - or has slipped - I have been quite good at self-correcting and getting myself back on the horse, as it were.

“I am sure I spoke to you guys [the Scottish press] back around 2018 when my performances were not quite there and things weren’t going so well and I managed to correct myself and get back in shape then.

“Everything to do with Covid and everything at the beginning [in March/April 2020] was strange not having a schedule or a routine. It kind of threw me a bit, like it did a lot of people.

“There is thankfully something within me that if I am driven enough to say ‘right I’m going to focus on this’, then I can. It has been tough, hasn’t it?

“Then going back into a team environment, [as elite rugby players] we were very fortunate that with the rules and with the testing we were able to get back into groups and train again. I feel in a good place now.”

Glasgow is home: “I love the place”

There are good years and then there are really good years, and it is fair to say 2021 has been the latter for Price.

He is now up to 46 caps for Scotland, is one of the leaders in that squad, played Test matches for the Lions and, last week, he hit the 100 appearance mark for Glasgow.

His stock has never been higher, so was the man who was brought up down south tempted to move away from Glasgow at this stage of his career?

“For me, everything I’ve managed to achieve in my career has come from being a Glasgow player and living in the city so I always wanted to stay here,” he explains.

“I came up here as a 20-year-old, so my whole adult career I’ve been at Glasgow. I love the place. A lot of the boys have moved on, but there are also boys here that are some of my best mates still. I don’t always think you necessarily have to go wandering, so I was delighted to carry on up here.

On his re-signing, Warriors head coach Danny Wilson said: “It’s great news that Ali has committed his future to Glasgow Warriors. He’s a world-class scrum-half who’s hugely passionate about playing for this club.

“Over the last two or three years, Ali’s development has been clear to see at both club level and on the international stage, which culminated in him becoming a Test Lion in the summer.

“We’re all looking forward to continuing to work with him in the coming seasons.”

Price and his club teammates are due to host Exeter Chiefs in the Heineken Champions Cup at Scotstoun on Saturday at 5.30pm.