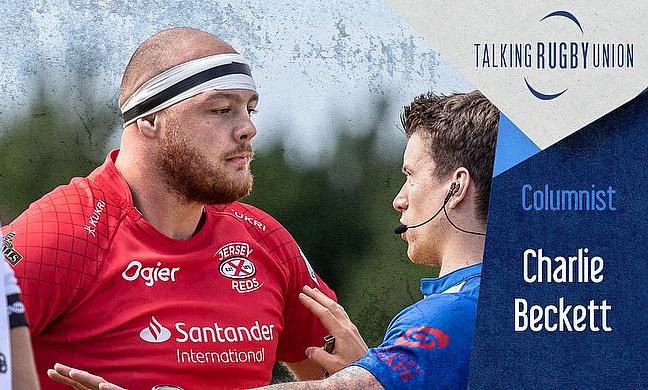 In his latest column for TRU, Charlie Beckett has done something a little different. Picking an rugby team from the stars of WWE, Charlie explains his love for the sport and his selections.

Anyone who knows me, or follows me on social media, will be aware that alongside rugby, I have three major passions in life:

It is the third of these three passions, along with rugby, that I have decided to write my latest TRU column about. The world is a little bit serious and scary right now and I thought that within all that seriousness and scariness it is important we remember to have a laugh, enjoy ourselves and indulge in our silliness. So, with that in mind I would like to welcome you to the very first team announcement for the ‘Charlie Beckett All Star WWE Rugby Union Football Club’.

Where do I even begin with Brock Lesnar? He is 6’3, 130kg, incredibly athletic and quick, unfathomably aggressive and well would you want to scrummage against him? Nope, didn’t think so. In case you are sceptical about his athletic prowess, let me just run you through some of his sporting achievements. NCAA Division 1 heavyweight amateur wrestling champion, 2 time IWGP heavyweight champion, 5 time WWE heavyweight champion, 3 time WWE Universal champion, UFC heavyweight champion and he even once had a place on the roster of NFL side the Minnesota Vikings.

In many different sports the man has been a huge success, so why would rugby be any different? However, he will take up some considerable space in the salary cap, Mr Lesnar does not work for cheap, just ask Vince McMahon or Dana White!

Arguably the most iconic wrestler of all time, Stone Cold was the first name on my team sheet. While there are question marks over his throwing and his history of neck injuries does concern me, Austin is the modern-day hooker through and through. Big, quick, strong and mobile, having him wearing the 2 shirt will be like having a fourth back rower on the field. Also, the man owns a beer company and ALWAYS has two tinnies to hand, no matter the setting or occasion. I have no doubt he will be excellent value and leading the charge on team socials, a characteristic not to be overlooked.

Known as ‘The World’s Strongest Man’, do I really need to say much more? With big Mark at tighthead I’m more than confident we will have a dominant scrum and his immense strength is going to come in useful at lineout time when you see the size of the back five I’ve selected. I will admit his mobility may not be a strong point but all I’m asking for is 50 minutes out of my starting tighthead, I’ve picked a bench to really pack a punch in the last 30.

My Bakkies Botha, my enforcer, my ‘Big Red Machine’. 7 feet tall and 147kg, no one is messing with ‘The devil’s favourite demon’ when he steps over that whitewash. Not the most skilful with ball in hand, but that’s not what I’m picking him for. Rucks will be cleared, tackles will be made, the ball will be carried and opposition bodies will be broken. This man knows his job, and he’s damn good at doing it.

Every Bakkies Botha needs their Victor Matfield, and that is what The Undertaker is to Kane. Together they held the WWE tag team championships twice, so the chemistry is already undoubtedly there. At 6’10 and 140kg he is the ‘smaller’ of my second row partnership and the more athletic and agile of ‘The brothers of destruction’.

Before becoming a professional wrestler ‘Taker turned down a college scholarship to play basketball, so has a great vertical leap and good ball handling skills making him an excellent lineout forward. For 30 years he has been the standard setter and locker room leader in WWE, as well as being a man for the big occasion with an impressive record of 25-2 at Wrestlemania. This makes him the obvious choice to wear the captain’s armband, also, he’s my all time favourite wrestler, and this is my column, so I was always going to make him captain no matter what.

Some will say he’s only here because his father in law is the club’s owner and CEO and while that is true, I have to say that I believe HHH has earned his spot entirely on his own. ‘The Cerebral Assassin’ is physicality personified, as tough as they come (he once wrestled an entire match with two torn quads) and has all the qualities I want from my blindside flanker. His ego can sometimes be an issue though, he keeps asking us all to refer to him as ‘The King of Kings’ for some reason…

His catchphrase was ‘I lie, I cheat, I steal’ was there anyone else I could even consider on the openside flank? At 5’8 and 100kg Eddie isn’t the biggest, but he’s a ball of muscle and energy. He doesn’t stop for 80 minutes and once he gets over that ball at the breakdown, good luck moving him. Also, every team needs a joker, and Eddie is ours.

Big coup for the side this. It took A LOT of negotiating, and the promise of my first unborn son but I managed to convince Dwayne to pack in his ‘somewhat successful’ venture into film and come back to his roots, contact sport. A former American Football player, The Rock will take to rugby like a duck to water, he is the talismanic 8 man this side needs. He also brings a rather handy sponsorship deal from Under Armour with him meaning none of the lads need to worry about stash for the foreseeable future.

Scrappy, elusive and no ounce of quit in him, Rey Mysterio has all the raw materials any great scrum half needs. He is a nightmare to try and get hold of in broken play and front five forwards all over the country will wake up screaming from nightmares of him sniping around the fringes and making them look like fools with his ‘show and go’.

He has a fierce kick on him (as shown in the ring with his 619) but it isn’t always the most accurate. His game management can definitely be improved and while this sometimes gets us into trouble it’s a sacrifice I’m willing to make for the obvious x factor he brings.

Nicknamed ‘The Architect’ Seth Rollins is at his best when he can sit back and pull the strings. He’s smug, he’s arrogant and he believes his own hype, but like any great showman fly half, he can back it all up, there’s a reason he’s one of only 14 ‘grand slam champions’ in WWE history. Known to drive his team mates mad, always carrying a slight niggle whenever it’s contact training, and often found on the business end of a few ‘stern words’ from the skipper, but at the end of the day, would we trade him for anyone else? Absolutely not.

Big. Fast. Powerful. Athletic. Strong. Oh and did I say fast? Arguably the greatest pure athlete to ever step foot in the squared circle, Shelton was a shoe in on the wing from the outset. Granted he doesn’t have the best kicking game but when you can move like he does, do you really need one? At 6’2 and 112kg good luck stopping him from 5 metres out (or 50 metres for that matter).

Bret Hart had two nicknames in professional wrestling. One was ‘The best there is, the best there was and the best there ever will be’ and the other was ‘The excellence of execution’. In short, the man could seriously wrestle and I am fully expecting him to transfer this exceptional ability straight onto the rugby pitch.

A student of the game, Bret spends hours in the infamous ‘Hart family dungeon’ honing his skills and previewing our opponents in order to be at his absolute best when he steps onto the field. Some personal issues with our fullback caused a few issues for a while but thankfully the two of them have buried the hatchet and the backline now works like a well oiled machine.

Coming straight out of the Manu Tuilagi school of outside centres is the 6’5 and 113kg Randy Orton. He’s big, he’s physical and he’s mean. He hits hard in defence and runs hard in attack, you don’t want to be the man tasked with stopping him on a short line. However, there is more to ‘The Viper’ than meets the eye. His ring IQ is second to none and it’s his brains that will mean he thrives at thirteen, widely regarded as the most difficult position on the pitch to defend from.

However, Randy does have a slight issue with his temper and when he starts listening to those ‘voices in his head’ it can get him in a little bit of trouble. If we are ever down to 14 men, don’t be surprised if its Mr Orton you find sat in the sin bin.

The most ‘outside the box’ of my selections for sure. Not the quickest or most athletic of the options available to me on the wing but Edge is known as ‘The ultimate opportunist’ and when you convert that into rugby terms, it only means one thing. Tries.

He’s never going to run one in from 80 metres but he’s always going to be there, getting on the end of your best moves to dot it down in the corner and when it comes to wingers, that’s what’s really important. Also, have you seen this man’s spear?! My god he can tackle, do you fancy him jamming in hard from the wing and getting you man and ball? Good choice, me neither.

‘The Heartbreak Kid’, ‘The Show Stopper’, ‘Mr Wrestlmania’, Shawn Michaels is box office, and on a Saturday afternoon, he’s going to put bums on seats. Also, he’s one of the finest wrestlers to ever lace up a pair of boots and I have no doubt will transfer his skills with ease when changing his sport of choice to rugby.

A somewhat divisive character at times however, I’ve already alluded to his issues in the past with Bret Hart (just google ‘Montreal Screwjob’ if you want to know anymore about this, it’s properly bonkers) but he also manages to rub Seth Rollins up the wrong way a lot of the time on the pitch too.

The issue is, both men are too alike for their own good. I think Shawn is secretly bitter that he isn’t playing 10 and therefore tries to override a lot of Seth’s calls during the game. However, when they work in sync, having these two ball players as genuine options at first receiver keeps opposition defences busier than a one armed trombone player.

Club legend who is always around (every club has one.) He is either in the bar, in the clubhouse, watching training or on the bus to away games. Always wants to chat with the lads and tell them stories of the ‘good old days’ but will always do whatever he can to help the team, no job is too big or too small. Always a suspicion that he’s drunk, even if it’s 7am. No one really knows why he’s always there, or why he’s allowed to be, but everyone has the utmost respect for him and agrees that ‘back in the day’ he was one of, if not the, best to play the game. (Also he’s always randomly shouting ‘wooooo’): Ric Flair.

What is the best Super Rugby margin to pick in tipping competitions?