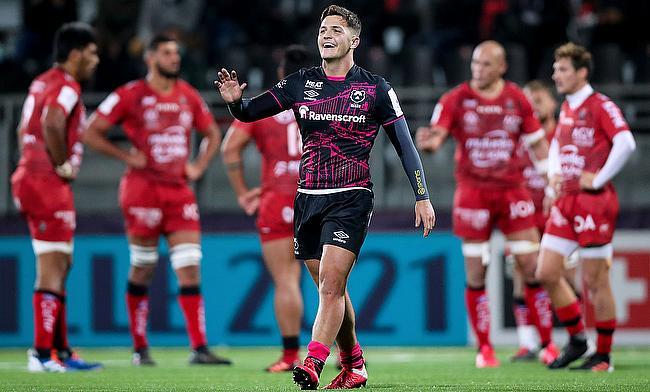 Ugo Monye Interview: Being a rugby player doesn’t mean you are immune from having a bad time
Match Centre: Bath Rugby 20-40 Bristol Bears
TRU x Looseheadz Podcast: Callum Sheedy
Exclusive: ‘It is still in our hands’ – Bristol Bears’ Callum Sheedy on the battle for the top four

He may have been down the pecking order when Pat Lam first arrived at the club, but Callum Sheedy has become one of the most important cogs in the relentless Bristol Bears machine.

On his return to the West Country after a loan spell with Jersey back in 2017, he was, in his own words, ‘the third or fourth choice 10’ at Ashton Gate.

However, under the guidance of Bristol’s inspirational Director of Rugby, the 25-year-old has grown into one of the key leaders for Lam, which is complemented by his classy style of play.

Following his exploits in the Six Nations, Lam, of course, was full of praise for the Welshman but given Sheedy’s humble personality, it is not surprising to hear the fly-half admit he is content with staying in the shadows.

“It is always nice to get individual recognition, but I am more than happy for Semi Radradra, Charles Piutau, Maxy Malins, whoever it is to sort of take the plaudits.”

Hand the ball to Semi Radradra, sit back, and enjoy ??#GallagherPrem pic.twitter.com/As7NGIJWAF

The role Sheedy has played in helping guide Bristol to the summit of the Gallagher Premiership table cannot be underestimated. He recently missed the club’s titanic tussle against title rivals Exeter Chiefs due to injury and whilst he would never admit it himself, his influence on proceedings was sorely missed from a Bears perspective.

Instead of basking in his own self-indulgence, Sheedy is focused on producing performances which will allow the league leaders to continue on their upward trajectory.

“I can sleep well at night knowing that I have hopefully given my teammates the right pass or whatever it might be which is great!” Sheedy tells TRU. “The standard which the boys in the squad are playing at means you don’t want to be left behind by them.

“For me personally, I know I have got to put in those extra hours because I am probably not as naturally gifted as some of the names I've said. I have got to sort of work harder to play at their level and get anywhere near their level so I am more than happy to put that extra graft in with Sean Marsden [Skills Coach], Omar Mouneimne if he needs my defence or whoever needs me.

“Honestly, when you get to training, it is so enjoyable to work with these guys because they are operating at a world-class level day in, day out so for me to be able to compete with them in certain aspects, I have got to pinch myself.”

Last weekend in the Bears’ 40-20 victory over Bath, Sheedy started his first game since April 17th after he was left with no feeling down one side of his body following a late, no arms tackle against Newcastle Falcons.

After a frustrating first half at the Rec, Bristol’s stars went on to confirm their play-off place with four games remaining in the regular season.

But rather than the post-match conversation focusing on Bristol sealing their top-four spot, Kyle Sinckler’s interview with BT Sport was rightly discussed.

Last week, the Bears prop was left out of Warren Gatland’s plans for the upcoming British and Irish Lions tour to South Africa, but Sinckler couldn’t hold back his emotions after a tough few days for the England international.

Sheedy feels the environment which Bristol have created over the last four years played a part in his teammate not only expressing how he felt but it also allowed the 28-year-old to deliver a man of the match performance.

Whilst Lam as always continued to raise the bar in terms of on-field success since he walked through the doors at Ashton Gate, the Bears boss has placed equal importance on culture and the happiness of his squad.

“Just by connecting with each other, you’re forming that bond” - @Sheedy95

We discussed what having a ‘good’ culture really means and how Pat Lam’s mentality has got the @BristolBears boys treating each other as if they are brothers.

“I have watched Kyle’s interview over and over this week,” Sheedy says. It is so moving. The way he spoke from the heart is so inspiring, not just for people who don’t know Kyle like young boys and girls but also for people like myself.

“I am very inspired by the way he speaks and the way he reacted to the announcement of the squad. Leading up to that Bath game was tough because I think everyone thought Kyle was nailed on to be in there and I didn’t think it was up for debate.

“During one of our first meetings with Pat actually, he talked about culture being about ‘Love’. The boys were looking around and weren’t sure about it! We were wrong. When you break it down, love is caring about the guy next to you and when you do become so close like we are here, that culture just rubs off on each other. Love can be expressed in many different ways and everyone just supported Kyle and to see him perform the way he did was so amazing and he and Pat deserve so much credit for that.”

The emphasis on having a positive mindset is something that Bristol and Sheedy embody, and mental wellbeing is a topic which the Bears fly-half is keen to bang the drum about.

The Wales international is an ambassador for both Restart and the rapidly growing mental health charity Looseheadz: “It has been huge for me. Working with Looseheadz, there is that emphasis on mental health and as rugby players, we are no different from ‘normal people.’ We still get affected by mental health.

“That is the thing with rugby players. We can be seen as been varnished in this ‘macho’ brand and you can’t speak out because you look soft, but the more that Looseheadz and Restart do and the more we talk about it, it means more people will speak out and have the confidence to speak to someone.”

The Covid-19 pandemic has made the last 12 to 14 months extremely difficult for so many people in society including rugby players, but on Monday, a strand of normality will be restored to our lives.

From the beginning of next week, fans will be allowed back inside stadiums for the first time in 2021 which means 3,318 supporters will make their way to Ashton Gate to see Bristol take on local rivals Gloucester.

The Bears haven’t played in front of their home crowd for 15 months and Sheedy is looking forward to their return: “It has been so long since we had fans at home,” the Welshman adds.

“We have missed them. The thought of having a few thousand on Monday and hopefully building towards even more for London Irish is so exciting. As a whole squad and a whole city, we just can’t wait to be back together and it is great for the local community too because they have not been able to come and watch us for so long.”

But something which the Bristol faithful and to an extent Sheedy are becoming accustomed to is challenging for honours.

After falling short in the Premiership play-offs last year, the Bears lifted the European Challenge Cup for the first time in the club’s history, whilst on a personal note, Sheedy also experienced international success in the Six Nations with Wales.

Once again, there have been no backwards steps taken by Bristol in their pursuit to be the best in the land and now the countdown to the Premiership semi-finals is well and truly on for Lam’s side.

“We are now at the make or break stage so we either really embrace it and enjoy the challenge or you crumble,” says Sheedy. “We are sort of going into unknown territory. Being top of the league with four games to go, that has never happened for us despite what we experienced last year with being in the play-offs and a European final.

“It is really exciting and I am pretty confident we won’t be going into our shells. We very much pride ourselves on having a no fear attitude so let’s make sure that is the case for the last four, five, six weeks of the season and see where it takes us.”

If Sheedy and his teammates do continue to shine, the title-chasing Bears, and himself, will carry on being in the spotlight rather than the shadows.