Exclusive: ‘It is still in our hands’ – Bristol Bears’ Callum Sheedy on the battle for the top four 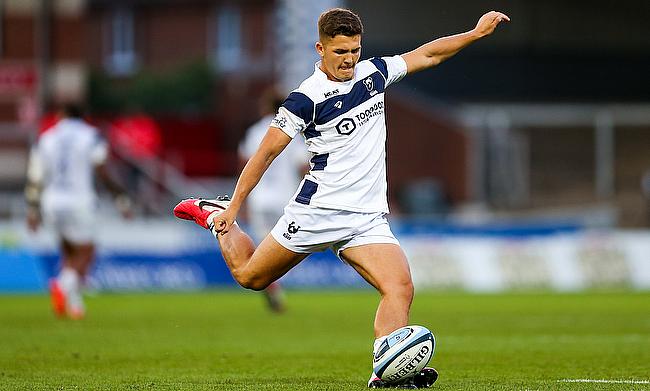 Bristol Bears fly-half Callum Sheedy says his side must focus on themselves in the race for the top four in the Gallagher Premiership as the season approaches a fascinating climax.

Having not experienced the play-offs for 13 years, Pat Lam’s charges are in a healthy position to earn a semi-final spot this term.

A superb 47-10 victory over Northampton Saints on Tuesday night leaves Bristol in third place ahead of a crucial clash with fellow top four hopefuls Wasps this weekend.

With rivals Sale Sharks also hosting Bath in Round 20, this Sunday could see the Bears take a huge step towards the play-offs and with just three league games remaining, Sheedy feels Bristol have to solely concentrate on their own job.

Speaking on the new series of the Looseheadz x TRU Podcast, which will be released next week, Sheedy said: “It was a good win on Tuesday against Northampton. We didn’t make things easy for ourselves at the start of that second half, but we got over the line.

It's far too easy for Bristol!

“It is ridiculous how tight it [the table] is. It just takes one slip up and you’re out or one great game and you’re in. Wasps have been outstanding since the return. Wasps going away to Saracens with a lot of changes last weekend, you have to say fair play to them.

“It would be easy for us to look at other teams and it would obviously be nice if they drop points, but all we can concentrate on is the fact that it is still in our hands. If we get 15 points from the next three games, we will be in the play-offs so I guess that is all we can look at.

“At the start of the season, we set our goals out and our goal for this year was a top six finish. Top six doesn’t mean sixth. Top six can mean number one. We have to have the mindset of taking things game by game, but looking at the bigger picture, there is no reason why we can’t go far.”

Bristol’s ambition to challenge for the Premiership title has clearly been bolstered by their new arrivals, who joined the club before the season restarted.

The likes of Kyle Sinckler, Ben Earl and Semi Radradra have all caught the eye since the campaign resumed in August, with the latter producing some standout performances for the Bears.

On Tuesday night, Earl deservedly picked up the man of the match award, but Radradra showed his star quality once again and Sheedy believes there is still more to come from the Fijian international despite a sensational start to life in the Premiership.

Sheedy added: “He’s not bad this Semi guy! He’s honestly different class. We saw him in training before the games started for a few weeks and you could tell he is the real deal. Seeing him in games now, I still think there is more to come from him! He does stuff in training which is ridiculous! He’s the ultimate professional. He’s first in and he’s last out. He’s like a god! I can’t speak highly enough of him.

“When I had seen Semi had signed, I was buzzing. Just watching him at the World Cup, I was fanboying him thinking this guy is a joke! Just to have the chance to train next to him is really special and I do have to pinch myself at times! It is really exciting as to how good he could be and how good he make us.”

Whilst Bristol’s new recruits may have grabbed the headlines, Sheedy has been a permanent fixture in the Bears line-up this season.

The 24-year-old has started all but one of the club’s Premiership matches and his excellent performances have helped guide the West Country outfit towards the play-offs.

Sheedy, who is currently second behind Harlequins’ Marcus Smith in the top points scorer charts, was at Bristol prior to Pat Lam’s arrival in 2017 and the fly-half admits his progression as a player has been down to his Director of Rugby.

“At the time when he came in, I was probably third or fourth choice fly-half,” Sheedy said.

“I’d just come back on loan from Jersey, my skillset was average and I probably thought I was better than I was. I couldn’t buy a game, but he sat me down and asked me what I wanted to be.

“I told him I wanted to play international rugby. He said that was good that I wanted to do that, but it was about how I was going to get there. He put a process in place and that was important.

“We put in stepping stones so I had to work on my passing game, my kicking game and we worked through it week by week and then I went from fourth choice to third choice. He saw me working more so we had more trust and then that builds.

"I would never have been in a position to start in the Premiership if Pat hadn’t of sat me down and set some steps. If I didn’t meet Pat, I don’t think I would be where I am now.”

The new series of the Looseheadz x TRU podcast will be released next week. Missed the first series? Catch-up here