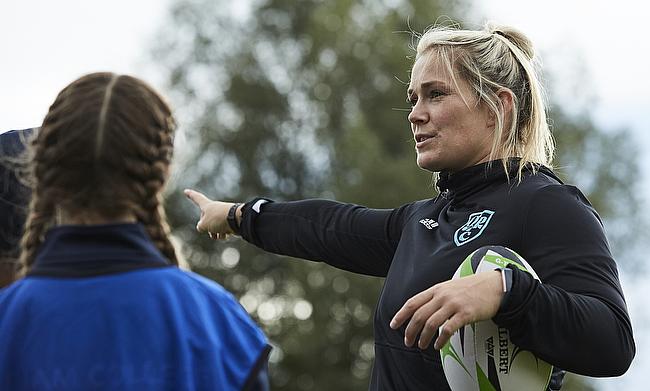 For Harlequins star and England legend Rachael Burford, the eight-month period without the Premier 15s has been a busy one.

Maintaining a focus in the absence of the women’s top-flight was always going to be a challenge, but Burford has juggled her preparations for the new campaign with her devotion for growing the game.

When the 2019/20 season was cut short back in March due to the Covid-19 pandemic, Quins sat second in the league standings, just two points behind table toppers Saracens. Burford, herself, admits it was tough to see the term cancelled with Harlequins once again in the mix for the title but rather than dwelling on any disappointment, the centre has been proactive in raising the profile of the sport.

In April, her #LockdownSquad initiative gained traction across social media with the objective to encourage people of all ages, abilities, and levels of experience to engage with rugby by taking part in small drills and exercises. Burford used her platform of ‘The Burford Academy’ to garner a wealth of interest, but now she has taken her efforts to the next level following the launch of the ‘Girls Rugby Club.’

“There was only so much I could ever do on my own with the Academy,” Burford tells TRU. “Over the lockdown period, the amount of responses I got from putting some resources and support out there showed that there is not enough out there, especially for girls.

Here’s why our founder @rachaelburf12 felt we needed to create Girls Rugby Club: “There are opportunities out there but they’re quite limited and I think we’re facing an uphill battle now more than ever with the impacts of covid having a disproportionate effect on women’s sport worldwide.” “It is very important to me that we have a place that is for girls, a place to create incredible moments and a place where they can feel a part of something that’s bigger than just their local rugby club or themselves. The Girls Rugby Club will be somewhere they can feel part of a global community that’s all about driving and normalising girls and women in rugby.” ?? #enough #iamenough #womeninsport #womeninspiringwomen #cantseecantbe #womensrugby #girlsrugby #premier15s #rolemodels #builtbygirls #thisgirlcan

“The idea for the Girls Rugby Club is that we want it to be a global project that is aimed at providing pathways for girls and women within rugby, but we also want to try and tackle some of the negative stereotypes and the inequalities. How we can support that and make change moving forward is key. It’s pretty exciting, but there is a lot to do! The response has been overwhelming. Everyone wants to be involved and that is the whole idea about this.”

The level of support which Burford has generated thus far has been particularly impressive. A number of internationals who are scattered across the globe have already joined the movement, from World Player of the Year Emily Scarratt to Becky Wood, who played against Burford in the 2017 World Cup final for New Zealand. By boasting a list of high-quality players, the hope within the Girls Rugby Club is that these stars of the game will be able to inspire the next generation.

“When I have coached on some my Burford Academy camps, I might drop in the name of Emily Scarratt or Katy-Daley McLean and girls don’t know who they are,” Burford adds. “We want to showcase our role models in the game to inspire others. Our camps and online modules that we will have as part of the club, they will include expertise from exactly the right people.

“Let’s get England captain Sarah Hunter doing a module or try to incorporate players from around the world to share their experiences and knowledge so that we have a young girl who wants to grow up and be the next Sarah Hunter because she has done a module with her. Let’s use them and the gift that they have to really help inspire the next generation. If we could have camps running in Australia and New Zealand, where Sharni Williams, Ruby Tui or Kelly Brazier are doing sessions, then let’s do it collectively together. Let’s talk, let’s share and have conversations and change what happens next within girls rugby.”

‘Change’ is an important part of Burford’s plans going forward and over the course of the last few months, it has been an underlying theme in the women’s game. The #IMENOUGH campaign initiated by Wasps star Florence Williams put the spotlight on the perception of females in the sport and the movement is aiming to tackle the negative stereotypes which unfortunately still exist, something the Girls Rugby Club is also hoping to influence.

“The great thing is that any top player that wants to be involved with us, they have got their own experience that will 100 per cent relate to the girls that are part of the Girls Rugby Club that are growing up in this sport right now,” Burford says.

“It is about them saying, ‘I’ve been there, I’ve done that, I’ve survived and look where I am now.’ It is about normalising both sides of it to say people have been through this, but you can come out the other side of it. It is to show that you are not alone. When you go to school, people might be like ‘oh, you play rugby’, but actually, there are probably hundreds and thousands of girls who feel exactly the same. It is highlighting those types of issues and saying it is normal that I do play.”

She may not admit it herself, but Burford most certainly falls under the ‘role model’ bracket and the centre, along with her Harlequins teammates, will be keen to maintain the growth of the women’s game when the Allianz Premier 15s season kicks off this weekend.

Earlier this week, the fixtures for the competition were released along with a series of new law variations which are in place to reduce the potential transmission of coronavirus during a game.

The new regulations will see a significant decrease in scrums while halves have been cut to 35 minutes each way due to the anticipation of more ball-in-play time.

“We have had that day [start of the season] in our diaries for about four or five weeks, but it was never confirmed!” Burford adds. “Nothing was confirmed until literally Tuesday. We knew when everyone else found out, but now everyone cannot wait!

“We know it is going to be different with the law variations. I think you should probably be asking the front five because I think they are going to miss a few of their scrums! I think the biggest adjustment is that there is going to be more ball-in-play time.

“It might be quicker at times, it might be slower at times because of the fatigue in the game etc so it could open up to be quite exciting. It is going to be fascinating what comes of the law variations because you never know, they might stick in the game and catch on elsewhere.”

The Allianz Premier 15s season will kick off this weekend ??

Law variations have been approved to lower the risk in line with the Government's Elite Sport Return to Play Guidance.

In the men’s top-flight - the Gallagher Premiership - every single player involved has been regularly tested for Covid-19 but in the Allianz Premier 15s, only players who attend international training camps such as the contracted Red Roses are being tested.

Before the new campaign as even begun, the fixture between Bristol Bears Women and Wasps FC Ladies has been postponed after one Bristol player tested positive. At Harlequins, Burford and her colleagues are following strict protocols including mandatory temperature checks on arrival, enhanced cleaning regimes and tracking players in training.

Whilst Burford knows the health and safety of all staff and players is paramount, she feels the importance of the league restarting is necessary for the continued progression of the women’s game.

“Nobody is taking it lightly that we get to play at the weekend,” Burford adds. “For whatever right or wrong reason, there isn’t the amount of money there to test ever single player so what the RFU have said rather than sitting back, they have actually said let’s look at the game and how we can really reduce the risk during a match.

“I think players just want to play and get back to playing their sport. We have to trust each other that we are being diligent and we are mitigating any risk possible of getting the virus. We have to be very responsible, that if we do get any symptoms, that we are very honest and open about it.

“I think the players are appreciative on that front because there has been so much hard work done behind the scenes in order to get us to where we are. Everyone wants to go out there and do the sport proud and get the league up and running.”

Female rugby players of all ages and abilities worldwide are invited to attend the very first virtual Annual General Meeting of the Girls Rugby Club in what will be an opportunity to discuss and share some of the challenges facing the women’s game, to table potential solutions and to provide input on shaping the Girls Rugby Club at its inception. Heading the meeting will be Rachael Burford and other founding members. To register your interest please email reception@girlsrugbyclub.com.