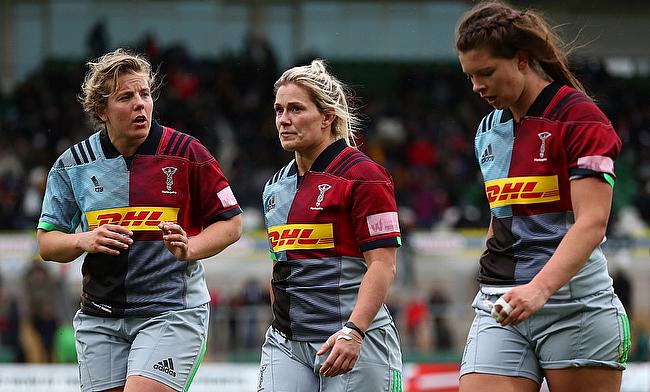 RFU invite clubs for next three seasons of Tyrrells Premier 15s
The fabric of Loughborough University
Sally Stott: “I will treasure the years I have spent playing for Edinburgh University”
England Women - 'We are never going to stop'

The situation we all currently find ourselves in is an unprecedented one.

It has been over three weeks since the UK went into lockdown due to the coronavirus pandemic and during this period, social media has been awash with ideas of how best to keep ourselves entertained.

Sporting challenges and numerous quizzes seem to be the frontrunners, but when it comes to rugby, you only have to take a quick look at Rachael Burford’s Twitter feed to get your fix.

The Harlequins and England centre launched ‘The Burford Academy’ with the aim of encouraging people of all ages, abilities, and levels of experience to take up the sport. Burford had planned Easter half-term camps, but due to the Covid-19 outbreak, she has had to think outside the box, which is where the #LockdownSquad was born.

“I just started doing some video and filming what I was getting up to,” Burford tells TRU. “I was showing people you can still do skills even though we’re on lockdown, but then I thought I could do this better and properly!”

Since formulating the idea, over 900 people have signed up to the ‘Lockdown Squad’ programme which consists of daily videos, drills and skills, weekly challenges and monthly prizes. “When I put it together, more ideas started to pop up and it grew into this four-week programme,” adds Burford.

“It is not taxing! It keeps people challenged and engaged with rugby. Who knows, we might get a few new people involved! It has been so well received. I don’t think I really expected it and I hope it is helping and giving people something to focus on.”

It is not just the physical and fitness aspect which the 2014 World Cup winner is keen to hone in on. During these difficult times, mental health awareness is a topic which is in the public domain and Burford is using Wednesday’s in particular, as a chance to reach out and help people who might be struggling.

“We have got amazing rugby players in this industry, but we have also got some brilliant people too,” she says. “Lydia Thompson, for example, is a qualified occupational therapist so she has been great at giving self-care tips on social media for the academy. Things like this really do help.”

Another element of the academy is ‘Teammate Thursdays’ which challenges people to train with players such as England star Vicky Fleetwood, who has shared the international stage with Burford in the past.

From Burford’s perspective, interacting with her fellow professionals like Fleetwood, as well as other friends in the game, was part of her day-to-day life before the coronavirus outbreak, but because rugby is at a standstill, her social engagement and routine isn’t as constant as it once was.

“I have got so much out of doing the social media stuff,” Burford says. “Just chatting to some of the players, it is nice to have a laugh with some people and share some funny stories and it did so much for me.

“I never really call these people because I see them all the time! The Lockdown Squad is a way to connect with people and that is something I want from it. I want boys, girls, men and women to connect and do a circuit together with family and friends. It is important to reach out to people.”

Whilst her excellent work with the Burford academy has kept her busy, the Quins star has also continued to grow the Women’s Rugby Podcast alongside Johnnie Hammond.

In previous episodes, Hammond and Burford discussed the decision to null and void the Tyrrells Premier 15s campaign, but last week, the main talking point in the women’s game was the announcement that Exeter Chiefs and Sale Sharks will both have representation in the TP 15s next season.

The duo will replace Richmond and Firwood Waterloo and Burford has been impressed by the initial aims laid out by both Exeter and Sale as well as the strong support shown by their respective men’s teams.

2/2 So much content captured this week!We heard from the two new additions to the @Premier15s teams @SaleSharksRugby & @ExeterChiefs about how thrilled they are to have secured a place. Two Clubs hugely committed to the Women’s game!what they had to say?? https://t.co/8toWvcCOhu

“I am really pleased for Exeter and Sale,” adds Burford. “Sale and Exeter have both exclusively said how much they want to invest in the women’s game. That’s what we want. We need clubs and teams in this Tyrrells Premier 15s that are ambitious and that have big goals because if we just keep sitting still, it is never going to get anywhere.

“From the last three years, Harlequins closely followed by Saracens, have been the leaders in investment and driving the game forward and we need more clubs like that. The rest of the Tyrrells 15s have massively increased their coverage and investment over the last few years with Loughborough Lightning, Gloucester-Hartpury and now Darlington Durham Sharks showing strong links with universities and colleges and we need that desire across the whole of the league.

“What really struck for me is what Steve Diamond [Sale Sharks Director of Rugby] said about driving elite performance and when you have got the boss saying that, it does go along way and it doesn’t disappear either. A lot of chat has come out of both Exeter and Sale and I am really looking forward to seeing it all develop.”

The recent growth of the Tyrrells Premier 15s has played a part in the success the Red Roses have experienced over the last 15 months or so. England romped to a Six Nations Grand Slam last year – with a squad which included Burford - and they were on course to repeat that feat in 2020 before the Covid-19 outbreak.

Simon Middleton’s side have their sights set on the World Cup in New Zealand in 2021 and Burford feels a high-performing domestic league can only aid the progress of the national team.

“If you look back at 2006 and 2010 and even the 2014 World Cup as well, we mainly heavily relied on the fact that we had very talented players that played in a decent league,” adds Burford. “There was no real link between the international game and club rugby. That is certainly completely different now.

“The clubs are there to serve a purpose for England Women. They are there to make them the best product they can be so actually when they go to England training, we are not starting at the beginning because we have laid the foundation already at club level. It means you can hit the ground running at the next level because we have a strong domestic set-up and ultimately, that can help if we want to bring back the cup next year."

Burford, who has been capped 84 times by her country, is constantly focused on playing to the best of her ability and with the help Muhdo, a company which can produce the most conclusive DNA profile as well as access to personalised workout & diet plans to achieve health & fitness goals, she is keen to keep searching for marginal gains.

“Understanding the DNA behind it all kind of just blew my mind when I first got in touch with Muhdo about a year ago,” says Burford, who is one of the ambassadors for Muhdo. “I have done lots of things to try and get that extra 1 per cent. When you get to the elite level, you are never the end product but you are always looking for that 1 per cent top up on everything you are doing. Talking to the guys at Mudho about what your DNA represents helps because you can use that to really fine tune everything you do.

“I did their DNA testing, got the feedback and using that app helped with my nutrition and training. It is great because you are linking everything together.”

Muhdo have also arranged a discount with Rachael for the DNA kits (£69.99 down from £119.99). Use the discount code (BURF70) when checking out online to apply the discount!