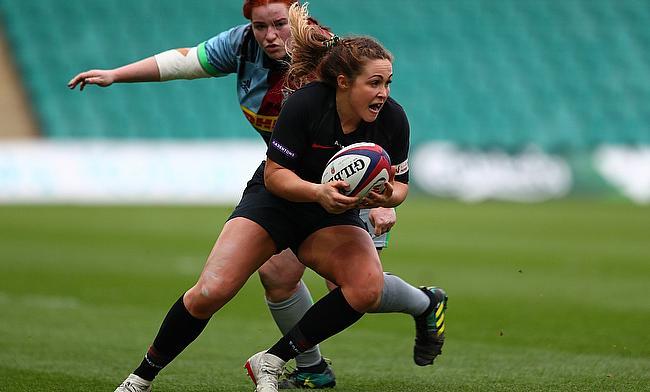 Exclusive: Richard de Carpentier - It feels like the only people not supporting us are the RFU
McMillan lays down the 'law' as she targets more caps for Scotland
Robbins finds balance is key as he looks forward to the future
First round of Irish Sevens' Covid-19 testing returns zero positive result

Sydney Gregson has been a professional rugby player for just over a year, but at the end of August, alongside all of her sevens colleagues, she will receive her final pay cheque from England Rugby.

Because of the financial constraints as a result of Covid-19, the RFU felt as if they had no choice but to cut the England’s Sevens programme. It is a programme that was the basis of Team GB’s successful Olympics in Rio and less than a year out from the Games arriving in Toyko, the nation's core athletes for the sevens competition may not be playing the shorter format of the game in the lead up to Japan.

It had been a disrupted season for Gregson after a foot injury last August required surgery meaning that the former Saracens and Bristol back could only represent her country at the Hamilton and Sydney legs of the World Sevens Series.

Now, Gregson must head back to 15-a-side rugby with it looking unlikely that professional sevens will return any time soon.

“It has been a little bit blasé, not too sure what it is going to look like,” Gregson said. “It is looking unlikely, with RFU funding that it is going to happen. It doesn’t look like it is going to be professional. We are waiting to see if we could get funding elsewhere, but again, it is nothing certain and it is not a time at the minute to be asking people for funding. I am not hopeful at the moment to be honest.”

Over the past three weeks, what has become so apparent is the comradery that the sevens players have. They are extremely supportive of one another since it became public knowledge that the sevens programme would be no more.

That alone is a sign of a successful environment. To have 33 players on the same page and steadfast in their beliefs is quite the achievement and it is testament to the good work that Simon Amor and his staff have done over the years.

“Everyone is just a bit flat,” Gregson said. “Obviously, everyone is really supportive of each other and we are all such a close group and it is really nice in that sense. It is difficult for everyone and everyone is in different individual situations, but everyone has been there for one another and trying to keep hopeful that something is going to happen.

“At the end of the day, the Olympics is happening, the World Series is happening. I think everyone is just trying to think of that and stay positive, but that is quite difficult in the current situation.”

By this time next year, the Sevens competition in Tokyo will have just concluded. England's players must now prepare for a Games with no certainties on how exactly they will be funded to compete on the World Series, or if they will even compete at all.

Going back to play 15s has its disadvantages, too. The two disciplines have markedly different skill sets and fitness levels. For many years, the shortened format of the game has been seen as a way to develop the attributes of players, but as time has gone by, the two forms of the sport have changed with players choosing to specialise in one or the other.

That is not to say that skills are no longer transferrable. Last year, we saw Ruaridh McConnochie go from full-time sevens to a Rugby World Cup and in the women’s game, Jess Breach has thrived in 15s since leaving the sevens environment.

Going back to the Premier 15s competition for at least this season, Gregson says that her goals have remained the same despite not being able to play sevens full-time. More recently, she has even moved home and is working at a gym to supplement her rugby.

“I just want to focus as much time as I can on rugby,” Gregson said. “Trying to train as a professional, but not getting a wage. It has always been my goal to be an Olympian and despite all that has gone on, that hasn’t changed. I will try and put everything I can into it.”