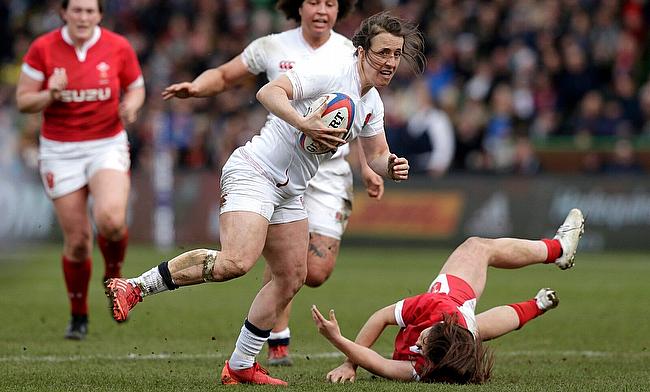 England’s Women have been nothing short of dominant in this Six Nations. Having only conceded 20 points the entire tournament, whilst scoring 165 of their own, Simon Middleton and his players end as the champions elect.

The only professional side in the women’s competition, England will not play their final Six Nations game due to the coronavirus outbreak in Italy, with the game to be rescheduled sometime in the future.

Beating Wales 66-7 at the Stoop on Saturday, it was a tale of forward dominance as the pack rolled in for eight of England’s 10 tries in West London. Poppy Cleall scored a hat-trick, resulting in the Sarries forward receiving the Player of the Match plaudits, with the conditioning and physical prowess of the England side being the clear difference between them and Wales.

“We send the big girls in don’t we?” Emily Scarratt, World Women’s Player of the Year and England captain on Saturday, said. “It is something that we spoke about in the week. We have got some unbelievable ball carriers across that forward pack and on the bench as well, so making sure we are going forward and we’re sticking to the strengths that those guys have.

“Getting Vicky Fleetwood picking the holes because she is faster than the lot of us, so it is just that sort of stuff, going back to type a little bit and making sure that we’re doing things really positively and then having the platform to play off.”

Simon Middleton was similarly full of praise for his forwards. Able to make a raft of changes for their final home game, his pack only looked at a disadvantage at the scrum, giving away several penalties to the Welsh.

The only partnership that remained was that of lock’s Zoe Aldcroft and Poppy Cleall. Also introducing Harriet Millar-Mills to the backrow and moving Sarah Beckett to number eight, England’s head coach believes that he is extremely lucky to have so many high-quality players available to him.

“We’re blessed aren’t we,” Middleton said, “We’ve got some incredible strength in depth and we keep raising the bar. Players who come in know that they have to be, not just good players, but they have to be wholly committed to their training programmes and everything.

“We have got two world class front-rows and then we have got back five players who can play second-row, back-row, are are great ball barriers, are good defenders and very, very talented players. I thought our second-row today, was absolutely immense again.

“Zoe Aldcroft has been immense all tournament as such an old head on young shoulders. Poppy’s form has been so consistent and so high, I thought that it was a very fitting way for her to finish this part of the tournament today, she was superb.”

It would be apt to describe the English system as self-perpetuating. Whilst Middleton does have 28 professional players, four members of his matchday 23 on Saturday did not have pro contracts.

With England the only nation to have full-time female rugby players, it has set them aside from their opposition. Unbeaten again this season, many see England as having left the rest of rugby behind. With a strong domestic competition as well, England really are flying the flag for the women’s game.

“The logical thing to say is; get all the home nations full-time,” Middleton said. “Whether that is practical or not, I don’t know. I think they’re doing as well as they feel that they can at this moment in time.

“The biggest difference, from what was evident today because nobody played with anymore passion than anybody else and it was the same last week with Ireland and the week before that with Scotland, the physical difference.

“We just overpowered Wales in the end and that is the product of being in a full-time environment, training every single day and recovering properly. It is tough, but it is one of those challenges that the home nations face.”

A step up in professionalism has also resulted in an increase of coverage and profile. England’s Women are now recognisable faces, with some having seen the game change rapidly over the years. One such person is fly-half Katy Daley-McLean, having made her England debut in 2007, the former schoolteacher says that all the Red Roses can do is carry on with their good performances before changes are made at the other home unions.

“All we can do is keep putting on a show, and for us, we want to be the best in the world,” Daley-McLean said. “We have never shied away from that. We are very lucky that we have full-time contracts. The Welsh girls don’t and I think all we’ve got to do is keep driving the standards of the game and hopefully their unions will get behind them because they are going to want to give them more support, so that they can be more competitive.

“You could argue that the amount of time that we have had together, the opportunities that we have had to train full-time, really started to tell and I think that is probably the difference with the other unions and the other girls. They are not getting that level of support. How do you expect them to compete as well? So, we want to keep driving the standard of the game as a whole.”