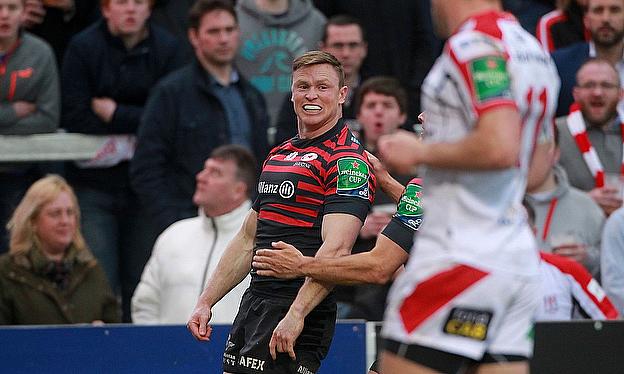 Ulster played for all but four minutes of their Heineken Cup quarter-final with 14 men but pushed Saracens all the way before being beaten 17-15 at Ravenhill.

Jared Payne was red-carded for a dangerous tackle on Alex Goode early on but despite their numerical disadvantage, Ulster led 9-5 at half-time thanks to three penalties from Ruan Pienaar.

Chris Ashton crossed for the Saracens in the 22nd minute but they could add no further score.

Inevitably, in the second half, Saracens dominated the game, scoring two more tries, through Ashton and Mouritz Botha, to move into the lead, Ulster also losing Rory Best and Pienaar to injuries.

Owen Farrell could only convert one of the tries, enabling his opposite number Paddy Jackson to kick two late penalties to bring the home side to within two points of their visitors.

However, despite a packed crowd roaring them on the final minutes, they could not force a winning play, and Saracens progress to the semi-finals, where they will play Clermont.

Saracens had the first scoring opportunity when Rory Best was penalised for going off his feet but Farrell pushed his kick wide.

The game was then delayed for several minutes after Payne challenged Goode as the Saracens full-back took a high ball, landing heavily as Payne collided with him.

As Goode was carried off on a stretcher, referee Jerome Garces consulted with the television match official and produced the red card.

Five minutes later, Best left the field but took the lead through a long-range Pienaar penalty after 15 minutes.

He missed a second penalty three minutes later and Saracens moved into the lead for the first time with their first meaningful attack which put Ashton over in the right corner.

Farrell's conversion attempt sailed wide and after Saracens missed an opportunity, Tommy Bowe hacked downfield and from the lineout, Ulster won a penalty, which was slotted over by Pienaar.

Ulster then survived another Saracens attack which broke down when the ball was lost close to their line, and with three minutes left in the half, Pienaar missed another penalty.

He was given another opportunity soon after and made no mistake, the home side going in with an unexpected 9-5 lead.

Saracens made a strong start to the second half and scored through a sweeping move started by Billy Vunipola and ended by Botha after Richard Wigglesworth picked him out on the right.

Farrell missed the conversion and after 48 minutes, Pienaar was forced to leave the field, unable to continue to play through a shoulder injury he carried into the game.

Ulster could have retaken the lead but Jackson's first penalty attempt struck a post on 53 minutes.

Andrew Trimble was the next Ulster player to succumb to injury, leaving the field after a heavy tackle on Schalk Brits in the build-up to a disallowed Ashton try.

Three minutes later, Ashton did score after a precise cross-field kick by Farrell, who then converted - his first success of the day to put Saracens more than two scores clear at 17-9.

Jackson slotted over a penalty on 69 minutes after Botha was penalised for offside and four minutes later repeated the trick to narrow Saracen's lead to two points.

They had opportunities to create chances in the final seven minutes, but Saracens held on to set up a Twickenham clash with Clermont on 26th April.