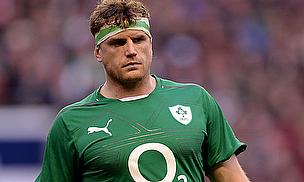 Evans steers Quins into semi-finals
Ulster are ready, and out for revenge - Trimble
We need to be at our very best ‘to even compete’ with Toulon - Reddan

Leinster captain Jamie Heaslip refused to be daunted by the challenge of taking on reigning champions Toulon in their Heineken Cup quarter-final tomorrow (6th April).

Toulon, three-times winners of European rugby's premier competition, will provide Leinster with a stern test and have not lost at Stade Felix Mayol in 10 Heineken Cup games.

Nevertheless, Heaslip says his side are used to big European games, and will not be bowed having won the title themselves in 2009, 2011 and 2012.

"We've had some whopper games over the last couple of years in the knockout stages, both home and away," Heaslip said.

"We've had a lot of good experience in Europe and we have all that experience to call on, but it's about being the best we can be on the day.

"We know what it is going to take because we've been there and experienced big away games in Europe, especially in France."

Fly-half Jonny Wilkinson will lead Toulon in what is likely to be his last European game should Toulon lose.

And while attention in the build-up has been focussed on Wilkinson and Leinster's Brian O'Driscoll facing each other one final time, Heaslip knows Toulon are far from a one-man team.

"Their whole team is littered with international players of pretty high calibre," he added.

"Whoever they pick, it's going to be a bit of a challenge for us. They have got really skillful, hard quality players who run hard, tackle hard and ruck hard.

"These are games you look forward to and get excited about because you are going up against a good quality side. This is why you play rugby.

"Everyone in this club knows what it takes to go the whole way and win the competition, so we are fully aware of the standard we're going to have to bring to the game."

"Leinster have lots of very strong players," he said.

"They have won three Heineken Cups and are almost always in the last four of the competition, so it's very exciting to play a team like that.

Elsewhere this weekend, the Amlin Challenge Cup quarter-finals conclude this weekend with Bath favourites against Brive and Wasps welcoming Gloucester.

Harlequins will play Northampton in the first sem-final after respective wins over Stade Francais and Sale Sharks.