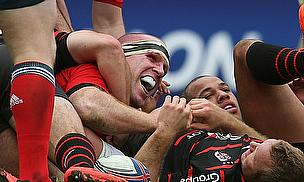 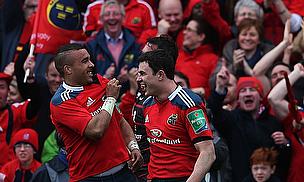 Munster were outstanding as they beat four-time Heineken Cup winners Toulouse 47-23 in front of a raucous crowd at Thomond Park.

Simon Zebo and Paul O'Connell crossed in the closing stages to cap a six-try performance which put the Irish side into their 11th semi-final in 15 years.

Keith Earls scored after five minutes to put Munster into an early 13-3 lead and they never looked back, although there were just four points between the two sides at the break.

Luke McAlister kicked four penalties in the first half but Munster would repeat their fast start when the two sides resumed, David Kilcoyne and CJ Stander both crossing in the first five minutes of the second half.

Hosea Gear and Joe Tekori replied with tries for Toulouse before Zebo and O'Connell made sure of their progress into the semi-finals.

Ex-All Black McAlister was a late call-up for Toulouse after shaking off a back injury while Munster went into the game with the team they had selected.

And they started superbly, Peter O'Mahony stealing a lineout which set up a 30-phase move which ended with Earls finishing in the corner after a looping pass from Zebo put him clear.

Ian Keatley converted only for McAlister to score his first penalty soon after got Toulouse on the board.

Keatley then punished the French forwards for a maul infringement and although Munster lost O'Mahony through injury, Stander replacing him, they continued to threaten and Conor Murray was denied inches from the line following a sniping run after another driving maul.

From the resulting scrum, another penalty was conceded and Keatley added the three points.

McAlister then scored two penalties as both teams' discipline let them down, although there were no further scores before the break.

It took Munster just 90 seconds to get the scoring underway in the second half and it was the maul that brought them success again, allowing Murray to set up prop Kilcoyne.

Stander then burrowed over in the corner to celebrate his 24th birthday in style and Keatley converted both to put Munster 27-9 ahead.

After Keatley missed his first penalty of the day, Gear galloped over for the try of the match, brilliantly set up by replacement prop Cyril Baille.

However, Toulouse were unable to produce enough to become the first French team to win at Thomond Park.

Keatley added another penalty and after Beauxis fumbled, Munster worked the ball wide for Laulala to score.

Flanker Tekori bulldozed over for a consolation score only for Munster to finish with a double score of their own, Stander turning over in the build-up for Zebo to cross and O'Connell notching up his first Heineken Cup try since 2009.