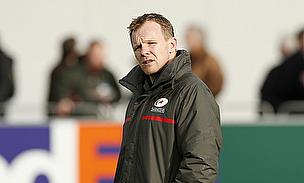 A relieved Saracens head coach Mark McCall says Ulster deserve plenty of credit after his side won their Heineken Cup quarter-final 17-15 at Ravenhill.

Ulster full-back Jared Payne was sent off after four minutes and McCall admitted that the decision changed the game.

Nevertheless, despite playing for most of the match with 14 men, Ulster led 9-5 at half-time and two late penalties brought them within two points of Saracens.

However, a brace of tries from Chris Aston, one from Mouritz Botha and a lone conversion from Andy Farrell proved enough for Saracens to win through to the semi-finals.

"Ulster deserve an enormous amount of credit after losing a man after five minutes and, not only from the effort they put in, but to also be as tactically astute and aware as they were was a great achievement and we're just lucky we got over the line at the end," McCall said after guiding his team to a Twickenham date with Clermont.

"It definitely wasn't intentional (Payne's collision) but it was reckless. You could argue both ways, but it's a big call to make five minutes into the match and it changes the match.

"At times we played some good rugby and at times our physicality was outstanding, but we kept on showing unbelievable indiscipline.

Ulster coach Mark Anscombe believes that Payne should have been shown no more than a yellow card for his challenge on Alex Goode, but was also full of praise for his side's battling display.

"When you lose a pretty important player five minutes into the game, you're always going to have your backs to the wall," Anscombe said.

"It's unfortunate. It was a collision in the air and did it warrant a red card? I think we're pretty hard done by there.

"Sometimes I think with these it's the emotion of the injury (that) creates the penalty, and I think at worst it was a yellow card. To have a red card four minutes into the game meant we were always going to be chasing our tails.

"I've got to take my hat off to the boys to hang in there and, to actually be taking the game to them and trailing 17-15 in the 80th minute, we've got to be really proud of their effort.

"Jared, the whole time, had his eyes on the ball. I mean, how's that a red card? I think that's the emotion of the injury," Anscombe added.

"You saw how difficult it was as, a couple of the tries they scored, we had numbers down. We went to the break at 9-5, which was a pretty good feat, and to keep it so close at the end... but that's the way it goes at times."