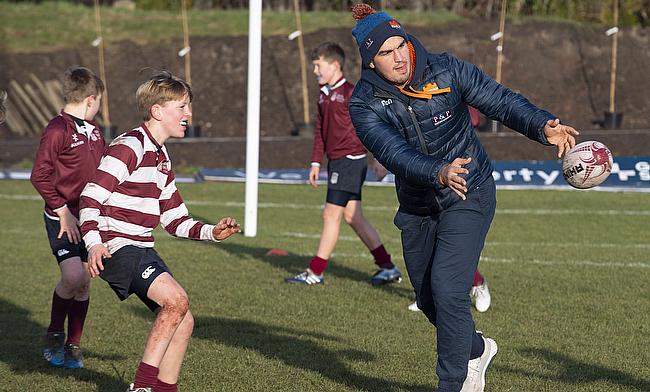 Scotland captain and Edinburgh Rugby hooker Stuart McInally admits that after World Cup heartache he “never wanting to think about rugby ever again”, but now he is “buzzing” ahead of the derby with Glasgow Warriors on Saturday.

The 29-year-old was at the helm as the national team failed to get out of the pool stages at the showpiece event during September and October in Japan.

He reveals it was the toughest moment of his career, but four weeks off after the tournament - in which he spent two and a half weeks in Australia with his wife - allowed him to recharge his batteries.

“We just found out the evening after the Japan game how long we would be off for before returning to club duty and I got four weeks which was great,” McInally told TRU.

“I went straight to Australia from Japan, my wife’s Mum and Dad live out there so as soon as I found out I was getting time off I went straight down there and my wife flew across and met me there.

Rugby World Cup 2019: Japan defeat Scotland in thriller to qualify for quarter-finals.@G_HMedia delivers his verdict after an enthralling contest in Yokohama. The World Cup continues with the Brave Blossoms as the Scots crash out. #RWC2019 https://t.co/wqfuzBc26o pic.twitter.com/jGmL7dG24t

“We had a week in Perth and then a weekend in Melbourne seeing old friends and then back to Perth for a week so that was good to clear the head and then get back to Edinburgh to do a bit of training and get back in the swing of things.

“It was the mental strain of not just the World Cup but also the eight to 10 weeks of training previous to that. That’s why I needed a bit of time to breathe and not think about strategies and practicing my throwing every day and stuff like that.

“I turned the phone off, turned social media off and just enjoyed time with family. The World Cup was such a big media thing, of course it is, it’s massive and you can’t avoid it.

“Even if you don’t read the press, you’re on social media and someone will have retweeted something and so you see everything. So, it was really nice in Australia to go out and not have to worry about having a glass of wine with your meal and just enjoy yourself.”

“It hit me pretty hard and was a big learning curve”

Scotland headed to the World Cup with head coach Gregor Townsend stating they were the fittest team in the world, but a lacklustre opening loss to Ireland put them on the back foot from the get go.

“It was an experience that I’d never had to handle before and the pressure was on us straight away after the Ireland match because we played so poorly,” McInally said about the World Cup.

“Each game became a ‘must win’ rather than us trying to build on a good win against Ireland, so it was tough.

“I mean you do two months or more of prep effectively for one game. We were so desperate to do well in the Ireland game and then to play so poorly was the hardest part because you do all that training and then think ‘what is going on?’ - it hit me pretty hard and was a big learning curve.

After the Ireland game Scotland beat Samoa and Russia, but a defeat to an inspired Japan side sealed their fate as they travelled home with their tails between their legs.

McInally, the 33-times capped player, who has his private pilots licence (PPL), rented a plane down under near Freemantle in Perth as part of his recent break, but now he is focused on flying on the pitch.

Edinburgh will be looking to go to Scotstoun and win the first 1872 Cup match of the season in the Guinness PRO14 on Saturday evening. They then welcome the Warriors to BT Murrayfield on December 28.

Check out all they key match-ups ahead of this weekend's 1872 Cup opener against @GlasgowWarriors! ???? https://t.co/SZpmVT2qrh

“It is amazing you go from after a World Cup never wanting to think about rugby ever again to then coming back to Edinburgh and getting back together with your mates you play every day with and the dynamic changes.

“The week of the Munster game recently [an 18-16 win for the Scots at the end of November] I was buzzing to get back out there, that showed to me the importance of having that extended rest after the World Cup.

“Head coach Richard Cockerill has been great to me at Edinburgh and is good to be back amongst things.

Edinburgh Rugby give back to local community

The Edinburgh Rugby squad gave a little back to the local community on Wednesday as players dropped by a number of local schools and rugby clubs as part of the club’s Principal & Prosper 1872 Cup Community Blitz.

McInally was back at his former school George Watson’s College alongside No.8 Nick Haining.

Glasgow Warriors take on Edinburgh Rugby on Saturday at 5.45pm at Scotstoun in the Guinness PRO14