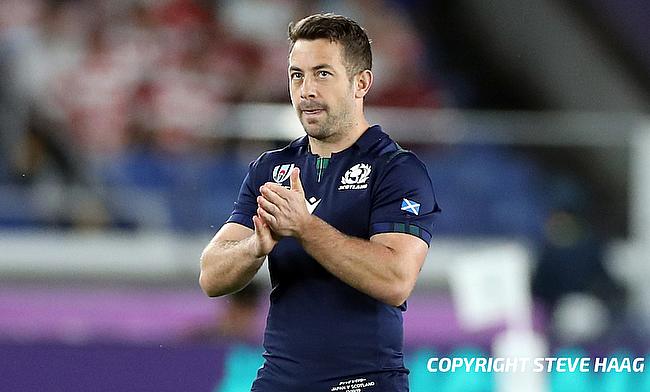 Stuart McInally: “I needed a bit of time to breathe and not think about rugby”
Scotland great Doddie Weir awarded Helen Rollason Award
Scotland wing Tommy Seymour announces retirement from international rugby
Russell and Hogg can lead Scotland revival in 2020...with a little help from their friends

Greig Laidlaw has become the latest Scotland player to call time on an impressive international career, following in the footsteps of John Barclay and Tommy Seymour.

With the 2020 Six Nations around the corner off the back of a poor World Cup campaign, it feels like the changing of the guard in Gregor Townsend’s squad.

And while it is a blow to lose three players who had a combined 207 caps between them and were stellar servants to the cause, the good news is that in their positions there are some cracking young players coming through.

The likes of Jamie Ritchie and Magnus Bradbury, along with Matt Fagerson and, in time, Luke Crosbie are ready to step into Barclay’s boots in the back-row while on the wing, Darcy Graham has already shown that he can play where Seymour did and Blair Kinghorn can also do a job there whilst Stuart Hogg is still the number one full-back.

And at scrum-half, there are plenty of options going forward. Let’s take a look at nine players who could be wearing the dark blue in the future:

The here and now

The 26-year-old Glasgow Warriors man is the most experienced of scrum-halves looking to take over as the number one choice in the pivotal position along with Henry Pyrgos.

He has 28 caps to his name and started ahead of Laidlaw in the famous comeback draw against England at Twickenham back in March.

Price made a memorable debut off the bench against Georgia in Kilmarnock back in 2016 and added a zip and excitement to the Scottish game that had not been seen in a while.

He then was accused of returning to the Warriors “sluggish” by head coach Dave Rennie after the 2018 Six Nations, but the competition with George Horne at club and country seems to have got him back to his best.

This really could be Horne’s chance to shine.

Making his name with Scotland Sevens on the World Series circuit, he is a real buzz bomb of a player who seems to run support and ‘cheat’ lines better than most as his impressive try record for Glasgow Warriors shows.

.@G_HMedia catches up with Peter Horne after a memorable day at BT Murrayfield for @Scotlandteam and the Horne family https://t.co/zpQdLph5pE #AsOne pic.twitter.com/e4SXTsG27O

He can create things which others cannot and it he can continue to work on his game management and box kicking game, then he should have a long future ahead with the national team.

Scored a hat-trick against Russia in the recent World Cup and the 24-year-old Fifer has 10 caps to his name to date.

There is no doubt that Pyrgos is a safe pair of hands and he has captained his country before. He has been to two World Cups and the 30-year-old has 28 caps for his country.

Currently, he is at Edinburgh Rugby and is battling it out with South African Nic Groom there for the starting number nine jersey.

If you want a structured game with good tactical kicking then Pyrgos may be the man, but with Laidlaw having played that type of game, Townsend may well look to Price and Horne to take a more expansive game forward in 2020 alongside stand-off Finn Russell.

When he went to the World Cup in 2015, many felt he had it in him to take the number one number nine spot from Laidlaw then.

It did not quite work out that way, but Hidalgo-Clyne is still just 26 and has plenty to offer. On his day, he is one of the best attackers seen in Scotland in the last five years and also a very useful goal kicker if needed having played 10 as a youth.

The former Edinburgh Rugby man has recently had spells with the Scarlets, Harlequins and Racing Metro and he is now on a short-term deal with Lyon in France.

The 26-year-old is uncapped, but still has the potential to go on and play for his country for sure.

The former Merchiston Castle School pupil played with Hidalgo-Clyne at that stage and in Scotland age-grade teams and, after a short spell with Watsonians, he has since been down in England at the top level with Leicester Tigers and London Irish.

He has been at Irish since 2014, has a lot of experience under his belt and is a key member of their squad. He started in the recent European match with Toulon and is a clever player.

Ones for the future

The Edinburgh Rugby man recently turned 22 and also earned a start against Agen in the Challenge Cup.

He will be learning a lot from Pyrgos and Groom in the capital and if he can continue to impress when he gets opportunities from the bench, who knows what the next few years might hold for the ex-under-20 cap who has also represented his country at sevens.

He has recently turned 21 and is trying to make the breakthrough at Gloucester having earned a full-time contract having come through the Academy ranks there.

Played for Scotland under-20s during the 2017/18 season and was one of the best performers, learning a lot during his time working with head coach Bryan Redpath during his spell in charge of that young squad.

The former Scotland under-20 cap, who has also played sevens for his country, is a very canny and intelligent operator at nine.

He was on the fringes of things with Glasgow Warriors last year and is now plying his trade in France with Scottish Rugby’s partnership club Stade Nicois. Will be interesting to see how he develops after a spell abroad.

Speak to anyone who has worked with the 18-year-old and you won’t hear a bad word said about him.

He is just 18, but has an old head on young shoulders and has taken his move from Merchiston Castle School straight into the pro ranks with Glasgow Warriors in his stride.

Should be playing for the under-20s in the upcoming Six Nations - unless he is needed at Glasgow - and is one to watch.

Laidlaw captained Scotland more than any other player - in 39 of his 76 appearances - and is the country’s second all-time points scorer (714) meaning that he the Jedburgh man will go down in history as one of his country’s greats. He also toured with the British & Irish Lions in 2017.

“It was one of the hardest decisions I have ever had to make, but when I sat back I think it is the right one for me and my family at this time as well as the Scotland team,” the Clermont man, 34, said.

“Captaining your country to victory is the stuff of childhood dreams. To say I will never again stand in the tunnel, filled with nerves, alongside my rugby family and lead my team mates out on to the pitch at BT Murrayfield, is incredibly hard.

“While my body and heart could continue playing, my head tells me that it’s time to let the team rebuild. In terms of where Scotland is now, they are in a position to spring forward and I cannot wait to give them my full support from the stands.

“To the Scotland coaches and backroom staff over the years who dedicate hours behind the scenes to prepare the team collectively and as individuals, I thank you. To the people who have helped me achieve my dreams: my team mates, my parents, sister, family, close friends and my incredible wife, Rachel, and our sons, I will be forever thankful for all the support you have shown me over the years;  you have stuck by me through thick and thin.

“I’d also like to thank Scottish Rugby and the staff behind the scenes who have both supported me as captain and a player and enabled the team to perform in front of capacity crowds.

“And finally, a massive thanks to the Scotland supporters both in Scotland and abroad for sharing the rollercoaster ride of international rugby with me. Your support was always appreciated, from messages on social media to being at the stadium, or just stopping to chat on the street. I look forward to supporting the team alongside you all at BT Murrayfield soon.”