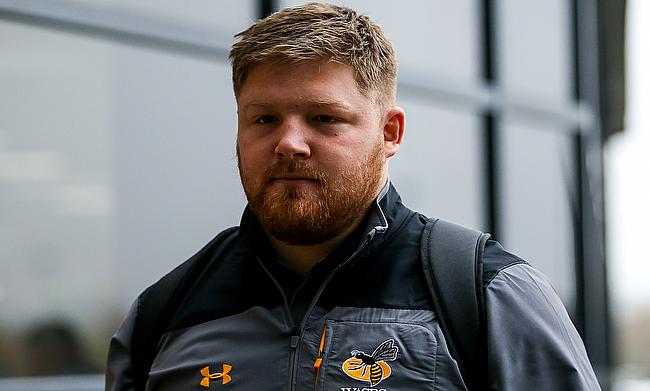 It is fitting that in a week where the University of Exeter had a very positive result in BUCS Super Rugby that one of their alumni is continuing to make his way in the professional game.

On Wednesday afternoon, Exeter’s students set themselves up nicely for the festive break by closing the gap on leaders Durham University by comprehensively beating them 32-8.

Exeter (3rd) are now just four points behind Durham whilst second placed Leeds Beckett are only two points adrift of the table toppers after a 38-3 win away at Loughborouh. There were also victories for Cardiff Met and current champions Hartpury.

From an Exeter perspective, Jack Owlett, the Wasps front-rower, would have been keeping a keen eye on social media, smiling and thinking about the good times he had with the university side between 2014 and 2017.

He is now part of the Wasps first XV squad having joined the Coventry based outfit from the Exeter Chiefs in the summer - and after a couple of recent outings in the Challenge Cup, the prop is focusing on earning more game time in the early months of 2020.

“When the chance to move to Wasps in the summer came my way, I had to weigh a lot of things up because I had been having a good time at the Exeter Chiefs, but the opportunity to come here was too good to pass up, the 24-year-old former Scotland under-20 cap told TRU.

“I am really happy with my decision and happy where I am now. I have settled in really well here, there are obviously differences from the Chiefs, but there is a great culture here and a great bunch of boys around the place.

“Before I got here, I only really knew Ben Vellacott, but I get on with all of the lads now and having had a taste of first team action in the Challenge Cup I want more of it.

“There are some good props at the club, but I just have to keep my head down, keep putting in the hard work in training and when more game time does come my way really seize that opportunity, do my bit for the team and show everyone what I am capable of.”

From Ellingham and Ringwood to the big time

Owlett’s rugby journey began at the Ellingham and Ringwood club in Hampshire where he played from under-9s to under-12s and then from there, he moved to Millfield School.

“I was 13 when I went to Millfield and rugby became a massive part of my life there,” he explained.

“During my school years I had a couple of injuries which kept me out of action for a bit at under-15 and 16 levels, but I played in the senior first XV after that. Millfield has big links with Bath, but at that stage that wasn’t an option for me so I decided to head to university to get a degree behind me and start ‘real life’ as such.

“I went to Exeter University and studied business management whilst playing for the uni rugby team.

“The rugby set-up there was great and it allowed me quite early on in my time there to gain exposure to the Exeter Chiefs environment. Playing in the top BUCS league was excellent for my development as a front-rower and I was lucky enough to be in the side that won BUCS in 2016.”

That BUCS Championship win came with a 21-19 victory over Loughborough University in the final at Twickenham with Owlett starting in a team which was captained by Sam Skinner, who has since gone on to do great things with the Chiefs and would have been at the recent World Cup with Scotland had it not been for injury.

The year before that Owlett, who was eligible for Scotland through his maternal grandmother, had earned a handful of caps for the under-20s in the Six Nations and the World Championship.

“I went into the Scottish Exiles system down south and I was close to the under-18s, but didn’t make it,” he said.

“Then I was invited back to a few under-20s camps and to play in the age-grade Six Nations and then the World Championship in Italy was brilliant.

“I played alongside guys like Zander Fagerson, Jamie Ritchie, Magnus Bradbury and Rory Hutchinson who have since gone on to play for the full Scotland squad while Ben Vellacott, who is now with me at Wasps and is recovering from injury, was also in that group.

“It was my first realisation of what professional rugby might look like and it spurred me on to go further.”

As Owlett mentioned, during his time at university he was brought into the Chiefs set-up from time to time and in his second year he played a few ‘A’ League games before really ramping up his involvement at Sandy Park in his final year of study.

That was 2016/17 and he recounts: “I was in the club at any spare moment I had from uni and it was fairly full on, but I loved it.

“I was balancing trying to get the grades needed and progressing my rugby, but it was worth it when I joined the Chiefs full-time in the summer of 2017.

“The last two years there were amazing and I had a great time and learnt a hell of a lot. Good times, but now I am focused on the next part of my career.”